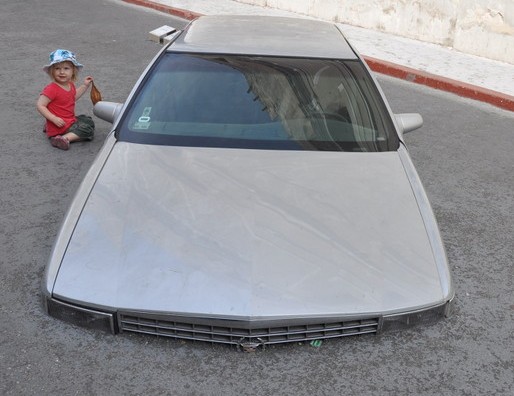 I was eating fruit and yogurt in a cafe at Waverton yesterday. I never go to Waverton. Ever. (Actually, I never eat fruit and yogurt either. But I’ve been these having bizarre cravings for weeks. No, I’m not pregnant. At least I hope I’m not … No, I’m definitely not. Crosses fingers tightly.)

An acquaintance who lives Over The Bridge suggested we meet there to save me crossing the coat-hanger. Thoughtful!

There I am, in Waverton, when a woman walks past. She stops and says, “Alana!”

And it’s someone I haven’t spoken to for ooooh, six to 12 months, but who happened to call me out of the blue a couple of days ago. We were supposed to have lunch together yesterday, but I had to cancel because I was getting my stitches out.

She works in the city, but was in Waverton for a business meeting. On that exact day and time, walking past that exact cafe.

Or fweaky, as Sprog 2 would say.

Or weally wandom, as Sprog 2 would say.

Stop it, Alana, it’s not a joke. It could be an indicator of learning difficulties … Damn, I wish she’d keep saying fweaky forever, it’s so cute.

I’ve blogged about my coincidental life before. I revisited one I wrote – called Small World Syndrome  – after my latest bizarre encounter and I quite fancied it (if I do say so myself) so here it is again:

“There’s never a good time to crash into a sporty car on the Sydney Harbour Bridge. When you’re running $5-a-minute late to get Sprog 1 from after-school care is a particularly bad time. It was Melbourne Cup Day, 2009. The owner of the sporty black car was driving home to celebrate his big win. He was furious, but fortunately didn’t swear at me, because he turned out to be the dad of Sprog 1′s kindy classmate. Sprog 1′s birthday party was two weeks later and I was mortified when he arrived at the front door. We can laugh about it now …
I live a life crammed with coincidence. It gets a bit freaky sometimes. On our recent European sojourn, we had tea with Sprog 2′s soccer teammate in the shadow of the Sagrada Familia. When I started my script-writing course, an old work associate was in the class. We live near each other, so he gives me a lift home every Tuesday. Handy. Two women I worked with at Cosmopolitan magazine 15 years ago have kids at the same infants school as mine. After my old boyfriend dumped me, we ran into each other constantly. The pub, the mall, the park … Actually, that wasn’t a co-incidence, it was stalking …
At a school mums’ dinner last week, we started comparing concidences. Two mums kicked it off with the discovery they share the same doctor several suburbs away. Another mum called Tanya, who’s married to a man called Mark, recalled her surprise when a new boy joined the class earlier this year … who had a mum called Tanya married to a man called Mark. Then Tanya and Mark and Tanya and Mark stumbled upon each other at a party on the other side of town. I offered up a mum from Sprog 2′s kindy class who turns out to be the sister of a girl I worked with 20 years ago. They also have a brother who I randomly befriend at a series of sweaty parties in my youth. Things got really weird when the kindy mum visited an old friend, who talked about meeting two lovely little girls called Sprog 1 and Sprog 2 on the beach in Newcastle. The kindy mum asked if, by chance, their mother was called Alana … Ah yes, she was.

Sadly, such co-incidences don’t run to my lottery ticket number matching the one pulled from the barrel, but I live in hope.

Moral to the story: it’s not a small world, it’s a miniscule one. I keep that in mind when strangers piss me off. You just never know who their friends might be.”