I wasn’t expecting it to be so summery in late November on the South Island of New Zealand.

The past few days have been glorious, albeit with the occasional torrential shower.

Yesterday was so lovely. We started by driving to Wanaka via Arrowtown for breakfast.

Arrowtown is so picturesque that it looks like a film set. The Main Street is filled with olde worlde buildings, set against a backdrop of verdant hills.

We’d read a rave review of a cafe down a laneway called Chop House. It lived up to the hype – we shared a plate of huevos rancheros and sipped fabulous coffee in funky surrounds.

We’d have liked to stay longer and explore Arrowtown, but we needed to get over the mountains to Wanaka so DD could do a lakeside conference call.

While he discussed serious matters on his phone I wandered around the Wanaka shops, deciding where we should go for lunch and gazing at the amazing views.

Once DD was off the hook we headed to a casual place called the Big Fig for lunch.

It’s a really clever concept – you choose a small, medium or large plate and then get the staff to load it up with delicious hot and cold food. I had slow cooked lamb with a cheesy kumara bake, pumpkin salad and an apple and cabbage slaw. Delicious!

We skipped getting a deep fried kiwi fruit for dessert from the takeaway place around the corner though and grabbed a block of Whittaker’s white chocolate with gingerbread pieces from the corner store instead. Mmmmmm!

Then we hit the road through the valleys back to Queenstown, stopping at a winery along the way to try a couple of tasting flights.

DD also gawped at some mad bungee jumpers before we returned to the hotel for another spa.

We’d been tipped off by a former colleague to try Perky’s – a floating bar on the lake. But the water was really choppy, so we decided not to risk sea sickness and did our sipping on dry land – with half a dozen oysters kilpatrick – after a quick scenic drive around part of the lake. (Bits of the drive were so beautiful I actually almost cried.)

The lady at the next table afterwards was from Te Anau and gave us some excellent tips on places to go on the East Coast, which is where we are heading today.

I’ll be a little tired though because I woke up in the middle of the night with vertigo – I turned over and it felt like the whole mattress was flipping over with me. I gave a little scream that woke DD up very briefly, but he fell straight back to sleep while I lay there feeling dizzy and nauseous for the next hour.

Any other women of a certain age ever experienced something like that?

Ah well, yesterday was such a gorgeous day – check out my happy snaps (you get the chocolate twice because I’m having trouble editing galleries on my phone): 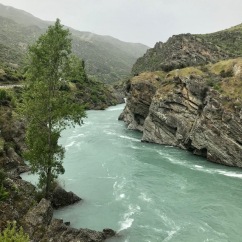 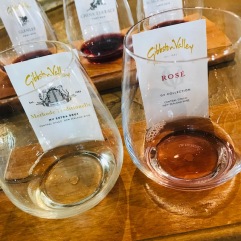