The youngest cost me $70 yesterday – after my NIB rebate – for the latest round of physio on her foot. The good news: she can probably start training again later this week. Now the swelling has gone down it appears to be a sprain rather than ligament damage. Hallelujah!

We’re heading back to the physio on Thursday to give it a final once-over.

In the meantime, the physio wants the youngest to pedal on an exercise bike every day. No problem, I thought, the youngest can come to the gym with me and we’ll do it together. I had a vague recollection that my gym offered free school holiday sessions for kids.

So I emailed Fitness First telling them about the youngest representing Australia at the World Skipping Championships and injuring herself with less than two weeks to go. I asked if they’d let her come in for a couple of sessions with me to do a little cycling.

Being big business, Fitness First gave zero Fs about a little Aussie skipper in need. They said they’d made a special allowance and let a 12 year old in – the usual age minimum is 14 – if I had a letter from the physio, but it would cost me $20 a session.

I thought that was a little steep for a quickie pedal-fest, so I rejected their not-so-kind offer and turned to Facebook for help instead, sending out a plea to borrow an exercise bike gathering dust in someone’s spare room.

A lovely former colleague of mine, Erin, answered my distress call. The only problem: she lives a bit of a hike away. But I was taking DD to the airport anyway, so I was already geared up to spend my Monday night driving.

I hadn’t seen Erin for YONKS. We had such a nice catch-up in her apartment block basement as we wedged the bike into my car. 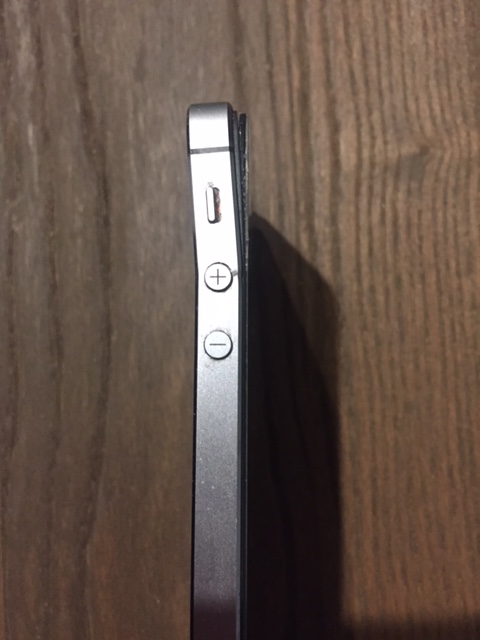 This morning, the youngest and I are ducking to the doctor to have $150 worth of Hep A injections. Ouch!

And don’t even ask me how much I’ve spent on clip-on koala souvenirs to take to Shanghai to be handed out to the youngest’s international competitors. (Apparently clip-on koalas are the de riguer gift).

Meanwhile, I was talking to the eldest in the car the other day and noticed a snaggletooth. WTF? The eldest had perfect teeth! Remember the dentist joking that I should buy them a sports car because that’s how much it was going to cost to fix the youngest’s teeth?

I didn’t think it was a very funny joke.

But now the tooth beside the eldest’s front teeth is twisting inwards. Nooooooo! We have an appointment at the dentist on Wednesday for a check and clean and I will ask the dreaded question about what the hell is going on.

I’m not sure I can afford two kids with braces. Poor single mum me.

The eldest is already costing me a fortune. On Sunday night, for example, I handed over $70 for a cinema visit. We had the eldest’s friend from the Central Coast staying and it was $37 for the movie tickets alone, plus I kicked in for their fast food dinner.

There may have been an ulterior motive for dropping them at the cinema – I hooned over to DD’s for a few precious hours before he headed off overseas for work again.

Our dinner was a budget-friendly affair. I made him posh bubble and squeak – slow-roasted lamb and pumpkin risotto using leftovers from dinner on Saturday night.

I’ve told the eldest I’ll be cooling it on the cash for the rest of the holidays. I’d make them get a job, but it’s a bit tricky with spending half the week at their dad’s place and him being opposed to sweeping floors at the tattoo parlour around the corner.

Speaking of lamb … I made a rather delicious and easy dinner for the kids last week. I got a couple of lamb loins and dusted them with dukkah, pan fried them – I like them nice and rare – and served them with grilled haloumi I’d marinated in olive oil and garlic then squeezed with lemon, plus a cous cous salad with toasted pine nuts, olives, baby spinach leaves, fresh herbs and pomegranate seeds.

Nom nom, here are the pics: 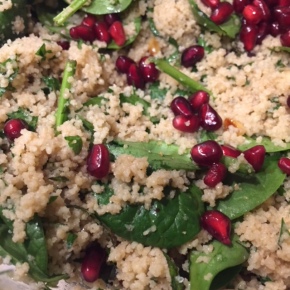 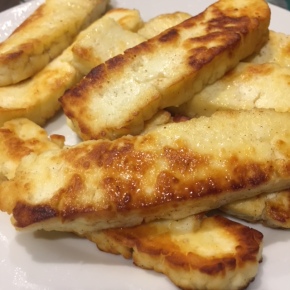 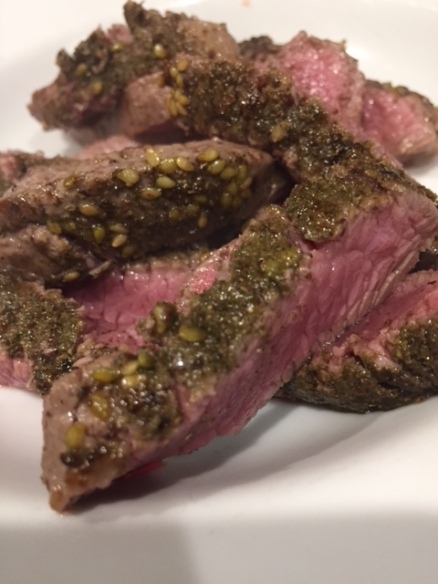 Song of the day: Bryan Ferry “The price of love”