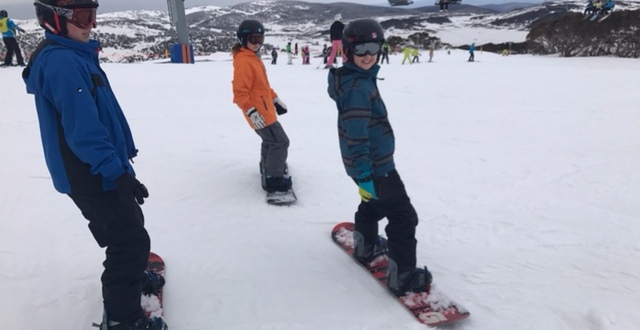 Well, just in body. My spirit might take a while to catch up. I’m crook. But more about that later.

The words started out innocently enough: “I’m taking my blogging holiday from today. I’ll be back on October 10 … wow … that feels so far away. But it’s time for a break. I’m blogged out.

“I’ll have so many cool photos to share with you on my return.”

But then I said: “Oh, and dramas. There are always dramas. I am the drama queen.”

I am also an eejit. Who tempts the universe like that?

So, yes, there were dramas. And they started on the very first day of my blogging break.

I was working from home on the second Friday of the school holidays when I got a text message from my ex telling me not to panic, but … the youngest was being snowmobiled to hospital after an accident during the final run of her ski trip.

My ex sent five-minute updates, letting me know that the youngest could still move her fingers and toes so he thought everything would be fine.

It’s pretty freaky to be getting text messages like that when there’s not a single thing you can do to either comfort or help your child.

So I decided to stay very calm and just wait for the storm to blow over and bring whatever damage it would, then deal with it.

Fortunately, after X-rays and various medical examinations, the youngest was released with a verdict of whiplash and told to take it easy for a few weeks.

I got the full story from my ex when he returned her to me last week. He said it was terrifying. She did something called a “scorpion” on the slopes, which isn’t the name of a cool snowboarding move, it’s what happens when you faceplant at speed and your board swings up and thwacks you in the back of the shoulders or head.

The youngest disputes her father’s version of events and insists there was no “scorpion” – she just had a bad fall.

But what they both agree on was that she couldn’t move afterwards, which was why the snow ambulance was called. They were worried she had spinal injuries and had to put her on a board to transport her to hospital, where her cousin was already being treated for a suspected broken wrist … talk about bad luck.

The eldest even seemed a bit rattled by snowboarding down the hill to see her sister being put into a body bag … which is apparently part of the procedure when you have an accident on the ski fields.

I think it gave my ex the fright of his life to see his little girl being carefully placed in that bag and then winched off the snowmobile at the hospital with a giant claw and gently placed on a bed.

But he said that the youngest, while initially scared, was soon back to her cheerful self.

She was very chipper when she got back home three days later, though complaining of a sore neck, and went to bed that night singing Zippedy Doo Dah.

She’s one of a kind. She’s also not the least bit put off by her accident and remains super keen to snowboard again next winter.

So that was the first drama. I’m too sick to tell you the rest. You’ll have to wait until tomorrow.

I’m such a tease, but really, I need to lie down.

How have the past 10 days panned out for you?

Song of the day: Fleetwood Mac “Landslide” (again, because I’m too sick to think of other songs about snow)

6 thoughts on “The first drama”