“She used to have a carefree mind of her own, with devilish look in her eye”

A few months ago, I blogged about my late Nan’s birthday and started missing her all over again.

This week, I was flicking through an old photo album, looking for a shot of my dad to post on Facebook for his birthday.

I saw a photo of Nan on my first birthday. We looked so much alike she could have been my mum.

Look at those matching blood nuts!

My mum, dad and sister all had dark hair – dad’s was jet black – and then there was carrot-topped me, just like my Nan. If it wasn’t for her having red hair I’d have sworn I was adopted … actually, I did fret that I was adopted. But, as I’ve grown older, I look and sound way too much like my sister and mum not to share their genes.

As my Nan grew older, my fear that something would happen to her grew stronger. I was terrified to move to Singapore and later to New York in case she passed away while I was gone.

Something DID happen while I was in NY that was – in a way – worse than dying. Her mind became clouded by dementia and she moved unwillingly into a nursing home.

When she died, she hadn’t really been Nan for a very long time, just an angry shell that looked like her was left.

I was still gutted.

My dad and I scattered her ashes a few years ago – and I accidentally scattered them all over myself as well as the Myall River – as my mum and the kids looked on. They didn’t really know Nan, they were only little when she died and she was a bit scary looking – she’d had a skin cancer taken out of her forehead that left a giant crater. We’ve speculated the operation hastened her mental decline.

The youngest has no real memories of my grandmother. The eldest remembers very little either.

But, as we stood on the shore at Hawks Nest, near where she used to live, I pointed out landmarks from tales I’d told the kids about my childhood – there’s the sandbank where Aunty Kathryn cut her foot … here’s where we caught guppies in buckets … those little balls of sand are made by the crabs digging … Nana Peg would wake us at 6am to swim in the king tides, the water would go right up to those boats resting on the grass … my great-grandmother lived on a houseboat that was beached just over there …”

And I remembered all the cool things she did for my sister and I as kids.

Like making our own meat pies on dinner plates and decorating them with the homemade pastry off-cuts.

And making a heart-attack-inducing slice every time we came to visit – biscuit base, caramel filling, Dessert Whip topping and sprinkles.

Packing picnics of cold pie and heart-attack slice and wandering along Hawks Nest beach to the base of Mount Yacaba to hunt for cowrie shells in the rock pools.

Filling an old wash-tin with sand and salt water, then adding guppies and brightly clawed crabs caught among the mangroves on the riverfront.

Buying mullet and bream from a local fisherman, tossing them in flour and Season-All and frying them with hand-cut chips in well-used oil. Then getting us to debone a special piece for Choo-Choo the dog to scarf down.

Growing peaches and plums and lemons and mangoes and mulberries in the backyard and eating them straight from the tree.

Cultivating a mysterious and overgrown “fernery” for us to explore down the side of the house.

Waking us at dawn to swim in the Myall River during the chilly king tide.

Feeding us so much junk food on school holidays that we’d get heartburn.

Letting us watch so much TV our eyes went square.

Challenging us to endless games of Scrabble and dominos and Five Hundred.

Buying us holiday pets – guinea pigs, ducklings that mysteriously grew into geese, cockatoos … then tending to them once we’d gone.

So I thought I’d dig out a few more photographs from those happy holidays with my Nan and Pop – first in Cessnock, then at Hawks Nest – and take you for a walk down my memory lane. The quality is pretty bad because they’re on slides that I’ve held up to the light. I need to get a slide scanner. 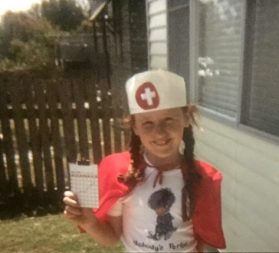 I escaped to so many imaginary worlds at Hawks Nest, from old clothes as dress-ups to costumes Nan would buy us.

I still fail to understand why these things were so popular.

I would make endless Lego houses and Nan would take endless photos of them.

We spent a loooot of time at the beach.

Nan bought us a second-hand canoe to explore the Myall River.

Trying on the wedding dress belonging to my mum.

Hawks Nest was filled with flannel flowers, they were her favourite.

Mum liked to dress us in matching outfits for visits to our grandparents. 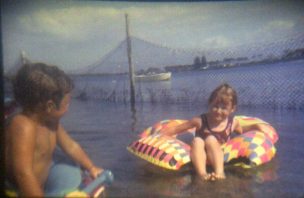 Swimming at the waterhole.

On one of our holiday adventures.

Geez I miss her.

2 thoughts on “Bubbling back up”