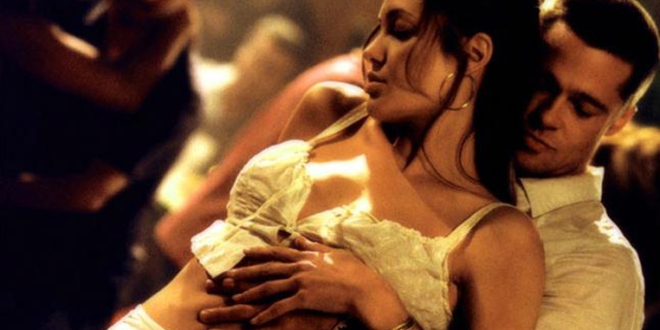 “He makes his choices. He can do—whatever. We’re divorced, and you can see why … Brad is not mean-spirited; he would never intentionally try to rub something in my face. In hindsight, I can see him going, ‘Oh—I can see that that was inconsiderate’ … There’s a sensitivity chip that’s missing.” Jennifer Aniston, Vanity Fair, 2005

While my musings about Sandra Bullocks thighs are get all the clicks at Housegoeshome, it’s Jennifer Aniston I can’t stop thinking about these days.

I never felt much girly solidarity with Jen, but the events of the past few months keep bringing her “sensitivity chip” comment to mind.

She was referring to ex-husband Brad Pitt and his poor handling of their marriage break-up.

The Brad/Jen/Ange saga also happens to be a belting yarn. So why don’t we revisit it together?

At the time, I was the editor of Woman’s Day, and we were totally beside ourselves over the love triangle. There had been rumours for months that Brad and Angelina Jolie were an item, so my mouth dropped to the floor when I saw photos of Brad and Jen on holiday together on the Caribbean island of Anguilla on New Year’s Day.

It looked like the most romantic of reconciliations: so many poignant kisses and tender moments …

Little did we realise that before they even landed in the island paradise their five-year marriage was kaput. In fact, Brad’s publicist had already informed People magazine of the couple’s plan to “formally separate”.

The executive editor of People, Peter Castro, later revealed: “They knew long before they took this vacation that they were not going to remain together, or at least separate. And they decided, you know, we told Courteney Cox and David Arquette, their best friends, we were going on this trip … let’s go ahead and make the best of it and see what happens.”

What happened was a formal statement was released soon after, announcing their parting was “the result of much thoughtful consideration,” that it was not caused by “any of the speculation reported by the tabloid media,” and that they would remain “committed and caring friends with great love and admiration for one another.”

When asked about the no-one-is-to-blame part of the announcement by Vanity Fair, Jen replied: “What we said was true —as far as I knew. We wrote it together, very consciously, and felt very good about it. We exited this relationship as beautifully as we entered it.”

Yes, Jen knew that Brad had feelings for Ange after the pair spent 2003 and 2004 filming Mr & Mrs Smith together.

When the Pitts split up, Brad insisted he hadn’t slept with Jolie, and Aniston accepted his denial. “She wasn’t naïve,” says Kristin Hahn, an executive at the Pitts’ production company, Plan B. “She’s not suggesting she didn’t know there was an enchantment, and a friendship. But Brad was saying, ‘This is not about another woman.'”

But Ange has since revealed to Vogue magazine that: “Because of the film, we ended up being brought together to do all these crazy things, and I think we found this strange friendship and partnership that kind of just suddenly happened. I think a few months in I realized, ‘God, I can’t wait to get to work’

“Whether it was shooting a scene or arguing about a scene or gun practice or dance class or doing stunts — anything we had to do with each other, we just found a lot of joy in it together and a lot of real teamwork. We just became kind of a pair.

“And it took until, really, the end of the shoot for us, I think, to realize that it might mean something more than we’d earlier allowed ourselves to believe.”

Brad didn’t spare Jen in his haste to go public with Ange. In April 2005, bombshell paparazzi photos of Brad, Ange and her adopted son Maddox on a beach in Kenya surfaced. And there were murmurs that the couple had tipped the photographers off themselves. How else had they been discovered in such a remote location?

And then, on July 1, 2005, Brad made the biggest missing-sensitivity-chip move of them all. This … 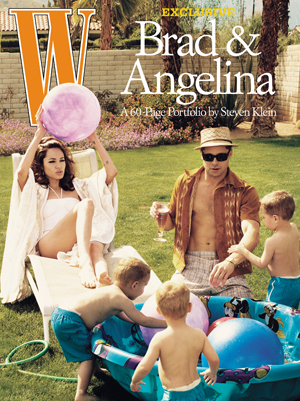 He’d orchestrated a phot0 shoot for W magazine – to publicise Mr & Mrs Smith – of himself and Ange playing happy families with a gaggle of kids, called “Domestic Bliss”. It cut particularly deeply for Jen because the gossip doing the rounds was her marriage had ended over her refusal to have kids (which she has angrily denied).

A friend of Jen’s said: “You want to shake the shit out of him and say, ‘Your timing sucks!’ He’s made some choices that have been tremendously insensitive.”

So how did she cope with it all?

She also did some soul searching for a deeper meaning in it all.

“I have to think there’s some reason I have called this into my life,” she said. “I have to believe that—otherwise it’s just cruel.”

But she dusted herself off and got on with it: “Am I lonely? Yes. Am I upset? Yes. Am I confused? Yes. Do I have my days when I’ve thrown a little pity party for myself? Absolutely. But I’m also doing really well. I’ve got an unbelievable support team, and I’m a tough cookie.… I believe in therapy; I think it’s an incredible tool in educating the self on the self. I feel very strong. I’m really proud of how I’ve conducted myself.”

4 thoughts on “Missing a sensitivity chip?”