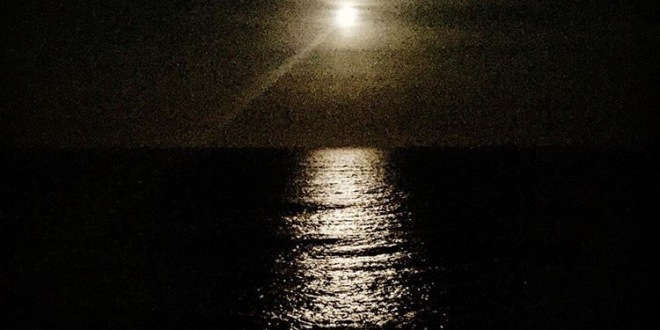 I watched the moon rise over the water last night while sipping sparkling wine with a man who wasn’t DD.

It sounds a bit suss, but let me explain …

When my ex and I lived in New York we met a family at the kids’ preschool who were moving to Sydney. I was initially nervous because they were both so fiercely intelligent … one of them is an astrophysics professor … but we became good friends.

I’ve kept them in the divorce, not because they like me better but because blokes can be a bit slack at maintaining friendships.

Anyways, the male in the couple is a regular reader of my blog and (therefore) knew I loved a night walk. His wife and kids are overseas for the school holidays, DD has headed to Brissie for a mini break with his daughters and my kids are still with their dad, so he suggested we go for a wander.

We almost cancelled because the rain was pelting down earlier in the day, but as I left work the skies were clearing, so we kept to Plan A and I took him on the school mums’ walk I do every Saturday morning.

After about 20 minutes the rain started pouring down again, but we’d warmed up so we decided to soldier on. He’d brought along a sparkling wine he thought I might like – having noticed how much Prosecco I imbibe with DD on the blog – so I took him down to a boat ramp with a lovely view of the water and we cracked the screw cap (now there’s a sensible innovation) and sipped a plastic cupful each as we watched the glorious moon rise.

It sounds romantic, but it was just two friends talking a mile a minute about life, the universe and everything.

Speaking of the universe … You’ve probably presumed he’s the astrophysicist in the relationship … because that’s the way the gender bias cookie crumbles … but it’s actually his wife. She’s an awesome role model for girls wanting to become scientists, I really need to organise for her to visit my daughter’s high school and talk to the students.

Like me, the astrophysicist also has close male friends. Like me, it’s not a Harry Met Sally scenario. We just enjoy their company.

I approach conversations with men by treating them as equals. People are just people when it comes to chatter, I’m oblivious to gender.

I dive into conversation and have fun. I’m pretty hopeless at talking about sport, but it’s not hard to find other subjects both parties are happy to discuss.

I’ve always had male friendships. My first bestie was a boy called Scott – we’d walk to primary school together each day.

I don’t think life would be nearly as enjoyable if I didn’t have great male AND female friends. I’m not a fan of the way social occasions tend to split into male and female camps. I think it’s more fun to mix up the sexes. (DD is the opposite. He has a couple of female friends, but he’d rather talk to men at a party. Nup, don’t get it.)

Anyways, that’s a long-winded way of saying I had a great night, despite getting drenched – thank you to my friend for suggesting the trek.

Song of the day: The Waterboys “The whole of the moon”