Our trip to New Zealand ended with a little luxury and a lot of terror. But let’s start with the fun stuff …

DD has some Hilton hotel points that were about to expire, so he used them to book us a room at the Hilton Queenstown to celebrate our last night away together.

The hotel had gorgeous views of the lake and our room was very luxe, with its own fireplace surrounded by comfy couches and a picturesque balcony. The king-sized bed was up a few carpeted steps and looked out at the scenery.

There was also a flash bathroom almost the same size as my living room.

After checking in we headed straight to the Pinot Pit – a circular outdoor seating area beside the lake with a fire pit, where I sipped pink NZ bubbles and failed to take a selfie where I looked less than 60, so you’ll have to make do with one of DD. 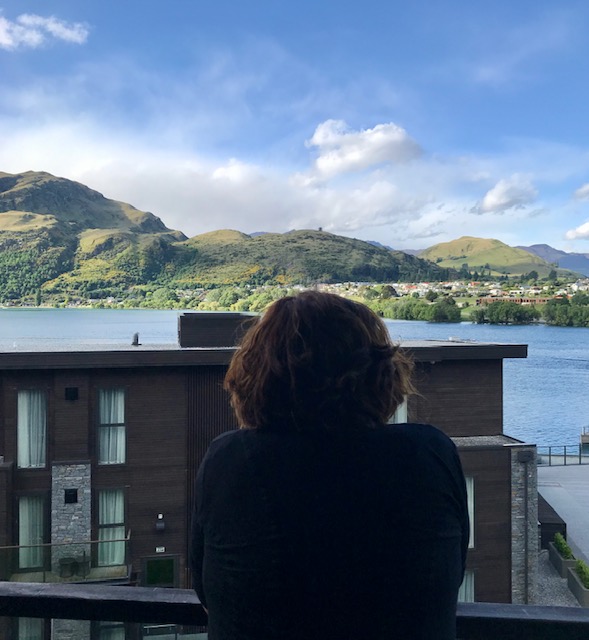 We felt lazy after our big week so we had bangers and mash at the Hilton’s on-site pub, then crashed out for an unprecedented eight-hour sleep.

We woke to torrential rain and decided to head back to Arrowtown for brekkie at Chop House, which is the most fabulous find.

My corn cakes were divine. 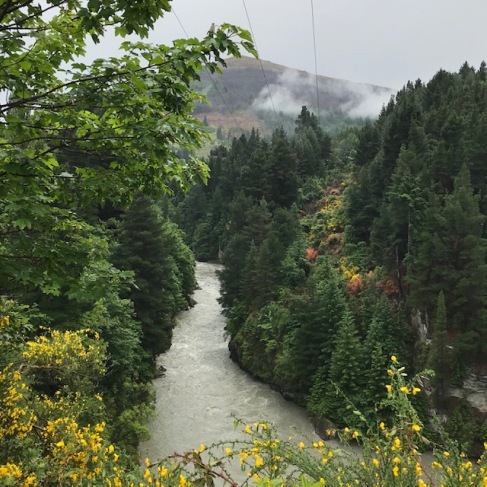 Then we pootled around the pretty countryside before heading to the airport, feeling so relaxed that we forgot to take the hire car keys back until DD had a last-minute realisation as we were about to head through the scanner at customs.

Afterwards, we sipped some farewell bubbles and nibbled sausage rolls in the departure lounge and toasted an excellent getaway.

Things got a little hairy on the runway when the plane had to taxi back to the terminal because of a problem with wind and the plane being too heavy. The ground staff had to remove a literal ton of luggage from the aircraft before the pilot could made a second attempt at take off.

I’m not the bravest of flyers, so I was a bit anxious about the situation. Make that petrified. I lost the plot a little, freaking out about whether the plane was STILL too heavy as it launched into the air. DD’s hand probably bears some scars from my fingernails digging in.

But, other than enduring a two-hour delay, we made it back safely to the real world – which was quite a shocking return with the bushfire smoke hanging so heavily in the air. The red sun as we landed was really eerie.

OK, I’d better get cracking on prepping for work.

Luckily there’s a teachers’ strike today, so it’s just me to get out of the house on time.

Anyways, thanks for being my virtual travel buddy over the past week.

I’ll let you know how I reassimilated tomorrow.