The youngest and I have been watching rom-coms all week, which makes a nice change from that underaged auto-erotic sex scene in Breath.

Oh, and There’s Something About Mary, which is more comedy than romance and resulted in me rolling around in helpless, hysterical laughter on the couch while the youngest stared at me in bemusement – I’d forgotten Matt Dillon is such a slapstick comic genius!

I also absolutely adored revisiting Bridget Jones, despite it being quite flawed, I have a soft spot for – phwoar – Colin Firth. And Hugh Grant is deliciously naughty in it. I could watch them fight over a woman forever.

But I still don’t quite buy Mark Darcy falling in love with Bridget. Do such polar opposites really attract?

Anyways, none of them hold a candle to When Harry Met Sally, which just celebrated its 30th anniversary last week.

Reiner told Couchsurfing‘s Lola Ogunnaike as they watched the ending together: “Now, this is interesting that we’re watching this scene because I’d been married for 10 years, I was single for 10 years and making a mess of my personal life, in and out of relationships and not being able to make anything work.

“And when the first draft of the script, or the draft we were going to shoot, Harry and Sally don’t get together. They meet each other years later and walk their separate ways.”

That all changed when he met his wife.

“I met my wife while making the movie and we changed the ending and this is what we came up with,” Reiner said. “Billy came up with some of this dialogue and that’s how we decided to end the movie, that they do end up together.”

A writer at Jezebel is really pissed off about his revelation and writes: “When Harry Met Sally was a perfectly decent movie, but you know what would have made it a great movie? If it hadn’t resulted in the extremely dull, extremely hackneyed conclusion of its protagonists winding up together. I’m so tired of happy rom-coms I could scream! How is it that My Best Friend’s Wedding is the only film to accurately depict the incredibly common phenomenon of a relationship just not working out? Not because someone dies, or has to leave Vienna? Or Italy? But because of the much more banal reality that sometimes, it just…doesn’t?

“Turns out When Harry Met Sally was on the verge of being a great movie, but director Rob Reiner decided to screw it all up.”

But I love a happy ending in a movie, so I’m glad When Harry Met Sally went with one.

I’m a sucker for the “you complete me” and the “just a girl standing in front of a boy asking him to love her” and “I like you very much, just the way you are” lines.

That’s the whole point of rom-coms – to give you hope it can all work out in real life. Everyone needs hope!

I’ve loved all the movie happy endings this week: Hugh getting Julia, Hugh getting Martine, Hugh losing Renee to Colin, Paul Bettany triumphing on and off the tennis court …

I’ve been so smiley and glowing as I turn the tellie off each night. Keep them coming!

Speaking of which … some brave fans of WHen Harry Met Sally went to the iconic Katz’s Delicatessen in New York where Ryan’s infamous orgasm scene was filmed to participate in a fake orgasm contest last week. 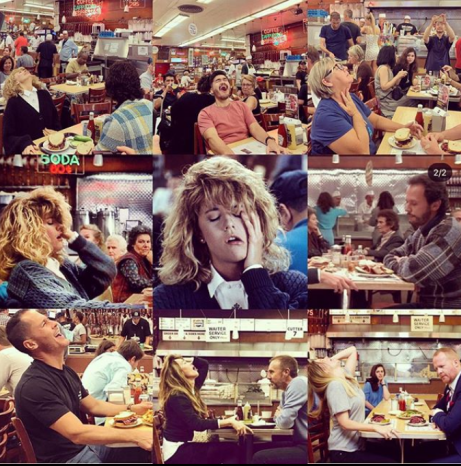 Have an awesome weekend.

Song of the day: Split Enz “Message to my girl”

3 thoughts on “Wanting the happy ending”