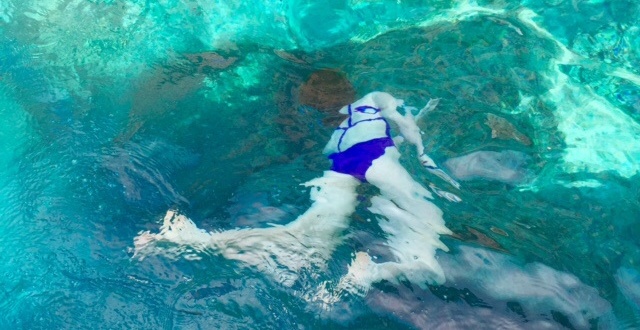 Things went slightly pear-shaped after my party – there hasn’t been time to tell you about it until now.

I did something really stupid.

Exhausted and a little post-party overwrought, I jumped into the ocean for some water therapy on Sunday and got myself into a spot of bother.

I raced into the waves ahead of DD, long after the lifesavers had gone home, and found myself suddenly out of my depth. I was sure I could see a sand bar ahead so I started flailing towards it … instead of flailing back to shore.

But I couldn’t find that damn sand bar and my arms started giving out. As you may remember from previous blog posts, I’ve never learned to swim, despite endless childhood lessons.

DD was searching for the sand bar too – with his cousin Denise – when I put an arm up to let him know I needed heeeeeelppppp!

He swam to me, I grabbed him, he suggested not wrapping my arm tightly around his neck, and he took me to shore.

What surprised me was that I didn’t panic. Not even the teeniest shiver of fear.

I knew couldn’t stay afloat much longer, but I also knew DD would rescue me.

But I was stupid to have gone out beyond my depth when there were no lifesavers around.

Unfortunately, while DD was saving me, his cousin started going under and had to be rescued by two blokes. She’s a good swimmer in pools but, being Canadian, doesn’t have much experience with surf.

It gave her the fright of her life.

I’ve felt absolutely terrible about it ever since.

I cheered up slightly on Monday morning when my workmate Alison made me this birthday cake. Can you guess what it’s supposed to be? 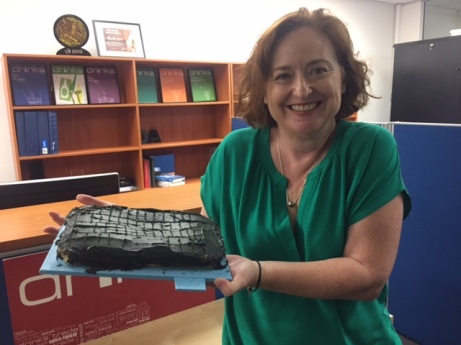 It’s my work keyboard – there are no letters on the cake because I’ve worn them off the real one with my frenetic typing! 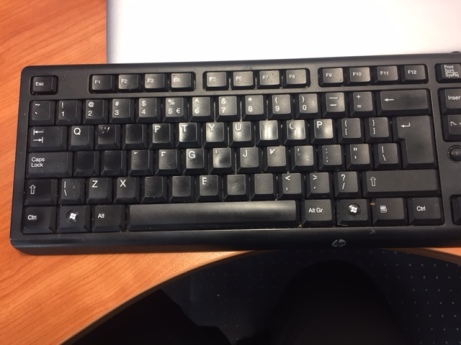 But things went belly up in the afternoon and DD had to rescue me AGAIN.

I got stuck on a train platform during an electrical outage in a heatwave after forgetting to have lunch. Not a good combination. Waaaaaaahhhhhhh!

DD answered my distress call, picked me up and drove me north so I could get back on the (sea) horse.

Except the damn sand was covered in blue bottles and I refused to go in. I had a brief self-pity weep before eventually edging into the water after DD assured me the bluebottles were all gone.

It was nervous making and nice.

I didn’t want to get back in my hot work clothes, so I dug around in DD’s wardrobe after having a shower and donned a pair of his undies and a T-shirt.

DD’s son gave me a lift home after a takeaway Chinese dinner. I was feeling very cheery about my borrowed attire until steam started wafting from his engine and we had to pull over at a service station for coolant and he couldn’t find his debit card and I ended up squatting on the pavement in a pair of mens’ underpants, peering under car seats with my phone light …

I woke yesterday morning at 4am in a lather of speech regret, followed by angst over my dad having major surgery a few hours later. My sister is on long service leave, so she headed up to support my mum in the waiting room.

Dad seems to be doing fine.

I came good around lunchtime yesterday. It feels wonderful to come good.

This morning I’m off to work at 6.30am for a network breakfast thingy.

Song of the day: Gloria Gaynor “I will survive”

4 thoughts on “I did a really dumb thing”