Every now and then I forget it’s a mistake to get plastered. Sure, it’s bulk fun at the time, but the next day is a bitch.

Saturday was one of those times.

It started innocently enough. I walked to a local bar to have an “early drink” with my sister after she finished work … It ended with me texting DD five hours later to say “I’ve made some bad choices.”

My first choice wasn’t too bad. My sister and shared a bottle of pinot gris, a chinwag and some salt and pepper squid in the late afternoon sun. Noice!

Things got a bit questionable when we ordered two extra glasses of Pinot Gris  because we were having such a lovely time and didn’t want it to end just yet.

Then we wandered back to my sister’s place, where she announced we should sit in her spa and drink the expensive bottle of champagne she’d been given by a colleague.

It was from a Champagne house called Ruinart, which is a pretty apt description for what I felt like the next morning.

(As an aside, Ruinart comes in a clear glass bottle, which is the real reason it has to be sold in a nice box, not because it makes it look fancier. The box protects it from something called “lightstrike”, which happens when UV light transforms amino acids in wine into unpleasant smelling compounds such as Dimethyl disulphide. Piper Heidseick has just announced its switching to brown champagne bottles to try and combat it. Not quite as sexy as green … You can read more about it here.)

My sister and I had a fabulous time drinking expensive champagne and chitter chattering.

But it was … unwise … of me to drink expensive champagne in a spa after already downing a bottle (and a glass) of Pinot Gris.

I have a vague recollection of tottering through the suburban streets to my house … then nothing until I woke up with a raging headache and cockie’s cage mouth at 3am. (According to DD I sent my last drunken “bad choices” text to him around 9.30pm.) I blearily checked my messages and saw one from him saying I should drink lots of water and sleep. I don’t think I did the lots of water drinking thing. So I stumbled out to the kitchen to rehydrate my remaining brain cells and pop a Panadol, then managed to fitfully sleep until around 6am.

I was not up for planking during my 8am gym class on Sunday morning  … blerg … and I felt pretty seedy as I headed up to Avalon to spend the afternoon with DD. Poor DD.

He fancied a ferry ride, so we headed across to Ettalong on the most glorious, sunny, sparkly day. Even a hangover couldn’t dent how gorgeous it was on the water. We had fish and chips at a waterfront restaurant and I sipped a hair-of-the-dog cider. I felt very lucky – and only faintly nauseous – as I sat with my feet on the stone wall overlooking the sea.

On our way home, DD pulled over at Avalon Beach as he knows how much I like taking photos of the sea spray. We decided it was a bit too chilly for a dip … though I’m regretting that a bit now. As we were snapping away at the waves (competing to see who could get the best pic) we were alerted to the fact a big chunk of the headland had collapsed. You can see it in one of my shots below.

Apparently the whole of North Avalon shook as it fell and Geoscience Australia’s network of seismometers detected an earthquake of 1.8 on the Richter scale!

And that was my weekend … ending with a bang … how was yours?

Here are my bit-too-happy snaps … 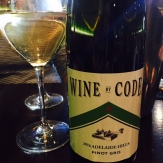 Me enjoying the first bottle … 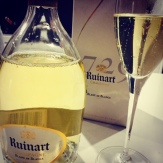 Feet up at lunch with a fabulous view.

Our fish and chips.

Surfer selfie at Avalon Beach on our way home.

Song of the day: Carole King “I feel the earth move”