Waaaaaaay back in the ’80s I loved a weekly comedy show on the ABC called “The Big Gig”. Do you remember it?

Most of the jokes have floated away in the ether of time, but one vignette remains: a bloke wearing a fez with the top cut off. He had a huge spoon and pretended to eat his brain. The gags became more and more garbled the more he ate.

“The Big Gig” featured a trio of blokes called The Doug Anthony All Stars.

I quite fancied one of them, Paul McDermott. I met him once in a bar in Kings Cross. I was working at Cosmopolitan at the time and we had a brawl about the magazine’s place in the feminist landscape.

I was equal parts annoyed and turned on by the argument – it was VERY sexy.

On the other hand, I regarded Paul’s cohort, Tim Ferguson, with antipathy. I interviewed him once, unaware that he specialised in lying to the media. He absolutely caned me for a story I wrote, filled with inaccuracies he’d fed me. Apparently I was supposed to “check my facts” if I was a decent journalist.

I was outraged. I thought if you interviewed someone about themselves then you could trust them to tell the truth and not have to check it. Thinking about it still makes me cranky, 20 years later.

So, when DD announced we were going to see The Doug Anthony All Stars live, I had mixed emotions. I was quite looking forward to perving on Paul McDermott (see 50-year-old men are really hot), but my eyes were narrowed by the prospect of reacquainting myself with Tim Ferguson.

My feelings were complicated further by Tim being confined to a wheelchair by MS.

I got all angsty about whether it morally wrong to intensely dislike someone who has suffered so much? Hmmmmm ….

Little did I know that was the least of the moral dilemmas I would face at the Doug Anthony All Stars gig.

The tour is entitled “Near death experience” and Tim joked at one point on stage that he would be the next person in the room to die. Eeeek.

Tim has decided to make MS the main thrust of his schtick. He told The Daily Telegraph in 2014: “MS is my main topic on the show. The thing about MS is no one knows what it is or what it does. I find MS funny and it’s something I have to laugh at as it’s better laughing then sitting down and crying.”

He also told The Northern Star: “Death is the funniest topic, because it’s the thing that dwells at the back of everybody’s mind. The older you get the more it moves to the front of your mind.

“Our show aims to hurry up and start living, stop worrying about the trivia of their lives.

“Death is very funny because it ties to mortal terror, and mortal terror is hilarious, because laughter and fear come from the same place in our brain.

“Laughter is spontaneous, we make noise, and if we laugh a lot adrenaline and endorphins are released, our breathing is affected and we wet our pants if we laugh long enough, and we do all those things also if we are terrified.”

His disease appears to have progressed quite rapidly since then. He told ABC News: “I don’t mind calling myself a spastic cripple because technically, as far as the dictionary’s concerned, it’s true. Laughing about something makes you higher than the thing. It puts you above whatever it is that’s scaring you.”

He also joked about spending weekends in a nursing home to give his wife some respite from his care.

I sat there wondering which parts of the routine were purely for laughs and which were harrowingly true. My laughter became uneasy in the face of such biting reality.

As for Paul McDermott, he looks like a self-described garden gnome at 54. He still sings like an angel though. And somehow manages to remain sexy under all that facial hair.

He performed an extended routine towards the end of the show about Allan Seale. Do you remember Allan Seale, the celebrity horticulturist? Kinda obscure – he died in 2001 – I expect it was completely lost on anyone under the age of 45, but at least it didn’t involve laughing about pain and death. Some women-of-a-certain-age who were sitting behind me totally lost it – they thought it was hysterical.

Verdict? I’m not sure I would choose to see the Doug Anthony All Stars live again. I think I’m a comedy wuss: I like my laughs a little less laced with pain and trauma.

But it was definitely a fascinating performance – I really admire Tim Ferguson’s strength of character in the face of adversity – and I got to cuddle up to DD for a few hours, so win-win.

Do you have a favourite comedian?

Song of the day: DAAS “Throw your arms around me” (soooooo beautiful)

PS Speaking of awkward and inappropriate, I almost cried laughing over my workmate Alison’s latest creation (See People are So Freaking Funny for the back story) for our co-worker James on Friday … can you guess what it is? 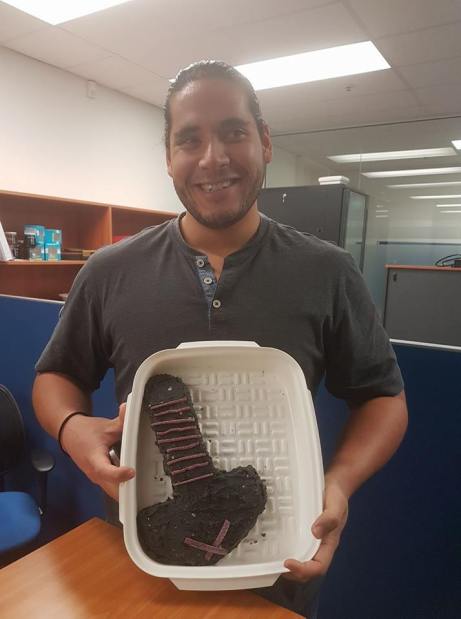