Our senior administration officer totally cracks me up. She has a quirky sense of humour that ensures a day at work is never mundane.

Her hosting of the Kris Kringle totally made our office Christmas party. Not to mention her contribution of a collapsible camping kettle being the gift of the day.

When Alison joined the drinks association last year, we had no idea she was a passionate baker.

She even has her own Facebook page, The Cakes Woman’s Weekly Rejected, to showcase her talents. It’s AWESOME.

Her baking career was born in 2001 when she started working for an organisation that was going through a cultural change as it transitioned from being government-funded.

“In an effort to build team morale, a colleague and I were given the unofficial responsibility of being ‘Monthly Birthday Morning Tea’ coordinators, with the strict instructions to keep costs down. So we decided we’d make the cakes ourselves,” Alison recalls.

“Keen to impress, my first few cakes looked like average homemade cakes, but as I became more comfortable in my role, I ignored basic baking principles and the presentation of my cakes descended into what can at best be described as culinary mishaps.

“As I presented the cakes to my co-workers, there was an air of anticipation and wonderment, ‘could it really be as bad as last month?’ We’d all have a chuckle and my fellow coordinator and I would laugh as we cleaned up, as there were never any leftovers.

“Then motherhood hit and I was exposed to the world of competitive cake making, where a weary mother living on three hours sleep and icing mixture presents a glorious theme-appropriate construction, only for it to be destroyed in a matter of minutes.”

Her first effort was the pink elephant cake from The Woman’s Weekly Birthday Cake Book for her daughter’s 3rd birthday party,

“I pulled the cake out of the oven just as the first guest arrived, and went straight into icing it. What resulted can only be described as a runny mess. I thought it was funny until audible gasps reverberated around the room when I put it on the table.

“A day later, when I picked Camille up preschool, my embarrassment cleared when the teacher told me Camille had a great party and could not stop talking about the pink elephant cake. Ever since,  my focus has been on the intention rather than the execution. This has the added fun of people having to guess what the cake is, not to mention the fact I’m really not interested in being pedantic about its presentation.”

Alison also puts a lot of thought into theming her cakes with something that resonates for the birthday boy or girl.

“I have learnt from my early basic baking mistakes, sticking to packet mix cakes and outsourcing decoration to my seven-year-old twins. I consider myself to be the creative director and try to steer clear of the icing as much as possible.”

(She does admit her efforts have made one of her daughters cry two years running when she’s seen her birthday cake.)

So it was only natural that Alison would become the drinks association’s official staff birthday cake creator. Her first effort was to celebrate member liaison officer Kathy Sloan and general manager Hope McMurdy’s joint birthdays last November. Kathy and Hope had just been to the Melbourne Cup, so Alison whipped up a “birdcage” themed cake.

Since then, birthdays are always eagerly anticipated in the office because they will involve another of Alison’s unique creations.

Earlier this week she even came into the office specially on a working-from-home day so she could present staffer Noxi with her birthday cake. I had NO idea what the cake was supposed to be, but my boss Hope got it straight away … 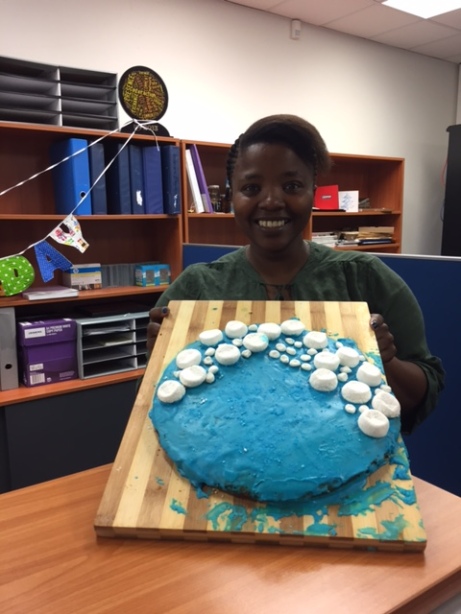 I thought it was a character from Avatar with bubonic plague. I was SO wrong.

Anyways, I thought you might enjoy a guessing game with some of Alison’s creations. Here’s a gallery, the answers are after the song of the day.

Song of the day: Stephen Tin Tin Duffy “The Icing on the Cake”

And the cakes are … 1. The infamous elephant. 2. Pot of moisturiser. 3. Rice paper roll. 4. Bubble bath. 5. Salsa and corn chips. 6. Chicken tikka masala (“No one wanted to eat that cake. I think they thought there might have been some sort of curry flavour involved.”). 7. Birdcage. 8. Hairbrush. 9. Slingshot. 10. Sink filled with dishwashing liquid bubbles (Noxi is very strict about dishes being rinsed before they go in the office dishwasher).

2 thoughts on “People are so freaking funny”