The youngest was in the mood to whip up some food yesterday, specifically meatballs and raspberry mousse.

Who was I to argue?

We amble along quite well together in the kitchen, though she reckons she’s going it alone next week: chocolate and salted caramel cups and something savoury, she just needs to consult the cookbooks again and decide on a dish.

I’m supposed to butt out – other than doing the required grocery shopping – and relax while she does it all. She’s quite the force of nature.

After our yummy dinner, I subjected the kids to Flash Gordon, that campy ’80s cult classic. I can remember swooning over Timothy Dalton in his fetching green costume waaaaaay back when it first came out … I’ve really been the Sam Jones quarterbacky type.

Have you seen the movie? Oh lordy it’s bad. So bad it’s good. Especially the cracking Queen soundtrack. “Flash! Ahhhhh ahhhhh! He’ll save every one of us!”

Scott Pilgrim vs the World director Edgar Wright used the Flash Gordon as one of the visual influences for that cult film. He told Ain’t It Cool News: “Dino De Laurentiis’s 1980 version of ‘Flash Gordon’ is an absolute blast and far better than its camp classic status would suggest. Great performances throughout, from Timothy Dalton’s mighty moustache to Ornelia Muti’s scorching extinction level event sexuality. There’s so much to enjoy here, with Lorenzo Semple Junior’s hilarious and quotable script recalling his glory days writing the Batman TV series. Oh and the score? Only the best sci-fi score of all time. It’s by Queen. You may have heard of them. Add to this an earlier Dino classic, ‘Danger Diabolik’, a pop art explosion of 60’s style. This Italian comic book adaptation has been celebrated by the Beastie Boys in their ‘Bodymovin’ video and in Roman Coppola’s film ‘CQ’, but it again needs saving from its status as a so-bad-it’s-good curio, thanks to the snarky efforts of the MST3’K. ‘Diabolik’ is one of the coolest comic book films out there and an intentionally funny one to boot. Check out the cars, the fashions, the in camera effects and one of Morricone’s sexiest scores. A perfect double of glorious costumes, crazy matte paintings and some of the coolest set designs. A feast for your tired eyeballs.”

The movie made me laugh and laugh. The eldest was very polite about it, trying to hush the youngest every time she announced “That looks SOOOOOO FAKE!”

I’m not sure it was their idea of a good time. Lucky the food was awesome … actually, those meatballs were freaking amazing. Two thumbs up to my little chef.

Here are the recipes … The meatball pic looks funny because I took it while the meatballs were simmering, so it’s steamy. 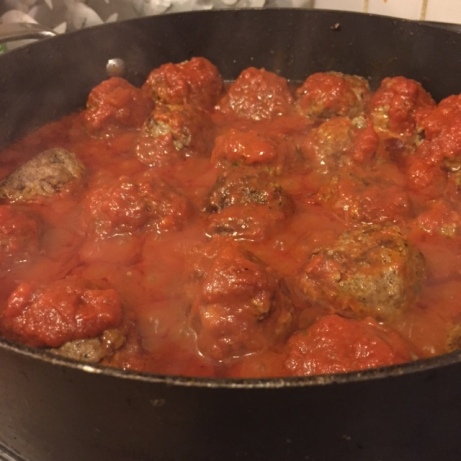 METHOD: Blitz the bread, egg, herbs, parmesan, garlic and a slug of olive oil in a food processor. Mix with the mince. Form into meatballs. Refrigerate for an hour. Saute in olive oil until browned. Drain off excess oil, add the two jars of Jamie Oliver pasta sauce. Simmer 10 minutes, serve with spaghetti and extra parmesan.

We used frozen raspberries, sparingly, as they are sooooo expensive. But the flavour was still pretty transcendental. The recipe I based it on suggested decorating the top of the mousse with three cups of fresh raspberries … there goes the college fund …

METHOD: Blitz the Tiny Teddies in a food processor, mix with melted butter. Spray a baking dish with cooking spray and line with baking paper. Press the mixture into the baking dish. Refrigerate. Place lemon juice in a small bowl and sprinkle with gelatin. Let sit until gelatin softens, 3 minutes. In a blender, puree 2 cups raspberries until smooth, scraping down bowl as needed. Pour through a fine-mesh sieve into a bowl, pressing on solids; discard solids. In a small saucepan, combine raspberry puree and 1/2 cup sugar over medium heat. Cook until bubbles form at edge. Add gelatin mixture and cook, stirring constantly, just until gelatin dissolves, about 1 minute. Transfer mixture to a small bowl and let cool to room temperature, 20 minutes. In a large bowl, using an electric mixer, beat cream and 2 tablespoons sugar on medium-high until firm peaks form, about 4 minutes. With a spatula, gently fold in raspberry puree mixture until combined. Pour over Tiny Teddy base. Smooth top with a spatula and arrange raspberries on top. Refrigerate until set, about 2 hours (we found overnight worked better). Cut into 12 pieces to serve.