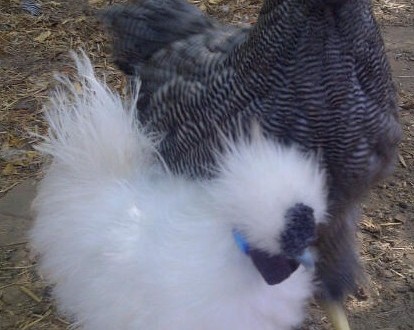 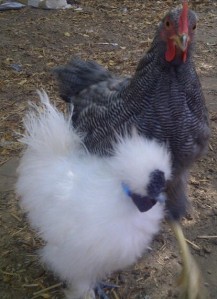 I played chook lotto and I lost. I stuck my hand in a box of fluffy chicks and pulled out two roosters. (Come to think of it, playing rooster roulette might be a more accurate description.) I didn’t know they were roosters at the time. I fed, nurtured and heat-lamped the little guys in my family room for two months, then protected them from our pecking, marauding hens for another two months after that.

One morning I heard a terrifying noise. A sort of of strangled errrooo-errooo noise. I prayed it was a really sick possum. A few weeks later, Husband noted – as he was wrenched from his sleep – that he could hear two distinctly different terrifying noises. One gutteral errrooo-errrooo, one falsetto erroo-erroo-errroooooo. No, I thought, it can’t be, not both of them … Then they shut up for a few days and I vainly hoped we’d imagined it. We hadn’t. For the last fortnight,  Koroco and Fuzzy have been heralding their version of the dawn (sometimes as late as 6.45am, usually around 6.15am on weekends) with cock-a-doodle-doo practice. When I’m not off somewhere jogging and blissfully unaware, I dash outside hissing “shut-up, shut-up, shut-up!”. They ignore me. Well they did until Monday, when they started attacking me instead. I open their cage door and they charge me, beaks snapping at my legs, toes, knees, whatever they can grab. It doesn’t surprise me with Koroco, he’s a wild-eyed bruiser. But Fuzzy is the least macho rooster I’ve ever seen. He’s cute and fluffy – an angora rabbit with a beak. While Googling places to offload roosters, I discovered a description of Fuzzy’s breed – silkies – as the puppies of the chook world. Well Fuzzy’s turned rottweiler, which means it’s not just errrooo-errrooo and eroo-erroo-errrooooo noises keeping Husband awake, he also hears me squealing, “get away from me you feral birds, arrrghhhh, get away!” while dodging frantically around the chook pen.

The chook pen is a metre or two away from our bedroom window. It’s also a metre or two away from the neighbours’ bedroom window. I’m still not sure they’ve forgiven me for losing their mail last time they went on holidays (see https://housegoeshome.com/2012/01/15/i-have-a-terrible-confession-to-make/), so the crowing thing has been raising my heart rate. I sent a craven apology email at 6.25am earlier this week assuring them the offending chooks would be gone by Friday. I got an excited reply that suggested they thought all the chooks were evacuating, so I had to send another, clarifying email to halt the popping of champagne corks.

So, the roosters are heading to a farm on Friday. Fortunately it’s not the happy farmyard in the sky. We’ve found a breeder willing to take them. Bizarrely, people keep suggesting I eat them instead. Aside from the fact Fuzzy would be gone in two bites, I’m not sure I could eat a pet. I mean, the budget’s getting a bit tight and all, but still …

Friends who’ve done the sea change thing had a rooster that turned bad and lost his head as punishment. The husband did the dirty work and hates waste, so he thought he’d better eat him. The rest of the family were horrified. They shunned him while he plucked, basted and baked. As he sat alone in the kitchen, chewing manfully through the tough old bird, he decided he wasn’t really up for eating his pets either.

I’m sad to see Koroco and Fuzzy go, a bit less since they turned feral. Definitely not as heartbroken as when my beloved Snoopy The Rooster (I really don’t have the best of luck with this chook sexing business) made his move to the country. And fortunately I’m not as out-of-pocket. While they’ve eaten their fair share of scratch mix, at least Koroco and Fuzzy haven’t required veterinary attention. Snoopy was attacked by a cat and needed tending and medicating by our local vet. Pricey, but cheaper than when my sister-in-law’s dalmatian puppy savaged her chook. She took the chook to the vet, who assured her he could fix it up, right as rain, for the bargain price of $900. The chook went to the happy farmyard in the sky instead.

Undaunted by my losing streak, I’m determined to play another round of chook lotto. I’ll pull four chicks out of the cardboard box this time to try and turn the odds in my favour. Way more fun than the pokies.