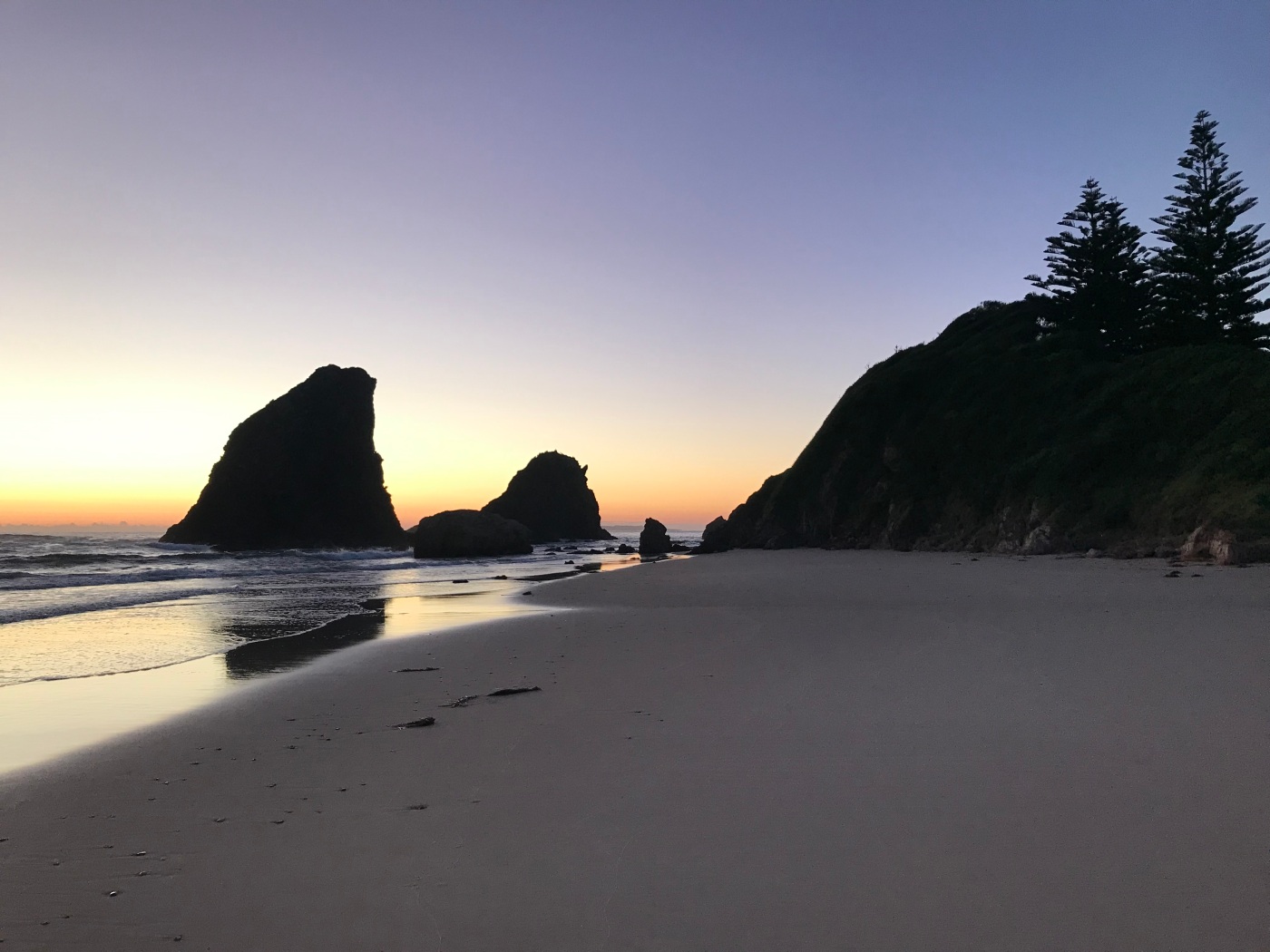 My love of sunrises outweighed my fear of ghosts on our last morning in Narooma.

I’d read that awesome views were to be enjoyed at the Glasshouse Rocks, but the beach was only accessible through a graveyard.

The youngest was disinterested in waking at dawn for an adventure, so I arrived in the darkness alone and started searching around for the white fence that Trip Advisor told me marked the beginning of the track down to the beach.

Couldn’t find it for the bloody life of me, then an older couple appeared … I don’t think they were ghosts … and showed me the way.

I scrambled down the hillside using my phone as a torch and emerged onto the pristine beach, which I had to myself as I strode towards the Glasshouse Rocks.

It was absolutely gorgeous, despite the combination of low clouds on the horizon and no clouds in the sky keeping the sunrise from being a total stunner.

I was entranced as I watched the sun rise between the gigantic rocks. There were two houses perched on the hills behind me and I yearned to own one of them so I could witness the glorious spectacle every day.

A few more people were wandering along the beach with fancy cameras and tripods as I made my way back to the graveyard, then I did a farewell tour around town, concluding with coffee with the seals.

After breakfast we started making our way back up the coast, breaking the journey at Mollymook for the night. We had the swim of the season there. The sky was blue, the sun was shining, the waves were gentle and the water was stunningly clear and turquoise. Perfection!

I reckon Mollymook is a much bigger contender to be the new Noosa than Narooma. Not because it’s prettier, but it’s more accessible to Sydney. Although I was very surprised to find there were only a couple of cafes and a newsagent there. I was expecting lots of ritzy boutiques to match Rick Stein’s fancy Bannisters complex on the hill.

I’d run out of puff – and money – for fine dining, so we had an early dinner at the golf club as we watched the sun set, then we retired to our wifi and mobile-reception free hotel room (what the actual?) to watch Foxtel.

All too soon it was time to head home via Gerringong for brunch. Back to the real world!

Song of the day: KC & The Sunshine Band “Keep it comin love”