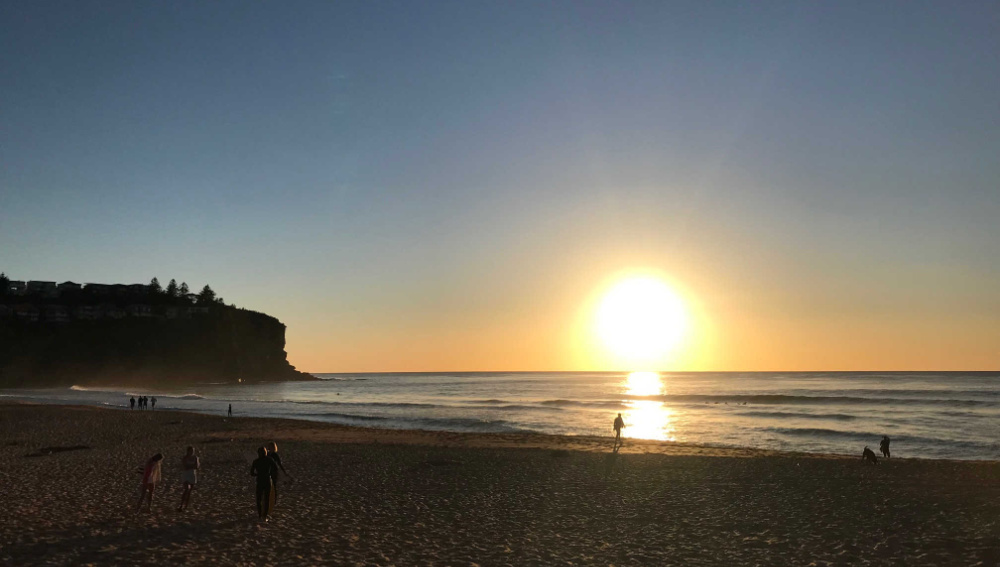 I lost the plot about life in lockdown – and life in general – over the weekend. When I got a little teary on the phone to DD, he suggested I pop up to the Northern Beaches for my first sleepover in FOREVER.

When I texted to say I was on my way, he replied: “Serenity awaits.”

We kicked off my getaway with pink bubbles on the northern hillside of Newport at dusk. Our tipple was France’s highest selling bubbles – Champagne Nicolas Feuillatte. It’s just become more widely available in Australia, so Dan Murphy’s sent me some to try.

It’s DELICIOUS. And the view was pretty amazing too.

Afterwards, we headed back to DD’s place to cook Byron Bay pork sausages, onion gravy and mash for our dinner. Also delicious.

Then DD set the alarm for 5.50am so we could watch the sunrise. He was very not keen when the alarm woke us up. There were no clouds in the sky to amp up the beauty, but sunrises are always stunning things.

DD was my secret JoNathan and took a few photos of me admiring the first rays. The pics are a reminder that you always look better when you sit up straight …

Then it was time to head back to reality … where I thought my phone was broken because I couldn’t post my sunrise Insta photo. After restarting my phone twice and consulting with my best mate Google I discovered – gasp – that Facebook and Instagram were in the middle of an extended global outage that was costing Mark Zuckerberg $160million an hour.

Cut off from social media, I turned to cutting DD’s hair instead, as he needed another lockdown trim. Then I raced home to cook and cook and cook. Fortunately I’d already made a head start on my personal chef duties and cooked double the sausages and mash the night before.

Yesterday I added Mexican taco salad, chicken tagine and creamy pepperoni pasta. Plus I whipped up some two ingredient Raspberry Kisses for dessert – place chocolate baking melts on baking paper on plate or steamer over hot water. When they soften, press a raspberry into each one, then refrigerate until set.

Give them a go – easiest recipe EVER!

Then I ducked up to David Jones to do a click and collect for DD … and it was near an ALDI! I haven’t been to an ALDI since Sydney locked down. I couldn’t resist ducking inside … I left looking like a packhorse with all my finds from the bargain bin, including a set of proper mixing bowls (I’ve been using Christmas-themed plastic salad bowls for years), a fluffy dog bed, cheap diswasher tablets and several varieties of weirdly flavoured potato chips.

Serenity may have slipped away, but its lingering benefits remained. I’m feeling much more zen.

Now, if I could just fix the stuck “B” on my keyboard so I don’t have to lever the button out every five seconds with a debit card … Pity they didn’t have keyboards on special at ALDI.

Song of the day: Any excuse to share this beauty …

One thought on “Serenity awaits”