I was supposed to reprise my Mexican Beef with Cornbread Dumplings for DD last night, but I’ve been feeling a bit/lot overwhelmed over the past few days, so he cooked it for me instead.

To make it extra classy, he prepared and served dinner while wearing a suit.

Both the man and the meal were very delicious. Although, he wanted me to let you know the dumplings take a good 45 minutes to cook if they’re thick. 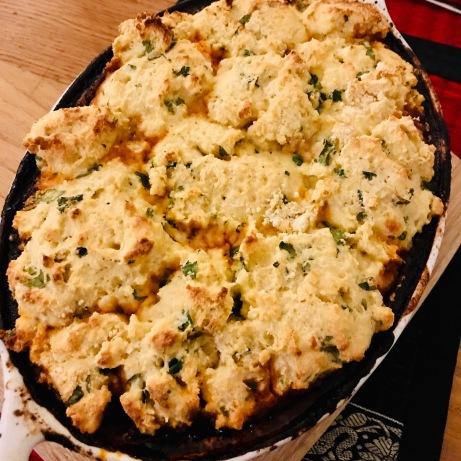 There were a selection of pink wines for me to choose from in the fridge and he’d even created a special YouTube playlist for the evening to cheer me up.

I got very excited when Neil Finn singing Message To My Girl at a Max Session came on because, DD didn’t realize, but I was at the filming. It was the subject of a blog post called Damn You Neil Finn, You Made Me Cry.

If you watch the whole special you might even catch a glimpse of me crying.

As I noted back in 2014: “A wonderful ex-colleague, Lucy Chesterton, who knows my two obsessions are Neil Finn and Doctor Who, sent me a message telling me that a Foxtel Max Session was being filmed for Neil’s new album and did I want to go along? YES. OH YES.”

I even wrote that Message to My Girl was a highlight: “I don’t know whether it’s the divine melodies or the gorgeous lyrics or time travelling to a younger, more carefree me (ah, the  ’80s) … but I blubbed and blubbed and sang and sang and clapped and clapped.

“My 45-year-old heart soared and filled with hope as I listened to that brilliant 55-year-old man sing so passionately about love as his wife of 21 years stood playing the bass guitar behind him.”

Next, we watched Simple Minds performing “All the things she said” live.

And to make it feel even livelier … DD played along on his electric guitar, as he’d been practising riffs during the afternoon.

DD doesn’t play the guitar very often when I’m around, so I was very tickled.

(I’ve posted the official clip though because it’s so gloriously ‘80s.)

And then we watched New Order live singing “True Faith”, because DD remembered how blown away I was by seeing them live in March, days before the world shut down.

It’s a freaking awesome song, and it has a great official film clip, which I got DD to play next so I could revel in the Michelin-like people jumping up and down.

We moved on from there to a few Boom Crash Opera songs so we could relive the fun we had at the Cambridge Hotel with our mate Darren last year, and then at Red Hot Summer in early February (that’s DD at the gig in the main pic).

The videos and the music and DD’s kindness buoyed my spirits.

It was such a lovely night.

Hope there were a few highlights in your weekend too.