I saw eight bands over the weekend.

The musical extravaganza started on Friday night with a trip to Newcastle to see Vince Vega & The Gimps at Lizottes.

It was my first-ever Lizotte’s experience – the venue is owned by Diesel’s brother and is set in the old King’s Theatre in Lambton, which is a gorgeous art deco building.

It’s very atmospheric and intimate, as it only seats 200 people.

Our Newie friends were keen for us to experience Lizotte’s, as they’ve had some awesome nights there. As it happened, Vince & The Gimps were playing the soundtrack of Pulp Fiction on the night we were in town.

And so we found ourselves eating juicy steaks while watching vignettes from Pulp Fiction, including the infamous gimp scene, the accidentally-blowing-the-guys-head-off-in-the-car scene and the overdose scene. A little intense during dinner, but highly memorable.

It was also great to chitter chat prior to the show. We need to visit Newie more often and we’re definitely up for another night at Lizotte’s.

The next morning we ducked to Newcastle Beach for the most glorious dip before making our way to Port Macquarie for Red Hot Summer.

DD chose Port Macquarie because the gig was being held at a park on the waterfront, which he figured might ensure a breeze.

It was blistering in the blazing sun, but we nabbed a spot beside the ambulance tent under a tree, which turned out to be both cool and eye-opening.

Thousands of people sweltering in 35C temperatures for eight hours with a well-stocked bar was not the best combination for some. It was quite the sideshow.

We toasted the afternoon with WIAGs, which we decided was a terrible name – I started brainstorming how The Thirsty Travellers should get into merchandising: Thirsty Travellers is a much better name for little portable glasses of wine with plastic lids, don’t you reckon?

I was also dazzled by the array of humanity that wandered past us. It was a bit like the ‘Fat Babe Pool Party’ episode of Shrill, when the lead finally feels comfortable wearing a swimming costume because she’s surrounded by people who are plus-sized just like her … except with Red Hot Summer it was middle-aged people …

Actually, middle-aged is gilding the lily. Many Red Hot Summer attendees must have been in their 40s when The Angels first got together.

There were lots of walking sticks, a few walkers, lots of limps and the occasional wheelchair. I felt like such a spring chicken. DD said I didn’t sound like one because I kept fretting about all the people wandering around in singlets with no hats. I reckon the boob sunburn would have been EPIC.

I have also never seen so many pluto pups in my life. It seemed like every second person who walked past was clutching one. The pluto pup stall actually sold out around 6pm because demand was so high.

DD and I had quite the heated discussion about pluto pups because he likes them – shudder – and I said they were the most disgusting food on the planet. I added that he might as well like Chiko Rolls and he said he quite fancies those too.

Anyways, check out how sexy I looked in my bucket hat in the “mosh pit” …

As for the music at Red Hot Summer, it was bloody awesome. Aside from Boom Crash Opera coming on 20 minutes early and me missing the first few songs. Waaaaaah! (DD bought me a Boom Crash Opera tea towel from the merchandise van to ease the heartbreak.)

We also saw Killing Heidi (meh), Baby Animals (geez Suzi De Marchi is fabulous), The Living End (meh), The Angels (pretty good) … but my favourites were James Reyne and Hunters & Collectors. The sun had gone down, so I went up to the “mosh pit” for them.

I’ve never thought of myself as a Reyne fan before, but I went nuts when he started singing Boys Light Up. And Hunters & Collectors were so good I cried.

They kicked off their set with “Talking to a Stranger” and suddenly I was in my early 20s with the old gang – Michael, Darren, John, Robert, Tracy etc – at the Palais. (Was that where we saw them? Or was it Newcastle Workers Club?) It blew me away to feel so swept back in time and I started blubbing with joy.

I also loved that they had a three-person brass section. It was fabulous.

Brendan Gallagher sings about how thrilled he is to hear strings and I feel the same way when I hear brass in rock music. Fantastic.

The Hunters finished their set with “Throw Your Arms Around Me” and I was in total heaven from start to finish.

I’m also dazzled that James Reyne and Mark Seymour are both 63. They make 63 look mighty fine.

I felt 63 by the time we got back to our hotel. Knackered. 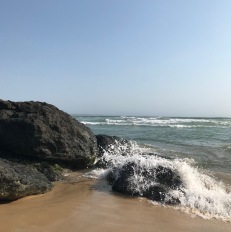 The next morning we grabbed a swim at Town Beach in Port, before heading to Forster for another quick dip and mixed seafood with a view.

Then it was time for long haul home to pick the youngest up from skipping training and do the grocery shopping at Woolies.

How was your weekend? Hope you got some decent rain.

Song of the day: Hunters & Collectors “Talking to a stranger”