I was sooooo excited when my boxed set of the original Planet of the Apes arrived in the letterbox last week.

As a kid, I was obsessed with the Planet of the Apes movies and TV series. I particularly adored Roddy McDowell, who played Cornelius in the first film and Galen in the subsequent TV series.

I didn’t realise back then that Planet of the Apes was actually released the year I was born, 1968. So it joined me in the 50 club last year!

Here are some of the cast at the 30th reunion: 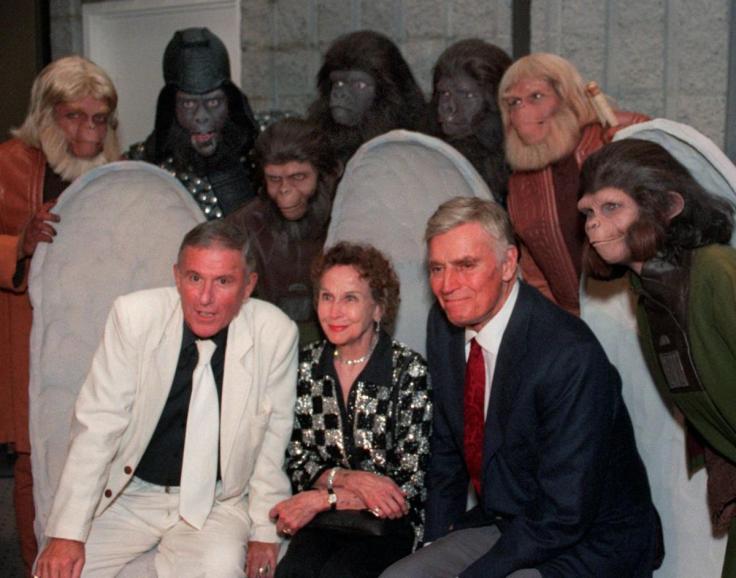 The youngest refused to watch the movie with me, but the eldest was game.

The eldest’s verdict on the film was that it wasn’t too bad, but I don’t think it was love at first sight.

I adored it all over again.

It was quite fascinating to watch the original film again as an adult – it was the product of its time in many good and bad ways.

Planet of the Apes tells the story of American astronauts who crash land on a planet and discover it is populated by mute, animal-skin clad humans who are ruled by intelligent apes.

The film stars Charleton Heston, who was also the lead in one of my other fave sci-fi movies from that era, Soylent Green. Both are pretty radical movies for their time, with strong environmental and anti-war themes, which is a little ironic considering Heston was a five-term president of the National Rifle Association.

Prior to Planet of the Apes, Heston had not starred in a hit film for a number of years, which might explain why he agreed to appear naked and wear a dog collar and leash.

I hadn’t expected to see so much overt nudity in a blockbuster 60s movie.

I also thought it was revolutionary that the astronauts included a woman, who died in space when her capsule malfunctioned, and an African-American man.

Although, it was a bit predictable that the woman died first, followed quickly after by the African-American … the cynic in me wonders if it was because both were regarded as being more expendable than the white blokes.

I was also quite shocked when Heston uttered this line about the female astronaut: “Did I tell you about Stewart? Now there was a lovely girl. The most precious cargo we’d brought along, she was… to be the new Eve. With our hot and eager help, of course. Probably just as well she didn’t make it this far.”

I’ve since discovered that, while Heston didn’t write that creepy line, he was outraged that the media and academia were advocating for affirmative action in the workplace, which he saw as unfair reverse discrimination.

On the other hand, Heston was pretty awesome on racism.

He reportedly joined a picket line when a segregated Oklahoma movie theater showed his movie El Cid in 1961, and also actively picketed segregated restaurants. And, during the March on Washington for Jobs and Freedom in Washington in 1963, he accompanied Martin Luther King, Jr.

However, he also later resigned in protest from Actors Equity because he felt the union’s refusal to allow a white actor to play a Eurasian role in Miss Saigon was “obscenely racist”

Planet of the Apes is the product of a fascinating time in history – it was released the same year as Martin Luther King Jr’s assassination and the heightened warfare in Vietnam, plus it contains overt snipes at racism, xenophobia, nuclear testing and religion.

Even the make-up was remarkable for its time. John Chambers, a prosthetics veteran who had sculpted medical appliances for returning World War II veterans, was responsible for transforming 200 actors into apes.

Later, he explained how, in anticipation of the difficulties in transforming actors into apes, an interesting production decision was made.

“We cast actors with brown eyes to give them a similar look to actual chimpanzees and gorillas,” he said. “We also sought actors with flat noses to fit into the muzzle of the ape appliances. Some were picked at random and their noses were too large. We found that we needed physical actors, and they were usually among ethnic groups.”

Although no formal Academy Awards category existed for make-up in 1968, Chambers received an honorary Oscar for Planet of the Apes, one of only two in history issued for make-up – the other going to William Tuttle for 7 Faces of Dr Lao.

The masks Chambers created were so effective that the actors wearing them were able to give some of the best performances in the film.

As the eldest noted, the apes’ mouths appeared to move more freely than Charleton’s, who tended to deliver his lines through clenched teeth.

I thought this “see no evil, hear no evil, speak no evil” scene was quite fun …

The film also has a fab avant-garde score from Jerry Goldsmith, plus iconic lines such as: “Take your stinking paws off me, you damned dirty ape!” and “You Maniacs! You blew it up! Damn you! God damn you all to hell!”

And that iconic ending … wow, still so powerful.

I wonder if I can talk the eldest into watching the following four movie installments with me, though famous TV critic Roger Ebert noted of the last, Battle for the Planet of the Apes: “[Battle is] the last gasp of a dying series, a movie made simply to wring the dollars out of any remaining ape fans.”

Did you have a favourite movie as a kid?

Song of the day: Starstruck “Monkey in me”

2 thoughts on “The naked truth”