I’d forgotten how much mammograms hurt. You may remember I discovered two lumps in my right boob recently, actually I might not have specified which one.

Then the operator does the other boob. And then she tells you she has to do the side angles, “which will hurt a little more”.

How could it possibly hurt a little more?

I swear, if they were using metal vices to test penises for cancer they’d have come up with a MUCH better system by now.

That was on Friday morning. But the angst wasn’t over for my right boob. I went to the beach on Monday morning with DD, his mate and his cousin Denise. After my swim I pulled my rashie off while chatting to his mate and didn’t realise that I’d dislodged my boob from my swimsuit at the same time.

And so I stood there chatting to DD’s mate with my right tit flapping in the breeze.

DD and Denise came up and goggled and informed me that my boob was on full display. I am presuming DD’s mate had noticed, but had no idea how to politely break it to me.

Mortifying … especially since I’ve spent most of the summer grumbling about everyone having their butt cheeks on display at the beach … and then I put a whole boob out there for public viewing.

Oh! I forgot to tell you the mammogram results.

Both boobs have “scattered benign calcifications” – the largest one is 13mm – but “no suspicious lesion, architectural distortion or microcalcification”.

I was a little worried because there was an awful lot of to-ing and fro-ing by the radiologist during the ultrasound. She even got a ruler out at one point. I was packing it a bit. I may have cried on my way home from the hospital.

I got the results at lunchtime yesterday and headed home to work from my airless back room for the rest of the day.

Meanwhile, Denise accidentally left her passport at DD’s place. He’d flown to Adelaide for work and she’d flown to Queensland for pleasure, but she needed to fly back to Hong Kong via Brisbane in a few days time.

So I offered to duck up to the Northern Beaches after work to retrieve it for express posting.

The youngest came along on the promise of a surf.

We squeezed in a few minutes in the glorious water before the lifesavers went off duty, which was fine with me because while I lost my lump angst in the doctor’s surgery, I gained antibiotic drops for an ear infection. Ducking under waves was too ouchy.

So I took a few photos instead, which completely perturbed the youngest, who couldn’t see the point in snapping cracks in the rocks when I could be snapping her exposed butt cheeks as she glamorously rinsed herself off in the outdoor shower.

I call this series “Lost Passport”: 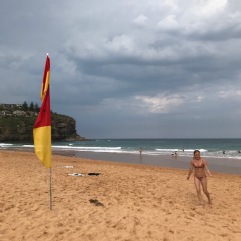 Song of the day: Eurogliders “Heaven”

2 thoughts on “Making a right tit of myself”