My daughter was supposed to be coming home from a family holiday today, but it’s too dangerous.

She’s staying at her paternal grandparents’ house in Albury with her dad. He thought he’d attempt to drive back this morning, but changed his mind yesterday afternoon.

When you see the bushfire map of NSW it’s not hard to see why. I feel much better knowing they are staying put, despite how much I’d like her back with me.

Like many Australians, I feel deeply disappointed by the lack of leadership the government has shown during this unprecedented disaster and the lack of empathy exhibited by our Prime Minister (despite all that expensive training).

He had this to say about the bushfires while hosting a cricket event at Kirribilli House: “Whether they’re started by lightning storms or whatever the cause may be, our firefighters and all of those have come behind them to support them, whether they’re volunteering on the front line or behind the scenes in a great volunteer effort, it is something that will happen against the backdrop of this test match.

“But at the same time Australians will be gathered whether it’s at the SCG (Sydney Cricket Ground) or around television sets all around the country and they’ll be inspired by the great feats of our cricketers from both sides of the Tasman and I think they’ll be encouraged by the spirit shown by Australians and the way that people have gone about remembering the terrible things that other Australians are dealing with at the moment.”

We know what the cause is and we don’t feel better about it because it’s happening against a backdrop of the cricket!

And I remembered Bob Hawke’s heartfelt response to the Tiananmen Square massacre.

Six days after the horrors took place, he cried on national television as he described the terrible events. And he took action – spontaneously announcing that thousands of Chinese students in Australia would have their visas extended so they would be safe.

I won’t include a video of the speech here, because it is pretty harrowing viewing. But you can find it on YouTube if you haven’t seen it.

Our burning nation wants action, not platitudes. It needs a leader prepared to show genuine emotion and decisiveness.

There were a few faint spatters of rain last night at my place. It was like the sky had forgotten how to rain properly.

Then I woke to the sound of a decent shower during the night and my heart swelled with hope that other bushfire affected regions were getting some too.

I can’t believe the smoke has even reached the shores of New Zealand and caramelised the snowy peaks. Awful.

The youngest might not get home until some time next week. I miss her.

I felt very lucky to be able to take my mind off it all – unlike many frightened Aussies – yesterday afternoon by going on a date with DD. We went to the movies to see Knives Out, which was way better than the DVD I watched with the eldest the night before, Ad Astra. Brad Pitt really should have engaged someone who knew something about space physics before producing that one. Totally whacked.

Knives Out had a fabulous cast and lots of twists and turns.

Afterwards I got a chance to try the cocktail that’s predicted to make a revival this year: the Paloma. It’s a mix of tequila, grapefruit, lime and soda. I wrote about it earlier this week for Drinks Trade – even though I’m on holidays I can’t seem to drag myself away from the news.

My Paloma was quite yummy, especially when teamed with some fried squid. 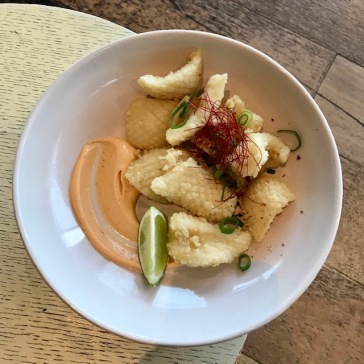 DD and I don’t go out on dates too often, we usually prefer a swim at the beach and a glass of wine on his deck, so it was a bit of a novelty.

And I was about to say that it was a lovely end to the weekend, but then I remembered the weekend hasn’t started yet. It’s only Friday!

Ah, those muddled up days over Christmas and New Year.

It’s back to the real world on Monday.

I hope your weekend is fire free. And thank god for the brave firies if it’s not.