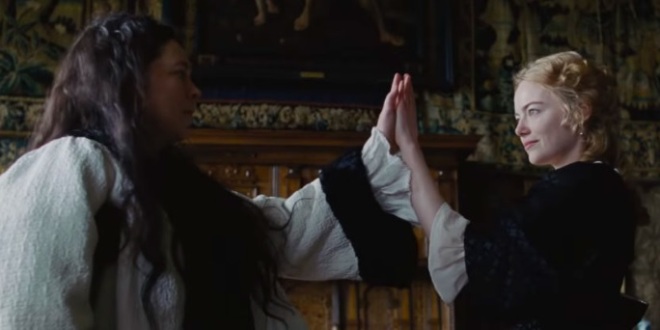 I saw The Favourite last night. I’d been dead keen to watch it since the previews first popped up in my Instagram feed.

I wasn’t entirely sure of the film’s finer details, but the review headlines seemed good.

The Independent said it was “a delightful film, funny, absurd, anarchic and profound.”

News.com.au raved that “The Favourite is wickedly witty and a raucous good time” adding “it is, quite simply, an utter and hilarious delight.”

And then Olivia Coleman won a Golden Globe for her portrayal of the central character of Queen Anne, giving an awesome acceptance speech where she said:

“I would like to tell you how much working on this film meant to me but I can’t remember because I’m too excited.

“I went on a private jet and I ate constantly through the film and it was brilliant and I promise I will keep on enjoying this, because it’s amazing.”

So I thought it would make a great nigh out for my sister, me and my 12-year-old.

That turned out to be a not-Mother-of-the-Year decision. I’ve belatedly discovered it’s rated MA15+ … for numerous very good reasons.

As JCK notes: “Pearl jewelry is used as abundantly on set as is the C-word throughout the script.”

Meanwhile The Sun revealed: “[Queen Anne] was said to be Britain’s only bisexual monarch.”

At one point during The Favourite, Queen Anne says of her maid Abigail “I like it when she puts her tongue in me.”

The movie also included lots of rutting in forests and bordellos and a rather startling hand job scene.

My sister and I didn’t know where to look, except at each other in horror and then back at the wide-eyed 12-year-old sitting beside us.

I apologised profusely to both my sister and the 12-year-old as we left. We all agreed it was an unusual film. There were lots of things I quite liked about it and the acting was pretty amazing, but it was pretty squirm-inducing viewing with a not-yet-teenager.

Perhaps we should have gone with the youngest’s choice: Wreck It Ralph 2.

My sister wondered how much of the film was actually true. So I did some belated Googling.

According to The Sun:

Historical sources show Anne first got to know Sarah when she was only ten years old and third in line for the throne behind her older sister Mary.

During her teenage years the princess sent passionate letters to her friend, who was five years older than her.

Anne wrote how she wanted “one dear embrace which I long for more than I can express” and that she was at Sarah’s “command”.

Some hostorians contend this is proof they were getting it on, however others are convinced Queen Anne would not have indulged in lesbian sex because she was “very ­moralistic” and a devout Christian who prayed several times a day and once objected to the amount of shoulder showing in her portrait on a coin.

Speaking of morals … the one to the story is: do your research before planning family movie outings.

Song of the day: Carole King “I feel the earth move”