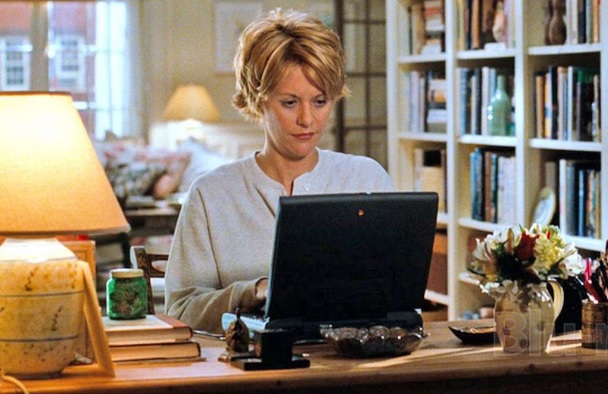 I can’t help myself – every time I see that yellow and black facade I slip inside to search for bargains.

People look at me slightly askance when I tell them about my addiction. “What about Netflix?” they ask.

No idea, no interest, wouldn’t know where to start. The kids have it, but I’m an old-fashioned girl. I like tangible stuff.

My latest purchases: Sleepless in Seattle, an Arnold Schwarzenegger 5-disc set that includes True Lies and Predator, You’ve Got Mail and A Knight’s Tale.

(Oh, plus the original Planet of the Apes series is coming in the post from DVDLand because for some whacked reason JB Hi-Fi doesn’t stock that or Can’t Stop the Music or About Last Night. What the?)

None of my choices were particularly well received by my children, but I fancied watching You’ve Got Mail last night.

The eldest indicated they would rather endure Chinese water torture than sit through a romantic comedy, so it was just the youngest and I snuggled up in front of the fan.

You’ve Got Mail – which co-incidentally turned 20 last month – was pretty fabulous. I liked it almost as much as When Harry Met Sally.

It also filled me with nostalgia for the 10 months that I lived on the Upper West Side.

Every Monday, the kids and I would catch the bus to the Museum of Natural History, which ran a weekly preschoolers class. It taught the kids about something in the museum, then took them to check it out.

Afterwards, we’d swing by the Gum Gum Easter Island statue from Night At The Museum, then wander a few blocks up the road to a place called Pinch & S’mac for lunch. Pinch stood for pizza by the inch, while the S’mac was in honour of the owner Sarita’s macaroni cheese.

Then I’d push the youngest’s stroller a few extra blocks to a little toy shore, where the kids would spend a delighted half hour before we caught another bus home.

Meg Ryan’s magical Bookshop Around The Corner in You’ve Got Mail reminds me of the toy store.

The movie is also set in that quaint time when you had to dial up the internet. The noise it makes in the movie is such a giddy blast from the past.

Back then, it was considered rather novel that Meg Ryan and Tom Hanks’ characters met online and fell in love via email.

That was a giddy blast for me too, because it reminded me of how DD and I fell in love via text message.

Well, he would argue we fell in like, but there was an awful lot of dopamine involved and we were both pretty high on it.

I suppose it depends on what your definition of being “in love” is.

Since DD is a scientist, I went to Live Science for the answer, via a fairly unsatisfactory article you shouldn’t bother reading called “13 Scientifically Proven Signs You’re In Love”.

The signs, unsurprisingly, mostly involve high levels of dopamine. And stuff like “People who are in love report that they spend, on average, more than 85% of their waking hours musing over their ‘love object'”. Check. Well at least during those first few weeks, I’m probably down to about 65% now.

The article concludes with this cheery statement: “Unfortunately, being in love usually doesn’t last forever. It’s an impermanent state that either evolves into a long-term, codependent relationship that psychologists call “attachment,” or it dissipates, and the relationship dissolves. If there are physical or social barriers inhibiting partners from seeing one another regularly — for example, if the relationship is long-distance — then the ‘in love’ phase generally lasts longer than it would otherwise.”

Does 26km classify as long distance?

It must because the “in love” phase seems to be hanging in there for me.