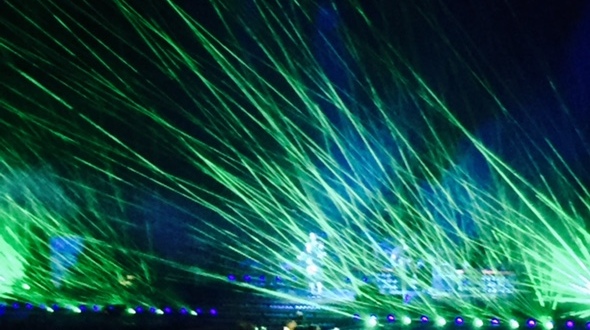 I didn’t feel like trekking across Sydney to see Robbie Williams in concert at the Qudos Arena. I was tired and frazzled and out of sorts. The kids’ hectic new school schedules have been a bit of a jolt.

I was even less keen when I got stuck in a traffic jam and it took more than 90 minutes to get there. The Sid Fogg’s coach from Newie would have been quicker!

But the tickets were a Christmas gift my sister and I gave each other, plus I love Robbie and the seats were great … so I couldn’t be too poor me about it.

Mind you, as I sat down and contemplated how far our great seats were from the stage, I wondered WHY we people pay $200 to see live music in huge stadiums. (It’s been a long time between big gigs.)

But then Robbie came on stage and totally blew me away.

He is AMAZING. I remember seeing him perform in Singapore about 15 years ago and thinking he was fabulous, but he’s taken it to a whole new level since then.

It was a night filled with joy, tears and laughter.

Robbie’s voice was fabulous and he’s the most incredible showman.

Warning: I’m about to discuss the show and it includes spoilers and rude bits.

The night kicked off with an anthem dedicated to Robbie, along the lines of “God Save The King”, which somehow managed to be self-indulgent without being distasteful.

It included lines such as “God Bless Our Robbie …. He is So Well Hung!”

Speaking of which, he introduced himself soon afterwards by saying: ‘I’m Robbie F@#king Williams, this is my band, and this is my cock!”

And then he flashed his tiger-printed undies under his kilt. My sister was super quick and managed to snap a shot!

The bit that got me weeping was when he revealed he’d written a song called “I Love My Life” for his children because that’s what he wants them to say to him one day.

I know it sounds goopy, but I cried the whole way through, thinking “Yes! That’s how I want my kids to feel!”

The second bit that got me going was when Robbie dedicated “She’s The One” to a woman a little older than me called Sue, who was wearing a T-shirt announcing that it was her 45th Robbie concert. She was beyond moved by the gesture and so was I. I reckon it probably rated as one of the best nights of her life.

That’s the thing I liked most about the concert: Robbie’s generosity of spirit. He was there – as one of his most famous songs announces – to entertain you. And he gave it everything.

Another fab bit was when his dad came out on stage and they sang Sweet Caroline together. His dad is a REALLY good singer.

The show was a crazy mix of Robbie’s biggest hits and retro covers. During the encore, he cheerfully sang Men At Work’s “Down Under” and Frank Sinatra’s “My Way” – great fun.

I had a totally brilliant night – it was so uplifting for the soul.

It might just be the best gig I’ve ever seen.

And to top it all off, I got a message during the concert to say one of my dear friends had popped into the registry office to marry his partner – now that it’s finally legal – on the anniversary of the day they met 21 years ago.

So I actually cried three times during the night.

Here are some of my – and my sister’s – happy snaps: 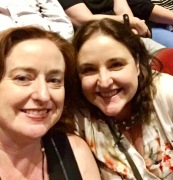 My sis and I pre-Robbie.

The intro to his show. 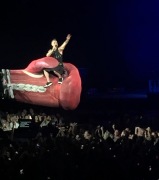 Singing “I love my life” 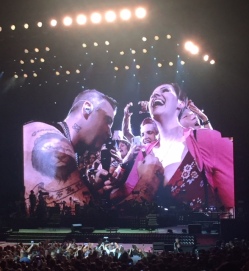 Signing a woman’s boobs per her request. 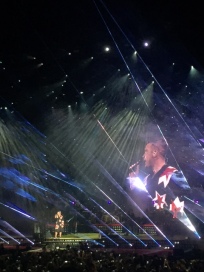 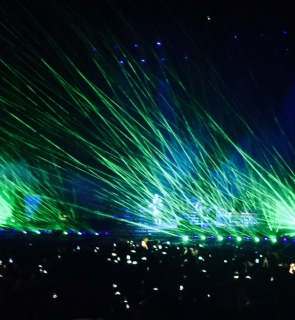 Great lighting at the show. 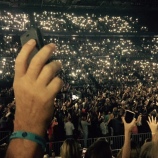 Everyone waved their phone lights at the end, which looked amazing. 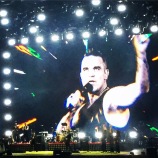 3 thoughts on “I underestimated him”