I’ve made an unofficial resolution to try and look forward instead of back. There’s not much to be gained by wallowing in regret.

But I was a bit stuck for something to write about today. My throat and head are still hurting and it’s stifling creative thought.

Then Facebook offered up one of it’s “memories”. It was a blog post from this time two years ago that included this little vignette:

I was lying in bed on Sunday night feeling my sore tummy when I discovered a whopping big mass under my caesarean scar and promptly decided I was dying.

Cue three days of insomnia before I finally pulled myself together and stopped over-thinking.

I went to my doctor and did my usual “I’m probably being a hypochondriac …” routine. He got me to lie on the examination table, palpitated my lower abdomen and said “Wow! That’s way bigger than I was expecting.”

He pegged my womb at the size of a 16-week pregnancy.

As I exited the surgery, I called DD to share the news that my womb was the size of a 16-week pregnancy.

There was deathly silence on the other end of the phone.

I really shouldn’t terrify a 52-year-old father of four by suggesting baby number five is on the way. 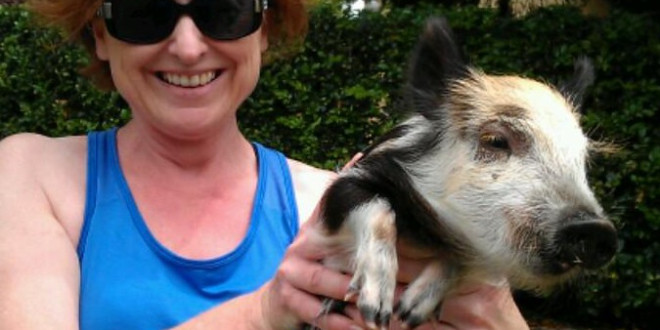 I was walking with my friend Fee when …

I heard the strangest snorting squealing noise and spotted a small furry creature trotting towards us. My first thought was “Wow, that dog has some serious sinus issues …” and then I realised it was a pig.

The pig bolted straight past us. I suspected he was an escapee pet, so I knelt down and started saying something cliched like “Here piggy, piggy!” It worked – he trotted over and let me pat him. I grabbed the fuzzy little porker and he started thrashing and squealing the street down. (I’ve since been told pigs bite … that would NOT have been bulk fun.)

I held onto Mr Piggy tightly … because it was extremely important that Fee capture the bizarre moment on her phone … oh, and because I wanted to reunite him safely with his owner.

Mr Piggy’s ear-splitting squeals alerted the owner to her pet being on the loose. She shot out of her house screaming PUT HIM DOWN!!! PUT HIM DOWN!!!!

So I plonked him on the ground, he hightailed it home and we continued our walk.

I also held a pool party on one of the most searingly hot November days EVER where everything including the sandcastle cake melted.

Back in late November 2013, I resigned from my job at Mamamia. Mia Freedman wrote a press release about it saying:

“It’s with a heavy heart that I wanted to let you know that Alana will be finishing up at iVillage at the end of the year to spend more time with her family. Which, if she were a politician, would be code for “has become embroiled in an unfortunate sex scandal and was photographed leaving a bathhouse’ but in this case is actually true.”

Well, it was kinda true. But that’s one of my “let’s talk about it over a chardy” tales.

Kick back to late November 2012 and it’s another corker: I got sacked for standing up for Kathleen Folbigg in a blog post called Betrayal Hurts and noted:

“I saw the cover of Woman’s Day yesterday and it made me want to cry.

“The story about Kathleen Folbigg made me angry on so many levels, it’s hard to know where to start. The beginning is always a good place.

“Child Killer Outrage – Why She’s So Happy In Jail” is an interview with two former prison inmates, one of whom shared a prison cell with Kathy. The women don’t reveal their real names. The story suggests it’s because they fear repercussions, but it’s actually so readers can’t Google them and discover the crimes they committed against children that landed them in protective custody themselves.  They hide behind pseudonyms and fabricate their tall tales.

“It’s so easy (and cowardly) to be loose with the truth when the person you are slandering can’t defend themselves. Kathy, as a prisoner, has no hope of pressing a libel suit for their allegations, for example that she got a “plum” job as “a reward for informing on other inmates and sleeping with a male prison guard.”

That was a pretty devastating time.

Oh, AND I got bed bugs … at a cabin in the caravan park where DD’s extended family just happen to be staying this year for Christmas. Hopefully they’re all gone now …

We discovered the icky little critters late on our first night there.

Here’s how that panned out:

The next morning, I sidled up to reception with four squashed bed bugs in a coffee cup.

I glanced furtively to my left, right and left again, then whispered: “There’s a problem with our cabin.” I slid the coffee cup across the counter and hissed: “Bed bugs!”

The receptionist stared in the cup and flared her nostrils in carefully contained horror. Or perhaps it was the scent of eau de squashed bed bug, which various websites describe as like “rotten raspberries”.

My heart was pounding wildly during this awkward interchange – I felt like one of those dodgy types who take half a cockroach to restaurants in a ziplock bag and insert it into their meal so they don’t have to pay the bill.

The receptionist – bless her – quietly informed me that she was refunding our first night’s tariff and upgrading us to a villa. I suggested she might need to fumigate  the villa when we left, as the bugs might decide to cabin surf with us.

We drove home yesterday afternoon and deposited our luggage outside the laundry door so we could boil all clothing items and search everything else with a fine-tooth comb. Then we all stripped naked on the back doorstep and shuffled inside for hot showers.

And finally, in late November 2011, I was just really, really depressed. I know this (now) because I wrote a blog post called “Al’s On-Line Therapy Service” that pondered:

Are you happy? Are you unhappy? Are you sure? How can you tell? I think there should be a pill that people take – just once, mid-life – that shows what true happiness feels like. I don’t mean blurry alcohol or drug induced euphoria, with its subsequent hangover and regrets. (I’m giving that one a whirl at a school mums’ dinner tonight.) I’m talking garden-variety, no-frills happiness. It would give people perspective. I reckon most people have forgotten how to recognise happiness/unhappiness. Popping a garden-variety happy pill would give clarity. Depressed people would understand they needed counselling/medication. Non-depressed people would recognise that their life is pretty damn good, all things considered. A few months ago, I described my emotional state to a friend as “approaching contentment, with occasional flashes of joy”. I thought that was as good as it got …

Blardy hell. I’m so, so glad I don’t need a happy pill any more to know if I am or not.

Song of the day: Pharrell Williams “Happy” (sorry I’ve been trying to avoid it for years)

3 thoughts on “The week when crazy stuff happens”