The kids are with their dad for most of this week, going to see Kinky Boots and battling their way out of a panic room, so I decided we should do SOMETHING together before they left.

I’d tried to get seats on a whale watching cruise, but it was booked out. You should have seen the look on the youngest’s face when I told her what I’d been planning, all wrinkled nose and disgust at the idea of going out “on some fishy boat”.

I’d thought her delight at sailing around Capri meant she was up for any ocean-centric stuff. Nup.

Anyways, I came up with a Plan B. It started out well … I took a slow-roasted lamb dish to my sister’s house for dinner, we sat around the table afterwards guessing who was singing popular music on a digital station afterwards (well, everyone else did, I’d had no idea, though I threw a “Lorde” out there at one point and fluked it) and the kids played computer games with their cousin while I soaked in the spa with my sis. Tick!

On Saturday, we headed into the city for yum cha in Chinatown and some liquid nitrogen ice cream for dessert.

The youngest was a bit crook when she woke up … I’m thinking those adenoids really need to come out … but she insisted she’d crack on hardy despite the snot.

Walking down from our $20 parking space in World Square (research this better next time Alana, the $10 deal was for pre-booking) was a grimy, uninspiring experience. Gawd western George Street is uggles.

Yum cha at the Marigold was oh-kay … but  it was over in 10 minutes flat. Gobble, gobble … “Can we go now? I’m booooooored!”

So we went to Paddy’s Market for a wander. Cue more uninspiring grime and tatt – the place was crammed with destined-to-be-landfill crap. I’d offered to buy the kids something there, but they didn’t see a single thing that tempted them (well, the eldest angled for a $20 machete … no way ..: and took a they-must-be-kidding photo of a mobile phone case with a figit spinner attached to it.) 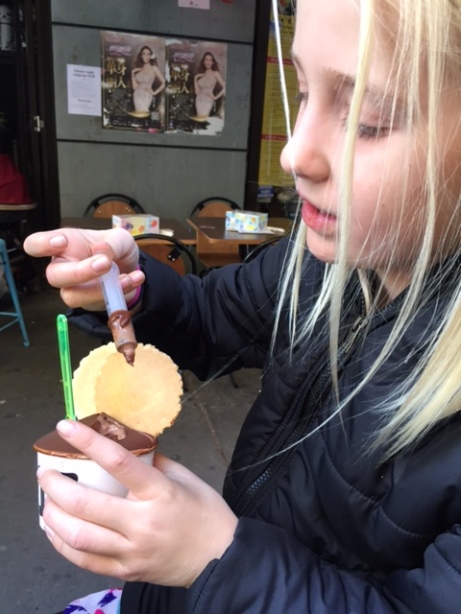 Then we walked through the mall in Chinatown, cue even more uninspiring grime, to an ice-cream place called N2. The gusts of liquid nitogren inspired a few gasps of excitement from the youngest. The girls begged for the large size ice-creams, which were $17 for two (getting a syringe filled with chocolate sauce in your ice cream … priceless) then proceeded to only be able to finish about half because they were so rich. Mum helped out a bit, we threw the rest in the bin.

Only about 90 minutes of my $20 all-day parking had elapsed by that point so I ignore the pleas to go home and dragged the kids to Pitt Street Mall through a bit more uninspiring grim.

The youngest wanted to explore Myer’s kidswear department and proceeded to spend the next hour trying on clothes. I cannot even begin to tell you how much the emo eldest enjoyed sitting on a pink velvet pouf outside that changeroom, surrounded by pastel girly stuff.

There were more pleas to go home after that, but I was within cooee of GAP, so I insisted on popping over there. Blerg. It’s gone off. Sooooo bland and synthetic.

We retraced our steps to World Square, grabbed the fourth and fifth season of X-Files on DVD at JB Hi-fi and headed home – all in agreement we were in no hurry to return to the city any time soon. Not our scene.

Then we lay on the couch watching continuous episodes of the X-Files until 10pm.

It wasn’t my finest day in mothering, but it’s the thought that counts …

The youngest was even peakier on Sunday morning, so we lay around the house a bit more (well, mum did the housework) until their dad came to pick them up at 4.30pm and asked how much saxophone practice the youngest had done for her exams … er, none … and then they were gone.

And I won’t see them again until Thursday night. I miss them. The house is soooooo quiet (aside from the bloody yapping dogs).

But the youngest sends me kiss-blowing emojis and I know they’re loved and well-fed.

And there will be other weekends to do fun stuff together.

I’m already dreaming about taking them to Hawks Nest for my 50th. It’s where I spent most of my childhood holidays, with my nan and pop, and I feel an ache in my heart to go back and explore the rock pools at the base of Yacaaba headland, poking around in the crevices for precious cowrie shells.

I have so many happy memories of that place.

Are there special moments from your childhood you want to share with your kids?

Song of the day: Style Council “You’re the best thing”