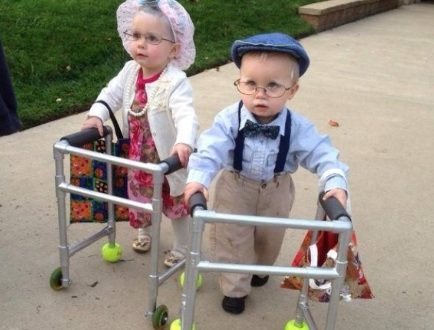 I felt very middle-aged when I woke up at 6am yesterday morning.

Oh, what AM I talking about?

I felt very middle-aged the night before too, recoiling at my wrinkles in the Heroes & Villains party photo booth and wearily suggesting we head home at the ungodly hour of 10.30pm.

But hauling myself out of bed and heading to Silverwater Jail was a particularly I feel soooooo old moment.

I popped a few Nurofen for my Why did I drink six glasses of champers? headache and winced my way to the car on my Why did I wear such high heels and dance around like a loon? aching feet

My old bush turkey injury is giving me a referred niggle down my right leg when I accelerate, so I shifted and grimaced my way across the city.

It didn’t go too well on the cold metal stool in the visitors’ room at the jail either. Lots of shifting and grimacing there too.

Well, not all the grimacing was caused by my leg. You hear some rather harrowing stories during jail visits about life behind bars.

Then I ached my way home again before slouching off to drink lots of caffeine while I grocery shopped.

I ran into my equally exhausted sister at Woolies – she’s currently working six days a week and her Schnauzers ate her Nurofen the other day, so she’s been served with a $2100 vet’s bill – and we had a brief, wan conversation.

I asked if she wanted to go to the gym with me. I thought it might pep us up, but she was too buggered.

I didn’t really feel like it either, but I forced myself to go because blimey my belly is getting big. It’s just not fair that you need less calories as you get older but there’s not less hunger. I’m constantly STARVING.

Oh, what AM I talking about?

I’ve been constantly STARVING my whole life. That less-calories-required thing sucks though. Damn you Mother Nature.

Speaking of starving, I was feeling pretty wiped out post-gym, but when DD texted offering meatballs and a cuddle I was powerless to resist. So I hauled my hungover ass 40 minutes up to Avalon for a quick visit.

After dinner, we ran through our respective aches and pains and he cheerily noted we had sticks and walking frames in our future.

As I left at 9pm he told me to text and let him know I was safe when I got home, but cautioned he might not reply because he could be asleep … it being 9.40pm and all (DD was feeling pretty middle aged yesterday too).

Romance isn’t dead, it’s just needs a Bex and a nice lie down.

Do you make groaning old-person noises when you get out of a chair? I do.

Song of the day: Divinyls “Pleasure and pain”

4 thoughts on “It hurts”