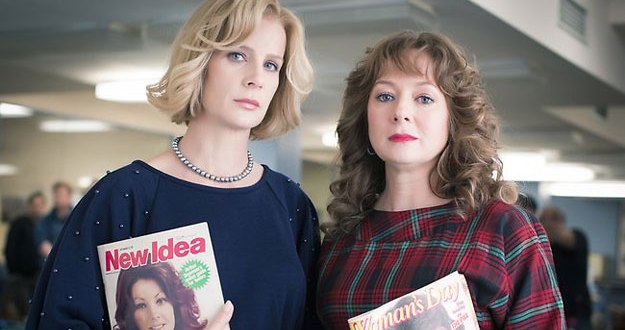 I’ve been a journalist since I was 17, starting out as a cadet at The Newcastle Herald.

Journalism got me out of bed every morning. It kept me awake at night.

I achieved more in media than I ever thought possible. The painfully shy teen would never have believed what lay ahead.

If you want some inkling of what the rollercoaster was like, watch Paper Giants. I cried a lot when Paper Giants 2 screened on ABC-TV three years ago, as the memories of weekly magazines started bubbling back.

I was hesitant – I wanted an editor’s gig. He told me being deputy on Woman’s Day was safer, less scary than being in the direct line of Kerry Packer’s fire. He sent me to meet the editor, Bob Cameron, who freaked me out with his talk of fax machines under the bed for late-night photo bidding.

I like my sleep, I didn’t fancy late-night photo bidding and fax machines under my bed. So I turned him down.

I was also young and foolish and ridiculously snobbish about weekly magazines. If I was going to make the move it would be as editor, nothing less.

I can’t quite believe my arrogance.

A few years later, I was offered the job as editor Woman’s Day. But I’d just moved to Singapore to edit Cleo. So I said no. I’d uprooted my whole life – and my husband’s – and moved to a new country. I couldn’t go back. Not so soon.

About 18 months later, I went to breakfast with the publisher of Woman’s Day the morning after I launched Singapore Harper’s Bazaar. She offered me the job again.

I knew I wouldn’t get another chance. This was my last. So I took it.

My grandmother and mother – both lifelong Woman’s Day fans – were giddy too. Who needs a brain surgeon in the family when you have a Woman’s Day editor? Way more cudos at the nursing home.

Fortunately the fax machine only needed to be in my hallway, not under the bed, by the time I walked through the doors at Woman’s Day.

I knew nothing about weekly magazines when I arrived, but I had the most awesome mentor to teach me – Lorrae Willox.

Lorrae Willox is one of the great, unsung heroes of weekly magazines. And she taught me everything she knew. Bless her. (She still sends my kids birthday presents every year.)

As for editing Woman’s Day … it was exhilarating, it was terrifying, it was gutting.

I loved it. And I hated it.

I was never Nene King. Both in the good and the bad ways. She was a legend who transformed the genre.

I kept my cool, I didn’t fly my flag, I put my head down and got on with the job of arresting the spiralling circulation.

Despite editing the magazine for six years, I won’t be remembered in the annals, but I’m proud of the job I did.

Watching the moment when Nene finally beat New Idea’s circulation figures in Paper Giants was incredibly emotional for me. I felt her joy. I literally fist-pumped the air. Circulation figures have the ability to make your heart soar or crush you to dust when they arrive on a Tuesday morning.

I finally met Nene a few years ago. Lorrae organised a cup of tea.

Nene was lovely to me. Nothing like the horror stories all the old guard told me …

Oooops, I’ve waffled … Nostalgia sent me down a rabbit hole … What I’m trying to say is that I’ve decided it’s time to walk away.

And, like that moment it finally sunk in that I was the editor of Woman’s Day, I can’t quite believe it.

You know how I was doing some work for the drinks association? Well they’ve asked me to go full-time. I’m their communications manager – social media, newsletters, press releases.

I’m incredibly sad to leave journalism, but also relieved. Media is a soul-destroying slog as it reinvents itself in the digital age. Only the warriors survive and thrive.

The team at the drinks association are lovely and the communications role is mine to mould. It’s filled with potential and fun. I’m really excited about the challenges that lie ahead.

If you’re interested in the latest news in the drinks industry, check out Drinks Trade.