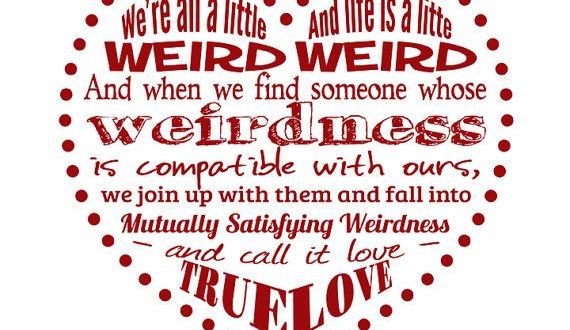 A few years back, the therapist who helped me through my marriage break-up did a “schema” test that revealed I was “normal.”

It was a bit unsettling because I’d spent my whole life convinced I was a weirdo.

Why? Because I don’t notice changes to people’s appearance, I’ve had to train myself to perform social niceties such as hugs and kisses, I never remember to call people to ask how things went or if they’re feeling better, I talk too much and don’t listen enough, and I swing wildly between being incredibly social and wanting to hide.

I also torture myself late endlessly about what a terrible person for not noticing changes to people’s appearance, being crap at hugs and kisses, never remembering to call people to ask how things went or if they’re feeling better, talking too much and not listening enough.

What the hell is a schema test? It was created in the early ’80s by Jeffrey E. Young, PhD, a cognitive psychologist and clinical researcher at Columbia University Medical Center.

He began to spot distinct, recurring patterns in his patients’ psychological profiles – patterns laid down in early childhood that continued to shape their adult thoughts, actions, relationships, careers, and life choices. He called these habits “schemas,” borrowing the ancient Greek word for “form,” and he nicknamed them “lifetraps” to make it easier for people to understand both the concept and the risk of letting their schemas define them.

I filled out a schema booklet prior to my appointment with the therapist, which was aimed at identifying my patterns of thought and behaviour so she could pinpoint my emotional triggers.

After examining my answers, she told me there wasn’t anything weird or flawed about my behaviour. She asked if I expected people to do the same things for me and whether I felt upset if they didn’t. And I was like … well … no. I’m always slightly startled that they do (in a nice way). Not because I don’t think I deserve compliments or attention but because I don’t seek them out.

And she nodded and explained that everyone is wired differently. Just because I’m wired one way doesn’t mean it’s wrong and that the way another person is wired is right.

She added that after spending three angst-ridden hours with me she was certain there was nothing pathologically wrong with me. In fact all my scores for screwed-up schema stuff were really, really low.

I’d spent my whole life internally labelling myself as an oddbod and it turns out I’m completely normal?

I felt quite ordinary afterwards. But also relieved. And released.

As time has passed, my faith in her diagnosis has wobbled. I reckon I AM on the weird spectrum.

Soon after I met DD, I described myself as the “sanest crazy person” he was ever going to meet. (Luckily that didn’t put him off.)

And I think that still stands. Except when I get PMT and start easing off on the sane and amping up the crazy.

Fortunately I’ve reached a point in my life where I KNOW I’m being totally irrational and my head is telling me things that simply aren’t true. Unfortunately, being aware of it and combating it are two very different things.

Rational me has a lot of faith in herself. She’s a good person with a lot to offer.

Irrational me has the opposite opinion.

Do you think that ever changes?

Song of the day: Radiohead “Creep”