From a royal baby christening to a royal pain in the ass getting engaged to Kim Kardashian … it was quite the week in la-la land.

>> Prince George was christened this week. What was your care factor? The photos were very sweet. Click here to check them out.   My favourite parts of the ceremony were the endearingly down-to-earth bits, like that Prince William and Kate invited the midwives from St Mary’s Hospital as a thank you for helping deliver the royal baby.  I also loved that during a private tea at Clarence House afterwards, the guests had “christening cake,” a tier taken from the couple’s wedding cake.

>> They married just two years ago, but Miranda Kerr and Orlando Bloom confirmed in a joint statement on Friday that they quietly parted ways months ago. Their rep said: “In a joint statement, Orlando Bloom and Miranda Kerr have announced that they have been amicably separated for the past few months. After six years together, they have recently decided to formalize their separation. Despite this being the end of their marriage, they love, support and respect each other as both parents of their son and as family.”

>> Tori Spelling may have been born into incredible wealth as the daughter of TV producer Aaron Spelling, but she says she’s fallen on hard times. While publicising her latest memoir, “Spelling It Like It Is”, Tori told People magazine: “I haven’t bought a purse in three years. And it’s fine. I look back on that girl who shopped at Gucci in my 20s, and I can’t even relate.” She adds that her husband Dean McDermott, 46, wants a vasectomy, but they can’t afford the procedure.

>> Kelly Osbourne added a touch of Australia to her Halloween costume this year, donning a spangled dress, feather boa and pink butterfly-shaped glasses in homage to Dame Edna. “I really hope I did @realDameEdna justice! What do you guys think?” the Fashion Police co-host asked on Twitter. 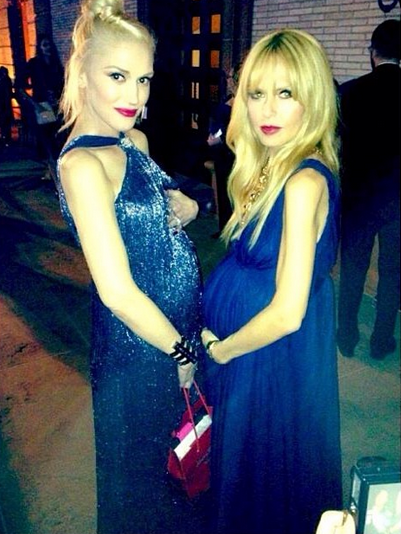 >> Mums-to-be Gwen Stefani and Hollywood stylist Rachel Zoe had a bump-off at the Wallis Annenberg Center for the Performing Arts Inaugural Gala. “Another fun one from moms night out at #wallisannenberg! Isn’t Gwen the most gorgeous? #majormommymoment #latergram,” Rachel tweeted. 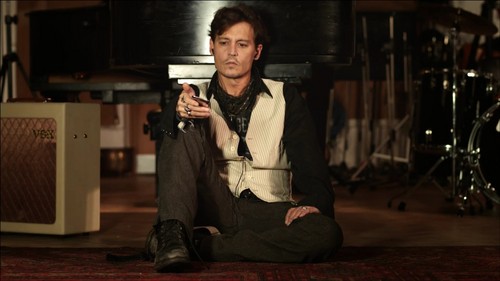 >> Get your tissues out … Tom Hanks has met his biggest fan – an autistic teenager. Watch the heartwarming moment here.

>> Cameron Diaz has sex with a … car … in her latest movie, The Counselor. Check out a bizarre glimpse below …

>> During a Q&A session with TV host Mario Lopez, Katy Perry was asked what she carries in her purse. She answered:  “One of the first times I went to the Grammys, I got to share a dressing room with Miley Cyrus and Taylor Swift, and I asked for a lock of their hair from each one of them, which is totally creepy, but awesome.” To keep things neat, Katy “put little bows on [the locks] individually” before putting them in her purse. “That was my little secret. I’m a freak!” she confessed. (Forgive the gratuitous rabbit shot, I’m a bit bunny obsessed.)

>> Kanye surprised Kim with a marriage proposal at San Francisco’s AT&T Park, which he rented out for the occasion. Baby North West’s mama said “yes,” and is now sporting a 15-carat Lorraine Schwartz diamond ring. Actually, that doesn’t adequately convey how over-the-top this proposal was. Not only did Kanye book the entire stadium, he hired a 50-piece orchestra to serenade Kim with Lana Del Rey’s “Young and Beautiful” and his own collaboration with Keri Hilson, “Knock You Down.” After his message flashed on the stadium screen (“PLEEEASE MARRY MEEE!!!”), fireworks went off. Then, when Kim said yes, her friends and family emerged from their hiding place in the dugouts to congratulate the couple. Total cost, according to Vanity Fair:  $6,245,000. 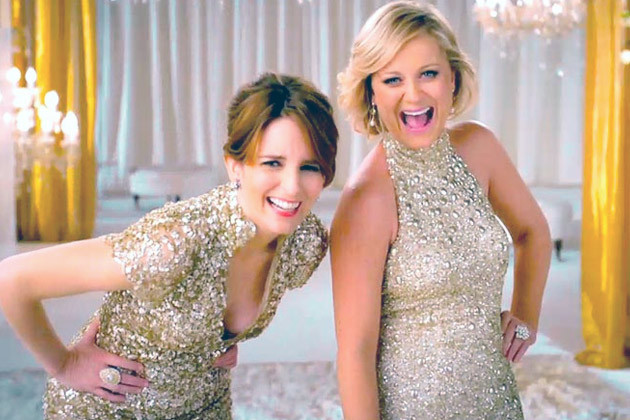 >> On the subject of excess, Radar is reporting that Tina Fey and Amy Poehler will earn $4million each to host the Golden Globes. “Tina and Amy decided to ask for the craziest package ever given to awards hosts,” says a source. “They are each being paid more than any Oscar host in history with the exception of Billy Crystal.” Billy scored almost $5 million to host the 2012 Oscars while the “standard first timer pay for the likes of Anne Hathaway, Hugh Jackman, and Seth MacFarlane is closer to $2 million.” 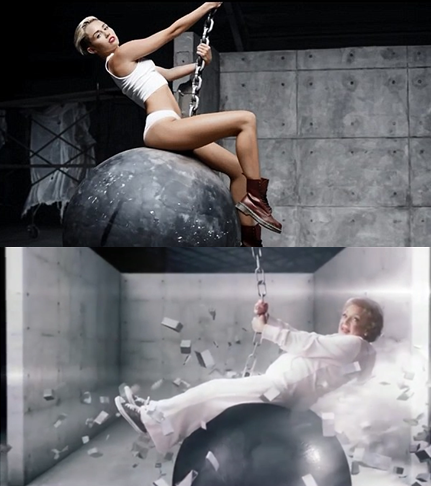 >> Amid the sea of parodies and open letters to Miley Cyrus following the starlet’s recent behaviour has come something truly wonderful: an homage from the legendary Betty White. See it here. 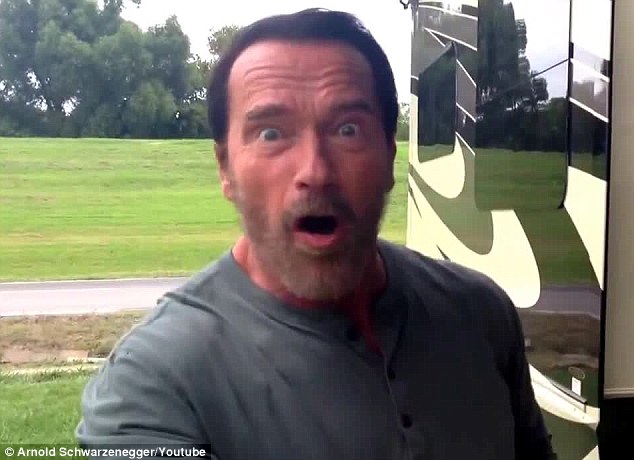 >> Well, this is a little slice of heaven. Arnold Schwarzenegger has taken to Reddit and repeated his fans’ favourite lines from his movies in a hilarious series of videos. See them here. 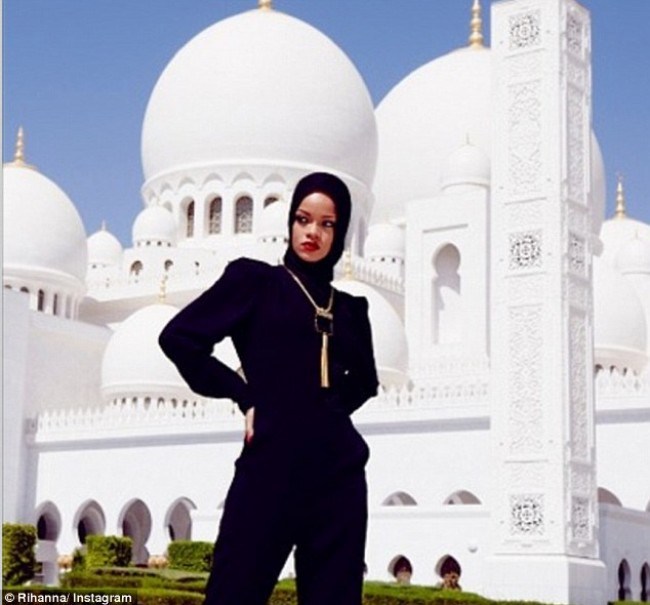 >> Rihanna was asked to leave the grounds of Abu Dhabi’s Grand Mosque after posing for photos in the building’s courtyard. Staff at the compound said her actions violated the “status and sanctity” of the mosque, which is one of the most important cultural and religious icons in the United Arab Emirates. 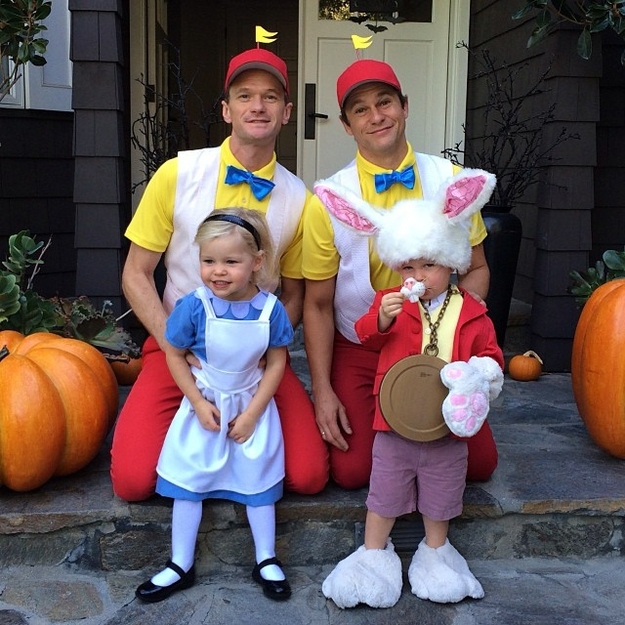 >> Neil Patrick Harris shared a photo on Instagram of his family dressed up as characters from Alice in Wonderland. How adorable do they look? After all, the family that plays dress-ups together, stays together…

>> New York Post’s Page Six has reported that the reason Gwyneth Paltrow is so freaked out about a feature Vanity Fair magazine is writing about her is because the writer is investigating whether she had an affair with Miami billionaire Jeff Soffer. Jeff is the owner of Miami’s Fontainebleau Hotel and Elle Macpherson’s new husband (the couple wed in early August in Fiji after dating on and off since 2009). Numerous strong denials from all parties have since ensued.

>> It was revealed that Kristen Bell and Dax Shepard tied the knot in a secret and spontaneous wedding in Los Angeles. The longtime couple said “I do” in a ceremony at the Beverly Hills County Clerk’s Office. The Veronica Mars actress and the Parenthood star arrived at the office to get a marriage license, but took an employee up on his offer to marry them in the nearby courtroom. 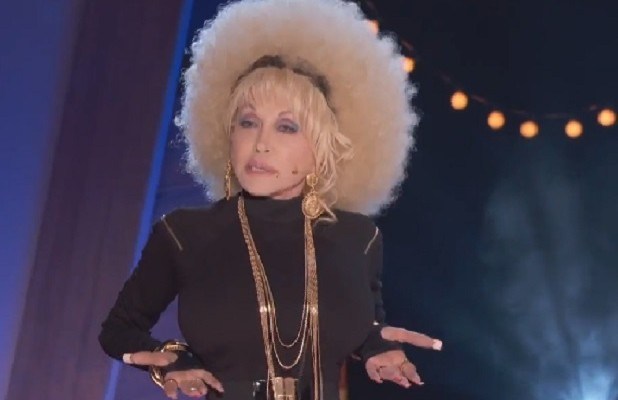 >> Now here’s something you don’t see every day … Dolly Parton rapping on The Queen Latifah Show. Some of her priceless lines included: “Hey Miley, I got your wreckin’ balls right here!” Watch it here.

Need an even bigger gossip fix? Head over to iVillage by clicking here.

One thought on “HouseGoesHollywood: a royal baby is christened and a royal pain gets engaged”