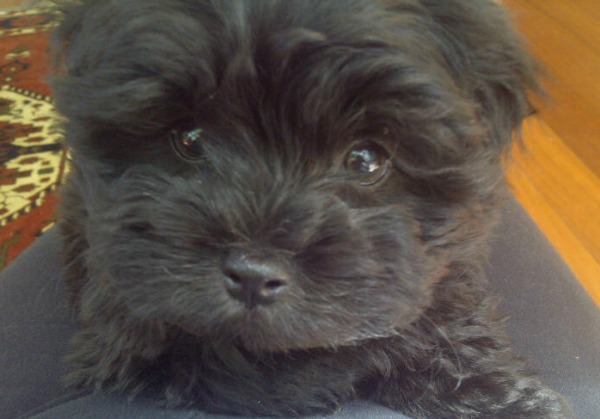 Having a puppy is a lot like having a baby. They demand constant attention, keep you up at night and aren’t toilet trained.

I had flashbacks when I went to the supermarket a few days ago and was forced to explore the baby aisle for the first time in FOREVER. I needed baby wipes for cleaning the dog’s butt when his poo sticks to his bum fluff.

I thought my bum wiping days were over. But no.

Husband is coming around nicely to the dog. He even seemed to like it when I chucked the puppy on his face at 6.50am yesterday morning and he got a thorough licking.

I’d been a bit worried it might lead to divorce, especially since I keep having to interrupt meaningful conversations with him to clean up accidents.

As I pondered in a blog post in 2011 called The Intellectual & The Gossip:

As we drove to lunch yesterday, Husband started talking about the latest book he’s been reading, The Goldilocks Enigma. Apparently it’s about how the universe is infinitely bigger than previously imagined, that there might be lots of other universes and how electrons work and stuff. I said “uh-huh” a lot – in what I hoped was a learned manner – but didn’t understand most of it (ok, all). I tried to retain a few salient points for you, but my brain squeezed them back out again.

When I ponder space, my thoughts usually centre on whether there might be aliens – fingers crossed – and if it would be too scary to be Doctor Who’s assistant in real life.

It’s always been this way.  Husband’s quite the intellectual, I’m not. From the moment I met him, I didn’t understand lots of things he said. I pretended I did, then I’d divert the conversation by making him laugh, thus avoiding a meaningful response. And so the years have passed amiably together. Along the way, he became a serious business journalist, I became a gossip mag editor. He got a Sydney Theatre Company subscription, I joined the Hoyts movie club. He read the broadsheet newspaper, I read the tabloid one.

So what on earth do we find to talk about when we have lunch? After he got all the science stuff off his chest, we moved on to the Sprogs, my plans for the future, his plans for the present, fun things we could do together on weekends, stuff I want to do to the house … As we chatted, I ate a yummy seafood bisque risotto with prawns and ling, while he had a seafood curry and a waffle for dessert (the edible kind).

Afterwards, we squeezed in a short stroll on the beach. The sun was shining. The water was sparkling. As we walked, we fantasised about which beachside apartment we’ll buy when the Sprogs leave home. I was so zen and laid-back when I arrived in the playground for school pick-up. Several other kindy mums commented on it. So I’m thinking I might keep Husband a bit longer. Despite him asking whether I’d read Dante’s Inferno over dinner.

Since I went back to work dating has kind of fallen off the radar, but we’ve decided to cough up for a babysitter every week or two to get things back on track. Tomorrow night we’re off to a Walkley Awards drinks thingy (Husband has one, I’ll NEVER get one, but I do love a free champers) then dinner in the city together.

I’ll try not to talk about the dog too much. But I still haven’t read Dante’s Inferno.