There’s nothing like going to a concert featuring an ’80s pop star who’s morphed into a bespectacled middle-aged folk singer with a slight paunch to make you feel your age.

Some lovely friends of Husband’s took us to the Famous Spiegeltent on Sunday night. The Spiegeltent is this gorgeous wooden tent with stained glass windows that is erected in Hyde Park every January for the Sydney Festival. I’d never been before and I was dying to go. It was lovely, though vaguely startling in the way it shuddered every time the featured musos stamped their feet to the music.

We had no idea who we were seeing at the Spiegeltent until we arrived. Even after looking at the tickets I was none the wiser – two blokes called Norman Blake and Joe Pernice. Norman was in a band called Teenage Fanclub when he was a young whippersnapper. Joe is from a band called The Pernice Brothers. 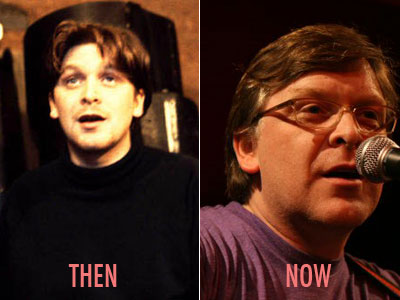 http://www.thefrisky.com features this before and after comparison of Norman

Now, I’ve vaguely heard of Teenage Fanclub, but I’m not the slightest bit familiar with The Pernice Brothers. I asked Husband to remind me what sort of band Teenage Fanclub were and he compared them to The Lemonheads. I’m slightly more familiar with The Lemonheads, so I asked if Evan Dando resembled Norman Blake these days. Husband wasn’t sure. So I Googled him. Evan still looks pretty much like Evan … 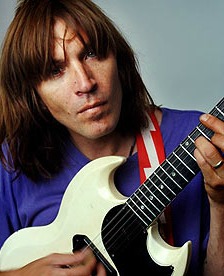 Norman and Joe were actually rather lovely. Gorgeous voices and a nice banter on stage that made you think they’d be fun to talk to at a suburban dinner party.

But they reminded me how tough it must be to age in public. I get to do my ageing in private. Still distressing, but I’m rarely forced to confront my younger self unless I get out the photo albums.

When you’re a celebrity, your younger self constantly comes back to haunt you in the media.

Matt Le Blanc made the point rather confrontingly in his TV series Episodes. Playing a fictionalised version of himself, he sits stuffing his face and drinking himself stupid in one scene, while watching videos of his gorgeous younger self on TV.

I’m not thinking it’s pretty thing for him to face in real life either.

Mind you, I was a bit discombobulated when an old friend from high school materialised in the crowd at the Norman/Joe show. He looked exactly the same as the last time I saw him, years before. We stared at each other for the longest moment before saying hello. All I could think is how startled he must have been by my deterioration into midde age. Back then we looked like this …

Now I have a bit of the Norman about me. And the only way is downhill from there.

While my school friend seems to be channelling Evan’s youth.

Fark I hate getting old.

2 thoughts on “Has been”