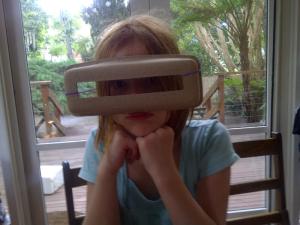 My plans for yesterday got cancelled at the last minute. I should have been relieved, but I panicked. How would I amuse the Sprogs all day? Movies, beach, play centre, IKEA jaunt …? A quiet day at home didn’t make the list. (It’s an illness. I should be medicated.) But the Sprogs rejected The Muppet Movie, the weather looked too inclement for beach-going and the bank balance wouldn’t support another IKEA trip. So home finally got a look in. I decided to (secretly) treat it like an episode of Survivor, with challenges and rewards and stuff. It was a pretty loose concept, as I’ve never actually watched Survivor. But Wikipedia soon got me up to speed. The first challenge? Sprog 1 wanted us to play Polly Pocket together. Now there’s an endurance test worthy of Richard Hatch (it’s the only name I remember from my mag-slag days, does it fit?). And an odd choice for a child who professes to be “one third vampire, one third alien and one third werewolf” because she loves blood (??) and hates garlic (“except on garlic bread”). Like Big Dolly, Polly seems to be enjoying a resurgence in recent weeks. We have a bucket of Polly paraphernalia from our time in New York (I figured it was tiny and portable). There are little clothes, eeny weeny shoes, pets, handbags, hats, food. So Sprog 1 opened a Polly Pocket homewares store, Sprog 2 manned a Polly Pocket shoe store, and I was in charge of pets and groceries. I’m pretty good with matching all the shoes, arranging plastic food on shelves and dressing Polly and her friends. It’s just the “Hi, my name’s Polly, what’s your name? Wanna buy some shoes? Let’s do roar ‘n’ snore at the Playmobil zoo!” bit that gets me. I used to be great at imaginary play as a kid: the cafe serving smoothies concocted from everything in the fridge (that turned my sister off peanut butter for life); the washing trolley with a slab of wood across the base, hung with scarves and pushed up and down the driveway as an aeroplane; and my all-time favourite, cutting off mum’s old dresses and pretending we were Heather Menzies’ scantily dressed friends in Logan’s Run. But that was a loooooong time ago. So I kept finding excuses to sneak off on errands during the Polly Pocket challenge – phone to charge, call to answer, drink to get, wee to have. Always with assurances I’d be back soon. When the Sprogs finally jacked up about my increasingly long absences, I offered a cunning diversion: choc-chip pikelets for morning tea. (The recipe is from a cookbook I edited, it’s called The ABC of Kids’ Cooking. You mix a cup of flour – does anyone actually sift these days? You’re supposed to do that first. I can never be bothered – with two tablespoons of sugar and half a cup of choc chips. Then mix 50g of melted butter with a cup of milk and a beaten egg. Tip the wet stuff into the dry stuff and combine. Drop tablespoonfuls into a hot pan – sizzle a bit of butter in it first – and cook until bubbles form, then flip briefly and eat.) After pikelets, we played four games of dominos (with Sprog 1 as “Robot Face”, see pic above). And then it was time for the triple lunch challenge: chicken and salad for me, baked beans and toast for Sprog 1, pasta with cheese for Sprog 2. Followed by free play with the baby chicks and an educational David Attenborough DVD (or two). After that came the reward challenge, aka sneaky excuse to leave the house: if the Sprogs scootered to the shops with me – in the rain – they could have an ice-block. Finally, the Sprogs’ cousins arrived for a sleepover. And I wasn’t required to interact with non-adults again until dinner time. I fed them all homemade meat pies, which were a big hit. Then they all disappeared until bedtime. Day over. The tribe has spoken: I survived Home Island.