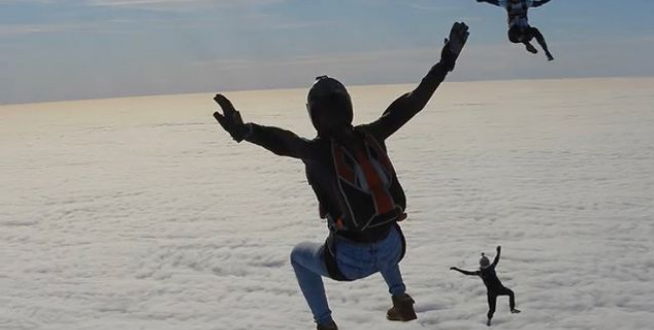 After two looooooong years, the youngest got her braces off yesterday. Her father made the appointment for 10.10am on a school/work day, then went on holidays to Western Australia.

As it takes the youngest at least 90 minutes to get to school, there didn’t seem to be much point in her going.

Also, I don’t normally have the youngest on a Monday and it’s the last few days of my current contracting gig, so I felt a bit awkward asking to be late to the office. The youngest was very not keen to get her braces off parent-less, so I bit the bullet and jiggled my schedule.

As we drove to the NIB dental centre, the youngest cheerily announced that she wants to go skydiving with her dad for her 16th birthday. I can’t wait to see the look on his face when he finds out.

I will never understand how I gave birth to a blonde, Amazonian competitive skipper who dreams about going sky diving. But somehow I did.

Anyways, we sat down in the waiting room 10 minutes early, so I buried myself in my phone. I looked up five minutes later and there was no sign of the youngest. I thought maybe she’d gone to the bathroom. Five more minutes passed and I realised she must have been called into the orthodontist’s room and I hadn’t heard anything because I’m still SOOOOOOOO DEAF.

Oooops. So much for being there for her.

She came out about 25 minutes later with the most gorgeous pearly whites and I made her catch the bus home because I had to frantically find somewhere to park that was less than 5km from the office.

So I’m not entirely sure it was my finest parenting moment.

However, on the way home from work I collected some extravagantly expensive medication for the rats from the exotic animal hospital. We had an unexpected death in the rodent family last Friday that has been taken very badly – even I cried – so I am sucking up the rip-off price to keep the other two alive.

I am such a soft touch. OK, gotta go. Wish me luck at the ENT.