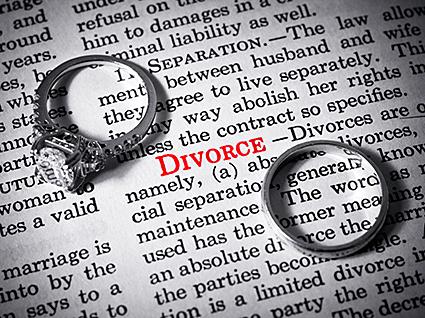 My ex dropped over yesterday for a family meeting about various kid matters and casually dropped into the conversation that he thought our divorce might have gone through.

He checked his emails on his phone and confirmed that, yup, it was final.

I’ve often wondered how I would feel about it finally happening. A little sad, maybe? But I felt absolutely nothing. I simply smiled and said: “Cool!”

Well, it has been seven years since he left – it’s a bit anti-climactic that the marriage chapter of my life has ended. On May 20 it would have been 21 years since I walked down the aisle to him and 31 years since we first met. Blimey.

I was beginning to wonder if it was going to take a similar amount of time to officially end the union. He’d been dragging his feet for six years and failed to sign the divorce papers that I served him twice – because he’s lazy, not because he wants me back. Then, out of the blue, he texted me a year ago to ask for a divorce. Blimey, you could have knocked me down with a feather.

Previously, even me noting that I didn’t think I should be the one deciding to turn his life support off hadn’t spurred him into action.

Despite my frustration with his previous inertia, we’ve had a very amicable co-parenting relationship over the years and our divorce was a no-fuss $950 internet special. I thoroughly recommend doing it that way if you can, rather than chucking away tens of thousands of dollars on lawyers. That’s such a waste. Spend the money on something nice, not nasty.

Divorced, huh? I still can’t quite believe it.

I also can’t quite believe that it’s been added to the collection of major life events that have happened to me around Valentine’s Day in recent years.

As mentioned last week, my ex-husband got the keys to his bachelor pad on Valentine’s Day 2014, after announcing three days earlier that he was leaving me.

And I miscarried my Mirena – a birth control device, not the name of an ill-fated child – the following year. It’s a plastic anchor-shaped thing that was in my uterus to try and mitigate my lady plumbing problems. My body decided to violently expel it late on Valentine’s night.

The divorce feels pretty uplifting compared to that.

The eldest was wondering if it might be useful for his HSC mark, but since he’s not getting an ATAR … no. And the youngest will be very annoyed we didn’t hold off until she was doing the HSC. Sorry, Pook.

I toasted the event with my friend Mel and a glass of Gordon’s Gordon’s Mediterranean Orange Distilled Gin & Soda after our walk last night. She loves the Gordon’s Sicilian Lemon Distilled Gin and our verdict on the orange one is that it’s yummy, but we prefer the tang of its predecessor. It’s very drinkable and summery and pretty though.

OK, better climb out of bed and start my officially divorced mum duties for the day. Geez that rain has been pelting down. Stay dry everyone.

2 thoughts on “It finally happened”