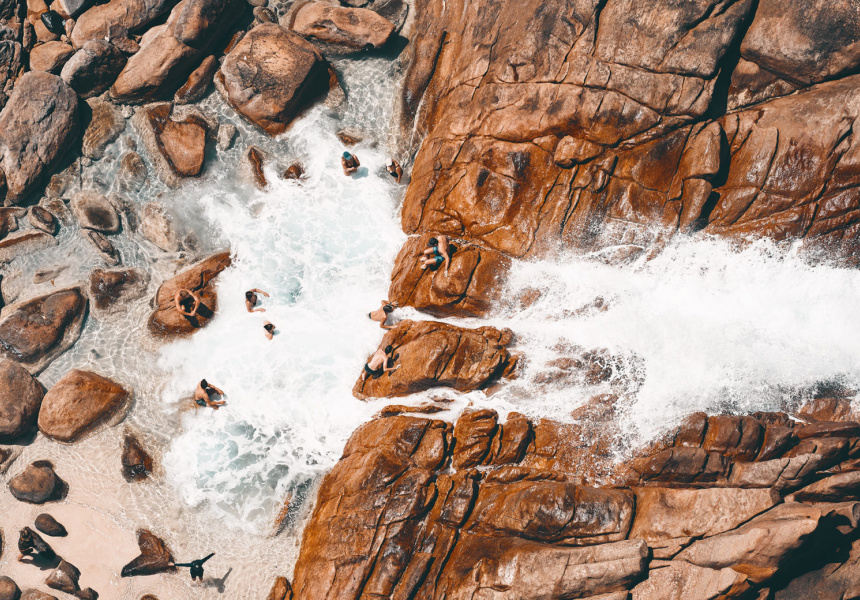 Remember me saying I needed to stop over-scheduling my life? Well that resolution went straight out the window on Friday.

DD and I were invited to an event to celebrate the 50th anniversary of Margaret River’s Cape Mentelle winery, which was held at North Bondi SLSC. The surf club has the most glorious views and the event included a stunning photographic exhibition by a talented bloke called Aquabumps.

That’s his professional name, his real name is Eugene Tan and he likes hanging out of helicopters taking amazing aerial views of beaches. When I win the lottery I will be buying a bunch of his work.

We had a great time, as we were lucky enough to be sitting with the NSW State Manager for Moet Hennessy and the lovely art director of WHO magazine. I spent a fab few hours talking both their ears off while eating and drinking delicious things.

Afterwards, DD dropped me home and dashed off to a business meeting. I frantically wrote a few stories for Drinks Digest. My favourite was this breaking news item: Emergency supplies of White Claw land in Australia.

Then I walked up the road for a drink with some local friends.

At 6.30pm, DD picked me up again so we could go and see some live comedy at the Sydney Opera House. We’ve been missing our live comedy during COVID-19, so it was great for both the comedians and us that it’s back on the agenda. Tom Gleason was the host and he was a cack.

But we were very tired as we drove home. Big day.

Saturday was sooooooooo farking hot that I could barely move or think, but I had 15 chapters of a book to edit – a last-minute, urgent freelance gig. My friend Fee lent me a fan and I tapped away sweatily for the day.

The youngest texted in the early afternoon to inform me that she’d forgotten to take her epi pen to the skipping camp she was attending. FFS. So I agreed to drop it off. Unfortunately, my car had been sitting in the 40C heat for hours and the air-conditioning needs to be re-gassed or whatever it is they do it fix broken air-conditioning. So I had to drive for 40 minutes in an oven on wheels, sweat dripping down my face. I rang my mother to distract myself from the living hell, but the call cut out halfway through because my phone overheated.

This was not good news, because when I got to the enormous venue hosting the skipping camp, I couldn’t call the youngest to let her know I’d arrived. I had to sit under a tree in the blistering heat until my phone cooled down enough to reboot.

Then I got back in the oven on wheels and drove to DD’s for an ocean dip, which was soooooooo lovely.

On Sunday I sat in front of the fan again to finish my book editing gig, then DD and I celebrated Thanksgiving with another dip to stave off the heat, followed by a turkey dinner at our favourite air-conditioned local bar.

I can’t say editing a book in 40C heat while still feeling a bit dizzy from vertigo was my favourite way to spend a weekend, but I was very grateful for the work. And I’ve been given such a nice mention in the introduction, which was such a sweet surprise. I’ll tell you more about the book when it’s released in a few weeks.

How did you survive the heat?

Song of the day: Billy Idol “Hot in the city”

One thought on “Sweet surprise”