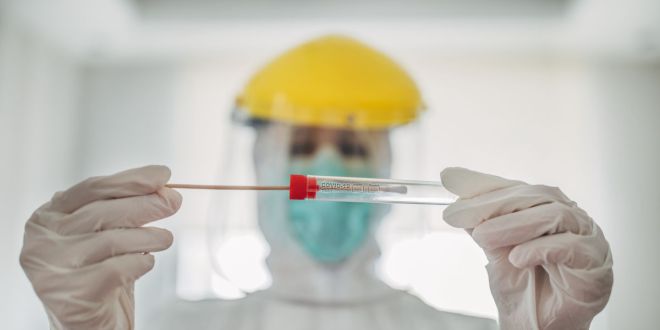 I didn’t want to have a COVID-19 test and I didn’t mean to get one, but I was talked into it.

I hate letting people down, which means I’ve said “yes” to many things I would have preferred to say “no” to over the years, like agreeing to let a gaggle of interns crowd around the business end as I attempted to give birth to my first child; and letting another one watch while my ill-fated Mirena was inserted.

I have no idea why all the examples I’ve given involve my vagina. Anyways …

The eldest had a mild cold last week, so I was a responsible citizen and kept him home from school. I was 99% sure it wasn’t COVID-19, so on the first day I was a slightly less responsible citizen and told the school it was a migraine to avoid difficult questions. On the second day I said it was still a migraine, but I knew I needed to fess up. And fessing up about a runny nose and slightly sore throat meant getting my child a COVID-19 test.

I drove the eldest to the local pop-up COVID-19 testing clinic and suggested he head in solo, but he was very not keen on heading in solo. So I went too and they said I should be tested as well and I said in a whiny voice “Do I have to?” and they said it would be preferable.

And that’s how I found myself donning my first face mask of the pandemic and doing the dreaded test. I warned the tester bloke that I had a very bad gag reflex and, upon reflection, it might have been better for the eldest’s confidence levels if I hadn’t gone first. I retched up a storm as that loooooooong swab poked at the back of my throat.

And then it was time for my nostrils. That brain-tickler swab is HORRIBLE. The eldest needed two tissues to cope with all the involuntary eye watering.

I could still feel where it had poked into the deep recesses of my nasal passages for hours afterwards. No part of the procedure actually hurt, but it was very uncomfortable.

I suspect you’re not supposed to tell people it’s horrible because it might put them off. I’ve had similar feedback about my frankness regarding the horrors of childbirth. (Childbirth was a PTSD shocker in my personal experience, but these things are subjective – my mother thought it was a complete doddle.)

I’m the sort of person who wants to know how bad it might be, so that it comes as a relief when it’s not quite as awful as I was expecting.

As I anticipated, our test results were negative.

That’s not to say another COVID test isn’t in our future, because we’re out and about now, so there’s always a chance someone will be unlucky.

But, knock on wood, Australia seems to be faring pretty well in the pandemic stakes.

I might even get to Christchurch at some point in the the next year, if I don’t spend all my money on new cisterns and shower heads.

It’s such a strange world we now live in, where international travel is no longer an option.

The weekend was a bit of an anti-climax after the testing week. DD finally got the fake blood out of my dining table, so I oiled it and it came up quite nicely. I went for a few walks. I had dinner with DD’s old friends. I made a Bill Granger lamb shoulder curry.

I also photographed my old Art Deco lounge suite to try and give it away on Facebook. It hurts my heart to do it because I’ve owned it for half my life. My ex and I bought it when it was brown velvet and smelly at an antique warehouse on Parramatta Road (I miss antique barns, they were fun). We got it restuffed and recovered twice over the years because it was so comfy. But it’s too big for my single-mum house and it’s sun damaged from being left to gather dust in the too-bright back room.

I can’t bring myself to just leave it on the nature strip, so I’m hoping to find someone new to love it. I feel like such a slacker to be getting rid of something that has been with me for so long, but I keep telling myself it’s time to move on.

One day, probably still a long time into the future due to financial restraints, I will finally buy my first-ever brand-new sofa. In my dreams it is comfy and squishy and covered in soft denim. Who knows if such a sofa exists, but it has been on my decorating bucket list for as long as I can remember.

I hope your weekend was a fun one, sans extra-long swabs.