There’s no room for a car in my garage – it’s too full of memories.

There are kids’ party decorations, folders of school art creations, knickknacks from my grandmother’s house, and a huge box of photos dating back to my great grandmother’s youth.

As I was ratting around in the box on Wednesday night, looking for a photograph of myself with my nephew as a bubba, I stumbled across a few snapshots that swept me back in time.

I put them into a little memory pile and brought them back into the house.

My box of photographs is very, very big, so there must be heaps of other treasures in it, these were just from the top layer. They’re a random bunch.

Click on the gallery for explanations of each one. 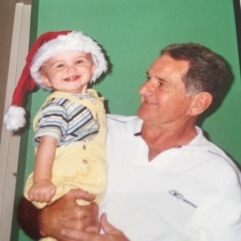 My cute nephew as a bubba with my adoring dad

My dad and my ex outside the asbestos palace – a block of four units – I bought and renovated in Merewether for $375,000 around 2001. Should have held onto it, would be worth a motza now. 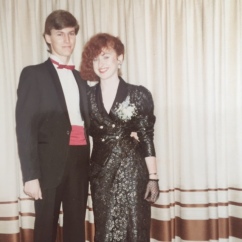 With my first boyfriend before my high school formal – my dress was very unconventional at the time, everyone else was in pastel taffeta.

My editor’s photo at Woman’s Day.

A photo from the shoot I did for my HSC major work – a take on a Glomesh handbag ad that was popular at the time.

My high school crush – Chris Evans – we’d secretly take photos of him in the quadrangle. 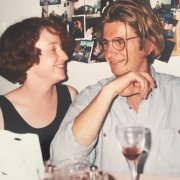 My ex and I in the very early years of our relationship, this photo was at a dinner party in a terrace I was renting with friends in George Street, Paddington.

Ooooooh, I feel so sentimental looking at some of them.

Speaking of sentimental, this is a photo of the donuts I missed at work yesterday.

They were sent to me by Cellarmasters to celebrate their new rosé wine subscription. The rest of the team scoffed them in my absence.

I missed out because I was taking the youngest to the doctor for some advice on her pus-laced tonsils.

That was a huge waste of $80 as the doctor said they don’t do anything about pus-laced tonsils these days, they just hope they clear up of their own accord.

In a desperate attempt to get my money’s worth, I launched into a wail about the youngest’s crappy immune system and my inability to get her allergic conjunctivitis under control.

The doctor had nothing of use to say about that either.

The youngest noted afterwards that I sounded like I was going to cry as I desperately listed the specialists I’ve been to see: GP, dermatologist, allergist, optometrist, ear nose and throat surgeon, opthamologist …

I sounded like I was going to cry because I feel like crying about the circle we keep going around in.

The GP has given me a referral to head back to the allergist. Sigh.

It was my second deep sigh of the day. The first came when I was handed the bill for my annual shitebox Renault Captur service: $750.

To add insult to injury, they took about 25 minutes to bring the car after I paid the bloody bill. FFS.

Oooooh the fury that burns in me about that damn Renault and its damn service centre.

Although, they assure me its new gearbox computer is working like a charm.

Have a great weekend. Mine will be spent tending to my bedridden children – while their throats and heads are sore their bellies still constantly ache for smoothies and fruit salads.

4 thoughts on “Lost moments in time”