It was a busy night in booze land on Wednesday.

Champagne Bollinger sent me a press release yesterday announcing it “hosted key media and guests at Fred’s in Paddington to celebrate the launch of the new La Grande Année 2008”.

Thanks for letting me know I’m non-key media.

Ah, I was busy anyway, celebrating International Tequila Day at a Patrón VIP media event at the Museum of Contemporary Art.

I’m not sure I qualify as “VIP media” either, but it was nice to be asked.

I took my sister along and for some unfathomable reason the photographer didn’t ask to take our photo in front of the media wall. I can’t think why when there were young things with cute names like Li-Chi Pan and Icy Ling striking poses. 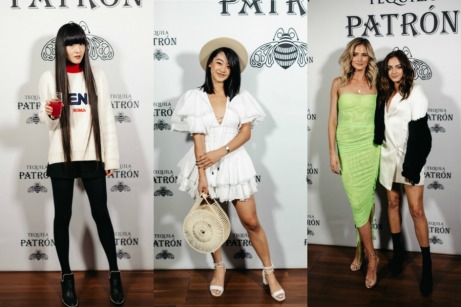 If you squint you can see the House sisters’ noses right down the end of the table on the left in this shot:

The room was chockers with 26-year-old Instagram influencers, all moaning about how difficult their lives have become since their “likes” were hidden on the social media platform.

If only they knew that when you open Instagram on your computer all the usual features are still there.

I told a bloke from GQ about it and he looked quite startled, mainly I think by the idea of looking at Instagram on a computer #oldskool.

He was equally startled by my excitement over Bindi Irwin announcing her engagement as we enjoyed our first Margaritas. I spotted the news while posting a pic of my cocktail. You can take the girl out of weekly magazines, but you can’t take weekly magazines out of the girl …

But I’m not sure Bindi is quite on the radar of young fellas at mens’ fashion mags.

Anyways, speaking of old school, you’d think I’d have learned by the age of 51 to drink water when out on the tear, but no, I neglected to sip a single drop.

So I felt a mite peaky when I woke up at 2am with the dry horrors.

Not entirely surprising when the event included welcome cocktails, plus an additional one matched to each of the three courses, then one for afters.

That’s a lot of tequila.

I’ve been teatotalling on weekdays for almost a month now, so you can imagine how giddy I was by the time the fifth cocktail landed in front of me. Though I only guzzled the first two and just taste tested the ones that followed.

The official spiel about the event is that guests enjoying a range of cocktails from Patrón’s flagship tequila, Patrón Silver and the aged tequilas, Patrón Reposado and Añejo that were matched to a delicious three-course dinner.

I’ve never been much of a tequila fan, but Patrón has converted me – it’s very delicious.

Head of Patrón AMEA and NAPAC, Nick Cox hosted the dinner and special guest and friend of the brand, DJ Jimmy2Sox, performed during the evening.

I Googled Jimmy before the event, apparently he’s a very famous DJ.

Everyone’s place setting included a metal bee – the symbol of Patron – that had their name engraved on it. Fancy!

We enjoyed the MCA’s amazing views of the harbour, city and Sydney Opera House while sipping drinks including the Patrón Paloma Samba with Patrón Reposado, Patrón Citrónge Orange, grapefruit soda, orgeat syrup and a Tajín rim, which was matched with a main course of angus beef tenderloin and chimichurri. There was also very yummy ceviche for entree …

And then I burst my VIP media bubble by heading home to recommence single mothering duties.

Things got even more real the next day …

Being slightly hungover wasn’t the best condition to greet the plumber’s bill for the gas leak, which landed in my email box in the late afternoon.

Then I processed the horror for a little while before heading home and having a little weep behind the wheel as I drove.

Poor me! In all senses.

But crying ain’t gonna pay the bills, which reminded me I owe the orthodontist $4000 on Monday and the opthamologist $350 the week after.

I may have wept again as I tallied it all up.

I am going to be broke FOREVER.

Ah well. Splashing in the ocean is free … and they reckon it will be sunny and 20C this weekend!

Meanwhile, here are some more happy snaps from the fancy tequila event: