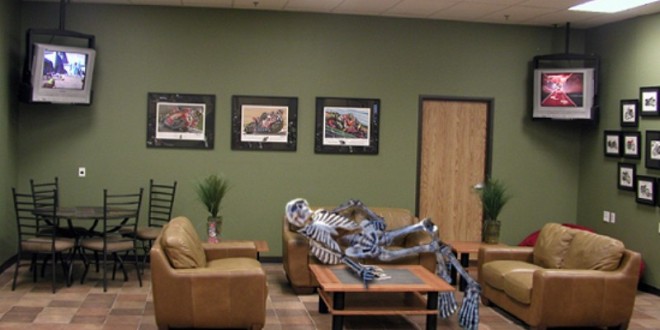 The eldest asked to see a doctor yesterday. Since the eldest has a terrifyingly high pain threshold I decided that was a sign the hijinks knuckle was probably broken.

I headed to work at the crack of dawn, well 7.45am, so I could meet the eldest at a medical centre with an x-ray service after school.

Around 6pm, we were still waiting to see a doctor. I think there must be a methadone clinic in the same building because there was quite the floorshow in that waiting room. At least it kept things interesting after my mobile phone battery died.

We finally got to see an animated bloke called Dr Gupta, who seemed pretty convinced that, yes, it was broken. I tried to explain how the injury occurred, but it sounded like the time my ex and I went to hospital emergency with the toddler eldest.

True story: toddler eldest tripped over my ex’s ugg boot and split their head open on the wardrobe door, then found an old baby bottle of milk under the couch and drank it and threw up and we weren’t quite sure if it was because of concussion or food poisoning.

Parents of the year.

The doctors asked LOTS of questions that night.

Last night’s doctor seemed to think it was more amusing than a case for DOCs that the eldest had a black eye, a bruised and swollen forearm and a broken knuckle. Though there seemed to be a bit of consternation that the injury had occurred on Friday and not been seen to until Wednesday … I was outside my parental experience zone, my child was on the Central Coast when it happened and seemed totally unaffected by the injury, I’m a single parent who works full time … what can I say …

After checking for concussion, Dr Gupta wrote an urgent referral to go upstairs for an x-ray, but when we got there the x-ray place had closed.

We’re heading back at 7.30am this morning … then returning 24 hours later to get the radiologist’s verdict.

The youngest called as we were driving home, demanding to know when dinner would be ready. I told her to turn the oven on and start peeling potatoes. You’d think I’d suggested she help Donald Trump broker world peace (bwahaha) by the outrage expressed on speaker phone.

“You want ME to peel potatoes?”

One potato was half peeled when I got home.

I frantically got the rest in the oven with some pumpkin, corn, eggplant, zucchini, cauliflower and chevap sausages … love a tray bake.

Wish us luck at the x-ray place this morning. Though the eldest is mainly stoked that there may be x-ray film with mangled bones to show off in the playground.

Mum not so much.

And then we’re back at the medical centre on Friday morning for the results. When I asked the eldest if it was an issue being late to school two days in a row, they were like “nah, no prob”. Things seem pretty easy going at the new school.

As opposed to the old one, which sent me an email yesterday, crankily reiterating its uniform policy: “Our students’ uniform is central to our school culture and a significant part of the respect our students experience in the wider community … It is most unpleasant for both students and staff when students have to be reminded daily about correct uniform requirements.”

Most unpleasant. Spare me. It’s a public high school FFS.

“Please note that the school track suit jacket is NOT a part of the regular uniform and can only be worn during sport or PE lessons. The school jumper and / or blazer are the correct winter warmth items and students are advised to wear white long sleeved t shirts or skivvies (or similar) under their long sleeved shirt if they are cold.”

Meanwhile the eldest is slouching around in filthy tracksuit pants and a hoodie with a giant hole in the front. Not one word from the school.

Hmmmmmmm. Welll, there’s something to be said for pride in your appearance, not just your injuries …

Song of the day: The Rolling Stones “Waiting on a friend”

PS The Long Dark Tea-Time of the Soul was a very funny fantasy detective novel published by Douglas Adams in 1988.