Go Team Teal! What an awesome weekend at the NSW/ACT State Skipping Championships.

Also a stressful one for this anxious mum …

When DD offered me a bite of his sausage sandwich after the youngest’s Double Dutch performance, my hands were shaking so much I had to turn him down.

It had tomato sauce and onions and everything. But I literally couldn’t hold it.

I find it soooo nerve-wracking to watch Team Teal perform … or any of the teams, really. My heart clenches when things go wrong after the kids have spent so many months practising.

And it’s so easy for things to go wrong. Just one or two missteps and the mojo can disappear.

The youngest had a shocker at the State Championships last year. She tried to do her solo routine while battling a terrible case of the flu and literally froze in front of the judges, unable to remember what to do next in her haze of fever.

I held her afterwards as she cried with disappointment and misery.

This year she walked into that community hall determined to nail it. And she did.

Team Teal scored Gold for their 4-person double dutch yesterday, despite getting off to a no-so-ideal start. It’s quite incredible, considering their fourth person has only been performing with them for less than a year.

Proud mama and all that jazz.

Aside from anxiously watching all those medal-winning performances, some of my favourite parts of the weekend included seeing the camaraderie between the Team Teal girls and their coach; the youngest’s former primary school teacher turning up for three hours yesterday to cheer her on; DD also turning up for a few hours to cheer her on; an old colleague spotting me through the glass doors as she headed to her son’s AFL match and coming in to say hello after not seeing me for at least seven years; DD wandering across the hall to sit and have an amiable chat with my husband (argh!); and watching all the cute, teeny tiny seven-year-old skippers do amazing routines.

My least favourite moments: every time I got up off the metal spectator bleachers, feeling every minute of my 50 years on this earth and having to slowly straighten myself into a standing position while making quiet moaning noises. 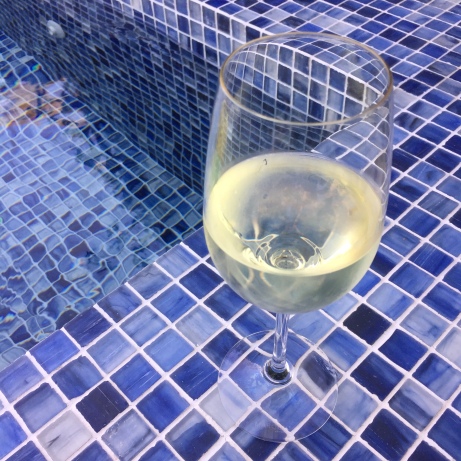 Afterwards, the youngest headed off to party with her teammates and I drove home while the adrenaline ebbed away … fortunately my sister texted offering a wine in the spa, so I detoured there and had a lovely time decompressing … then went home to shower off the chlorine and go out to dinner with two friends at a yummy new Vietnamese restaurant in our local shopping centre.

Here are a couple of videos of Team Teal instead of Song of the day: