A former colleague, Kelly Baker, wrote a heartfelt post for 9Honey this week about how tough single motherhood can be.

She said: “Please don’t refer to yourself as a single mother unless you are one. Don’t say it as a joke. Don’t suggest you now have an understanding of what it’s like because your husband worked a lot this week. Unless it’s your life you really don’t have any idea.”

She writes about a distressing recent  experience when her son was rushed to hospital with appendicitis.

You will be the one who holds his hand while he’s prepped for emergency surgery at 11pm and while he is operated on for five terrifying hours you will sit alone in the dark and wait.

Nobody will hold your hand. Nobody will tell you that your baby is going to be okay, that he and you will leave this hospital healthy and well. Because you’re a single mother and you don’t have a partner to fulfil that role.

You will spend the week in hospital by your child’s side because he’s yours and you will keep him safe and protect him with everything you’ve got – but nobody will do the same for you.

Not today. Not tomorrow. Or next week. At least as far as you know. Because you’re a single parent. And this is what it looks like.

She also talks about sitting alone at her child’s primary school ‘graduation’ and “weeping because you’ve worked so incredibly hard to get to this point that you’ve not even had the space to contemplate it. And again, you’re all alone. There’s no co-parent by your side to wipe your tears, squeeze your hand or share the moment in all it’s richness.”

It reminded me that I’m pretty fortunate in the single mum stakes. Sure, it has its exhausting moments, but my experience has been a lot easier than hers and so many other single mums out there.

OK, my ex isn’t going to hold my hand when times get tough, but he will be there to support me. I am not alone on the parenting journey because we have chosen to keep walking that path together in a productive way, despite the messy end to our relationship.

Not everyone gets that chance. Even if one ex-partner is willing, the other may not be. And if both parents don’t come to the party, it’s an unpleasant, stressful car crash for everyone involved.

I’m lucky to have someone to share those terrifying parenting moments and proud milestones, even though we no longer share a bed or a home or a marriage.

We did it again last night – the eldest was performing at the Sydney Opera House with her high school band. We met in the foyer, we sat together for the performance, we proudly discussed the amazing children we had created. We grabbed our daughter at the stage door afterwards and I gave my ex a lift to his car. Then we went our separate ways to our separate homes.

And while it may not be the perfect outcome for two kids who’d love nothing better than to live with both parents under one roof, it’s a pretty good second option.

Not a bad location for a school concert.

Watching the sun set while waiting for the show.

OK, it might have been nice to have someone to share a glass of wine with before the show … instead of a couple of seagulls.

The band performing on stage.

The choir singing Auld Lang Syne – the conductor made the audience stand and sing along too. It was quite lovely. 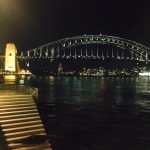 Before we went home, the eldest took us to the steps at the back of the Opera House to see the seal that lounges there. It was SO COOL.

Close up of seal …

Song of the day: Fleetwood Mac “Hold me”

4 thoughts on “Nobody will hold your hand”