I adore my hairdresser. And not just because he cuts my hair so well.

Mark and I have been “together” for about 20 years. What I’ve grown to love more than anything is that I’ve become what you might call my “true self” with him in recent times. I’m not quite sure what it is about our relationship that prompts me to confess outrageous things when I’m in his chair.

They’re not confessions in the traditional sense, as they’re not necessarily things I’ve done, they’re more my true thoughts. And sometimes they’re a bit unvarnished.

As part of the trust we have, he feels completely comfortable calling me out when I’m being a privileged wanker without fear that I’ll never darken his doorstep again.

It’s quite refreshing to be your true self with someone. Although it had its moments on Saturday.

First, Mark was horribly ill and could barely speak, so he handed me a copy of Vogue Living and croaked that I was to read that and not talk to him during our session.

Oh. I’d rather been looking forward to a chat.

I’m not very good at being quiet. I tried my best and flicked through the magazine attempt to find it interesting. I don’t really enjoy magazines like Vogue Living because no one I know lives like that. And I have no desire to. It’s all so pretentious and cold.

About halfway through I saw a poufy, gypsy-style shirt in a nice shade of sage that I quite fancied. It was hanging in a shop the magazine had featured. I’ve lost sense of what’s stylish because I have no discretionary money for clothes shopping, but I thought I would be safe pointing it out as it was in Vogue and all.

Mark huskily told me it was the most awful shirt he’d ever seen and wouldn’t suit me at all. He said I was better off in something more tailored. A rather disturbing word coming from a groovy gay owner of a Darlinghust hair salon.

Sigh, between him and DD with their desire for me to wear fitted clothes.

Mark quickly relented on the talking thing – he was particularly pliable after the cold medication kicked in – and we mused the subject of Mia Freedman’s messy week. He was cutting my hair through the Cosmo Mia years, so he’s quite well versed on the subject.

He said I HAD to read a story about the whole scandal in the Sydney Morning Herald and shuffled off to get me a copy. I was waylaid by a gossip item early in the paper, which gratuitously mentioned Marieke Hardy describing Mia as “execrable” – Mark was delighted by the word “execrable” and said he couldn’t wait to use it over the weekend, but that wasn’t the article he was referring to. The article was this one, called How Mia Freedman Got Her Roxanne Gray Interview So Wrong. Interesting reading.

I then flicked to a story about Channel 10 – such an unfortunate train wreck.

And then to the harrowing events in London with the apartment block tragedy. I wanted to cry as I read that one.

We discussed each story  … Mark soldiering on despite his cracked voice and internal misery.

I also gave my strident views on why Rebel Wilson won her defamation case. (I’m beginning to worry I’m getting a little too strident in my old age. I’m still mortified about being so enthusiastic at a recent Women in drinks council meeting that my voice kept rising until I was almost yelling at everyone in the room as I explained my social media role to them. The shame.)

It ended up being a good chat with Mark after all. We disagreed on some things vehemently, we agreed on others equally vehemently.

He was horrified that I wanted to go on holidays to New Zealand. I was horrified by his suggestion that I sell up and move to Berkeley Vale to release some of my capital for having fun.

Anyways, always such an interesting way to spend an hour.

Are you your true self with your hairdresser?

PS I find myself oddly unmoved by Beyonce having twins … you?

I went for a walk with my friend Claudia and enjoyed this glorious view.

My friends Wendy and Andrew celebrated their 20th wedding anniversary (and I found this photo of them from BEFORE they were married) … such a lovely couple. 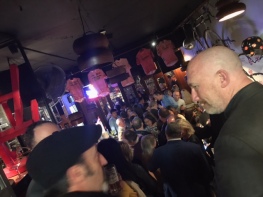 The 20th anniversary party was held at their friend’s bar, York Lane.

There was French champers!

Afterwards we watched the light show and fireworks on the last night of Vivid.

The next morning I dragged DD to be brutalised at my pump class. Then we blew all the hard work eating THIS – hash browns with pulled pork, poached eggs and hollandaise.

Afterwards we decided a couple milestone needed to be ticked off – a visit to IKEA … I got this shelving unit and DD built it for me. I LOVE it. We also stocked up on frozen meatballs and mash.

Song of the day: This was my favourite Split Enz song when I was a teenager. Oh, how I loved it. It has no relevance to today’s blog, other than reminding me how beautiful love and acceptance can be.