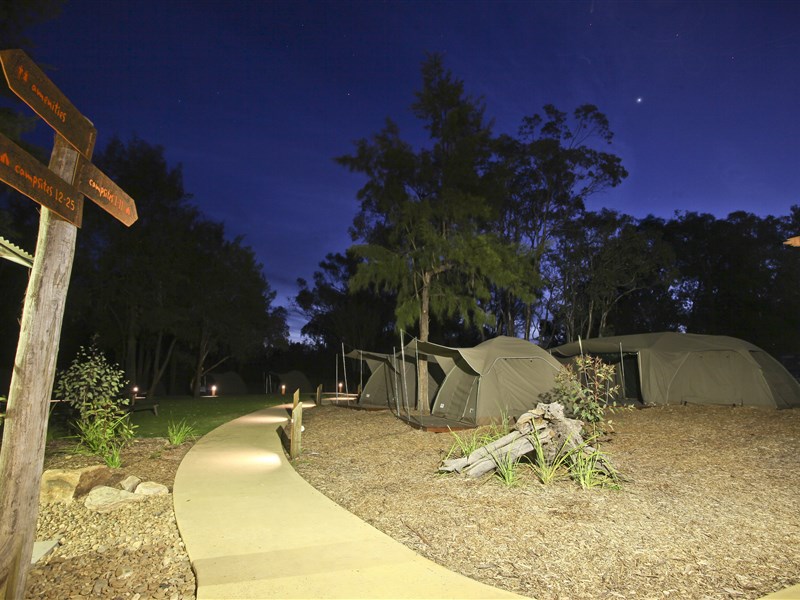 But it’s been forever since we visited.

So it seems rather crazy that we travelled all the way to Dubbo last weekend to go to the zoo. But Dubbo Zoo isn’t just any zoo.

As the website explains: “With over 3sq km of wild and wonderful bushland and 700 animals, Taronga Western Plains Zoo offers a safari adventure right in the heart of NSW. Find yourself surrounded by magnificent wildlife on wide open plains. Whether you stroll across the grasslands or hire bikes or carts, it’s a fun way to spend time with family and friends, away from it all.”

We decided to go all out and stay overnight at Billabong Camp in the middle of the zoo. Not cheap. But comprehensive. For $450 you get …

Oh, except for sleeping bags – they were extra.

Camping is not really my thing (which explains why we had to hire sleeping bags). But I’ll get to that later.

Bicycles are also not my thing, despite getting one for Christmas last year in a burst of get-fit enthusiasm that waned after my “splits injury” – but cycling did seem the way to go, so I saddled up, swung my wonky tailbone over the seat and puffed my way around the zoo TWICE over the course of the day.

I was quite proud of myself, but Husband dismissed it as not being very far. Pffft.

At first, cycling around the dusty zoo dodging the cars (there’s no dedicated bike track, so you share the road … hmmmm), I wasn’t all that impressed with the experience. But it starts to grow on you – oooooh, giraffes! Oooooh, zebras! Ooooh, lions!

And it’s also lovely that the animals get to live in such natural, extensive surroundings.

We were lucky enough to stumble upon zookeeper talks for the elephants, rhinos and tigers in our travels, which really added to the experience.

It only gouted down with rain on us once but we were close to a picnic area, huddled under the roof and only got slightly drenched.

The kiosk was a little country minimalist, but it was kinda retro yum to have an egg and lettuce sandwich for lunch … swept me back to childhood.

The bikes had to be back by 3.45pm, which is where I’ll backtrack and tell you the minor bits (other than the brief gouting rain episode) that sucked about the experience.

During the $450 payment process months prior to the visit, no one mentioned that it wasn’t necessary to line-up at the ticket counter to enter the zoo. There’s 45 minutes of our lives we’ll never get back (note to Dubbo Zoo – a couple of extra people on the ticket desk in the morning wouldn’t go astray; nor would clearer instructions about entry).

Then there’s the part where you take the bikes back and head to Billabong Camp only to discover the gates are locked and you can’t get in until 5pm. Imagine a hotel getting away with that malarky?

So we stood around for an hour gnashing our teeth when we’d have really liked to be kicked back with a coldie on the verandah of our over-priced tent. 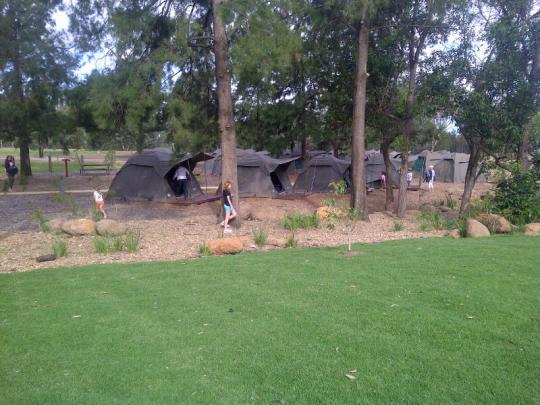 Only getting into the camp at 5pm also meant it was go, go, go from the moment you walked in. Not much time to bond with your fellow campers between animal encounters and clagging in bed.

The animal encounters were rather good though – stumbling around in the dark observing mummy and baby quokka (or was it quoll?), a koala on the move, and patting a wallaby were all pretty cool.

Then it was lights out on a camp bed with a sleeping tablet for me … and not much sleep: night activities ended at 10pm and the bell rang again at 6.15am for brekkie. Yawn.

We emerged bleary eyed and staggered off on a behind-the-scenes zoo visit that included being a metre away from a tiger and watching simangs and white-handed gibbons show off to an audience.

That was pretty awesome.

Then there was time for one more twirl around the zoo – in the car this time – before we hit the road for home.

The kids LOVED it. They wanted to spend another day cycling around …

But 24 hours was enough for me.

Do your kids love the zoo?