I normally like to keep my gossip round-up snippets short, but the story of the week requires a little explaining … Sinead O’Connor and Miley Cyrus’s war of words. 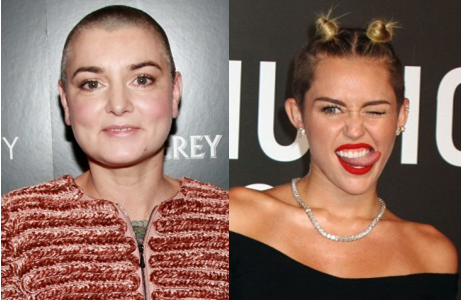 It all started when Miley told Rolling Stone magazine that Sinead’s iconic video for her hit ‘Nothing Compares 2 U’ was the inspiration for her ‘Wrecking Ball’ video. No, not the part where Miley appears naked on a wrecking ball and licks a sledgehammer, but the singing and crying to the camera in an extreme close-up shot. She told Rolling Stone: “I wanted it to be tough but really pretty – that’s what Sinead did with her hair and everything … I think it will be one of those iconic videos, too. I think it’s something that people are not gonna forget.”

Sinead wasn’t impressed, so she wrote an open letter on her website in response: “I am happy to hear I am somewhat of a role model for you and I hope that because of that you will pay close attention to what I am telling you. I am extremely concerned for you that those around you have led you to believe, or encouraged you in your own belief, that it is in any way ‘cool’ to be naked and licking sledgehammers in your videos,” the 46-year-old writes.

“It is in fact the case that you will obscure your talent by allowing yourself to be pimped, whether it’s the music business or yourself doing the pimping … Nothing but harm will come in the long run, from allowing yourself to be exploited and it is absolutely NOT in ANY way an empowerment of yourself or any other young women, for you to send across the message that you are to be valued (even by you) more for your sexual appeal than your obvious talent.”

“Whether we like it or not, us females in the industry are role models and as such we have to be extremely careful what messages we send to other women. The message you keep sending is that it’s somehow cool to be prostituted … it’s so not cool Miley … it’s dangerous.”

Miley responded by posting a 1992 photo of Sinead ripping a photo of the Pope on Saturday Night Live on her Instagram account. Then posted screenshots of 2-year-old updates from Sinead O’Connor’s Twitter account, in which the singer sought psychiatric help. “Before Amanda Bynes…. There was…” Miley wrote.

Sinead snapped back with another open letter: “Miley… Really? Who the f**k is advising you? Because taking me on is even more f**kin’ stupid than behaving like a prostitute and calling it feminism.

“You have posted today tweets of mine which are two years old, which were posted by me when I was unwell and seeking help so as to make them look like they are recent. In doing so you mock myself and Amanda Bynes for having suffered with mental health issues and for having sought help.”

“Have you any idea how stupid and dangerous it is to mock people for suffering illness? You will yourself one day suffer such illness, that is without doubt. The course you have set yourself upon can only end in that, trust me. I am staggered that any 20 yr old woman of the 21st century could behave in such a dangerous and irresponsible manner as to not only send the signal to young women that its ok to act like prostitutes but also to the signal that those who have suffered or do suffer mental health problems are to be mocked and have their opinions invalidated.”

And THEN Sinead posted on her Facebook page: “Ms. Cyrus’ lawyers will be contacted by mine regarding this matter. I confirm also that I do not at all support or condone the abuse or mockery of those who have been brave enough to openly discuss mental health issues. Mockery causes deaths. It is an unacceptable form of bullying.”

Miley suggested the two singers “meet up and talk”, to which Sinead replied: “Miley, I have no interest whatsoever in meeting you. You had plenty of time yesterday to abuse Amanda Bynes … an entirely innocent party … and myself … who also did nothing to deserve your abuse, along with every other sufferer of mental health problems and every person who suffered abuse at the hands of priests.

“When you end up in the psych ward or rehab I’ll be happy to visit you … and would not lower myself to mock you. Be a proper woman and make the public apologies.”

>> Kelly Osbourne teamed up with Taylor Swift for a night of baking.

>> It’s been 10 years since she divorced Andre Agassi, but Brooke Shields is still BITTER. Click here to read the remark he made that she’ll never forgive: http://bit.ly/18AqOeb

>> She’s Hollywood royalty now, but Jennifer Lawrence has revealed she was told she was “too fat” during the early stages of her career. Click here to read her comments (and what she plans to say if it happens again): http://bit.ly/GAolHK

>> In other JLaw news … she’s filmed a cameo for the Dumb and Dumber sequel, starring Jim Carrey and Jeff Daniels. According to The Hollywood Reporter she spent a day on the set of the movie, playing a young version of Kathleen Turner’s original character, Fraida Feltcher. In a recent interview with talk show host Jimmy Fallon, Jennifer confessed the movie was one of her favorite comedies, telling the talk-show host, “I know every word to Dumb and Dumber, Step Brothersand Anchorman.”

>> Forget gentle lullabies and soothing noises – THIS is how Channing Tatum gets his baby daughter Everly to sleep. Find out his secret here: http://bit.ly/16HpadD 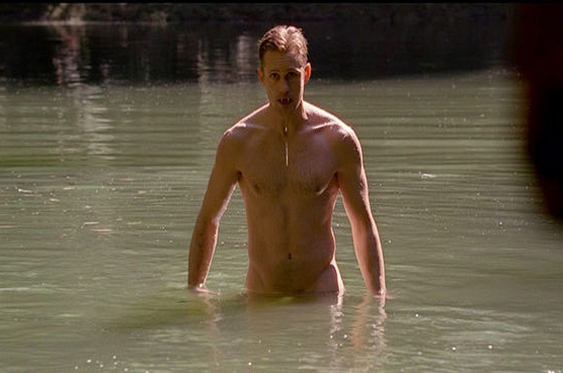 >> Fancy 5 pics of True Blood’s Alexander Skarsgard… naked? Not to mention a video of him getting soapy in a shower … Click here for a treat: http://bit.ly/1bthycQ

>> In a frank interview with Elle magazine, Natalie Portman has confessed that she never realised being a mother would be such hard work: “I love being a mum, but it’s much more intensive work than being an actress – going to work feels like you’ve got a day off,” she said. “Not that I want a day off from being a mum, it’s just perhaps I had this impression before that mums don’t work. But they work more than anyone.”

>> So, you found your kid watching the finale of ‘Breaking Bad’… here’s a hilarious lesson in how to explain it to them: http://bit.ly/1fYvbno#breakingbad 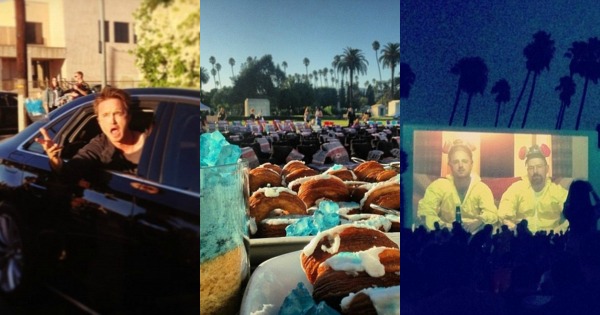 >> Speaking of Breaking Bad … Aaron Paul, who stars as Jesse Pinkman in the hit series, organised a farewell for the show at Hollywood’s Forever Cemetery. Thousands of fans and celebrities gathered for a private screening of the finale. Ewan McGregor and Marilyn Manson were among the famous faces spotted in the VIP section, while Aaron and co-star Bryan Cranston spoke before and after the screening. Breaking Bad-themed food, including ‘meth doughnuts’ and custom cocktails called The Tread Lightly and A Trip To Belize were served.

>> Katy Perry has revealed what John Mayer gets up to in bed at night… and it’s not what you’d ever have expected. Click here for details: http://bit.ly/1eTd43d

>> After battling his own addictions in the ’90s, Robert Downey Jr has been faced with his son, Indio, fighting a similar issue. Robert was famously arrested for possession of marijuana, heroine and cocaine, and went to rehab and prison multiple times before getting his life back on track. Now it appears his 20-year-old son is currently in treatment for a dependency on prescription pill medications. His mother, actress and singer Deborah Falconer, told the National Enquirer: “He was not addicted. He was taking one pill a day … We are hoping to do it the homeopathic way rather than with medications. He’s being treated with vitamin supplements and organic foods … He’s doing great. He’ll be back playing music and doing better soon.”

>> Singer Anastacia revealed she underwent a double mastectomy earlier this year following her second breast cancer diagnosis. The 45-year-old released a statement which said: “I was diagnosed with breast cancer for the second time earlier this year and am currently in the final stages of recovery after undergoing a double mastectomy. It has been an intense journey but I am feeling great and ready to start the next chapter.”

>> Justin Bieber took his arrogant behaviour to new heights – literally. The singer was photographed being carried up the Great Wall of China by his bodyguards. And then he had the audacity to pose for a pic of himself at the top with the caption: “We made it up top!! #GreatWall”

>> She’s the 16-year old New Zealand singer who became the first solo female artist in 17 years to top Billboard’s “Alternative” song chart. The video for her first song, “Royals,” has been viewed more than 6 million times. And now she’s hanging with Rebel Wilson. Could Lorde’s life get any cooler? Rebel tweeted a photo of the pair before appearing on the Jimmy Fallon show with the caption: “Just hanging with Lorde backstage!! Southern hemisphere takeover on Fallon tonight x”

>> Weight Watchers announced that Jessica Simpson is a spokesman for their brand again. The singer first signed up with them – in a reported $4million deal – after gaining 70 pounds while pregnant with her daughter Maxwell, but she quit after getting pregnant with her second child, Ace Knute, just seven months after giving birth.

>> Alanis Morissette and her husband Mario “Souleye” Treadway are being sued by their former nanny Bianca Cambeiro. According to court documents, Bianca alleges the couple never paid her overtime or allowed her to take meal or rest breaks during her 12-hour shifts caring for their son Ever three to four days a week.

>> In a promo image for the new season of Saturday Night Live – which she was guest hosting – Tina Fey paid homage to Farrah Fawcett by striking the Charlie’s Angels star’s iconic pose and donning her red bathing suit and famous flick ‘do. The original poster broke records, selling six million copies since its release.

>> And finally, even if you’re not a Robert Pattinson fan, these 25 GIFs are guaranteed to make you a little glossy eyed. Click here for the rest.