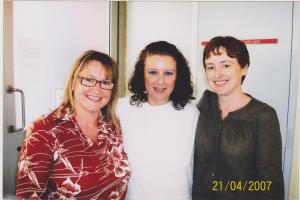 There’s a record I need to set straight.

It’s about a story I wrote for www.mamamia.com.au this week. The story concerned my friend, Kathleen Folbigg. Kathleen is serving 26 years in jail for the murder of her four children.

And there’s something I need to clarify. Actually, there’s a lot of things.

OK, here goes … I wasn’t championing Kathleen Folbigg’s innocence. I was saying she was failed by our justice system. There wasn’t enough evidence to convict her. After reading a book called Murder, Medicine and Motherhood, written by the Canadian academic Emma Cunliffe about Kathy’s case, I’m convinced she didn’t get a fair trial.

The point of my story was to make people wonder “what if?” To consider the possibility an innocent woman might be behind bars.

My initial submission to Mamamia was a fairly dry affair. So they requested some colour on what it’s like to visit a prison. I shared a few anecdotes, including one about about a woman in fuzzy bed socks saying f*@k a lot. And I came across as a flibbertigibbet. Serves me right.

My story at Mamamia attracted many heated comments. And not just about me being a flibbertigibbet. The majority were from people who believe Kathy is a psychopath who murdered her babies and should rot in jail. It amazes me how adamant people can be with their opinions when they haven’t followed the case closely and don’t know the woman involved. Some of them even mix her up with Kelli Lane in their rush to condemn.

These people obviously live in a very black and white world that doesn’t allow for any grey. I’m a grey-area girl. I know a jury has convicted Kathy as a serial killer, but there have been developments that cast doubts over the evidence they were given.

And, yes, I know Kathy’s diaries seem pretty damning. They disturb me too. I’ve told her that if she gets another day in court, she needs to take the stand and explain them. Cunliffe’s book has convinced me the diaries were the only thing that convicted Kathy. All evidence presented was circumstantial – there was no physical evidence she had suffocated her children.

I haven’t asked Kathy to explain her diaries to me because it feels intrusive and ghoulish. Plus, there’s not a lot of privacy when I visit her in prison. I worry that she will be overheard by guards, other prisoners and their visitors. Things that Kathy has said in the past have been twisted in the media and I’d like to avoid that happening again. So I tend to stick to lighter subjects, like changes to the prison buy-up system (the way prisoners purchase stuff like shampoo and deodorant and snacks), her new job, her new cellmate etc.

Some commenters question why I started visiting her in prison when we weren’t that close at school. They wonder about my motivations. I started visiting Kathy because I felt compassion for her as a former schoolmate. Pure and simple. Plus, we weren’t exactly strangers to each other at high school – her boyfriend was one of my boyfriend’s best mates. I could have left Kathy to her lonely prison life, but I decided to reach out. And I’ve since chosen to become an advocate for her getting another day in court. It wasn’t an easy decision to make, but it felt like the right one.

At last count there were more than 200 comments on my Mamamia story. Many of those comments are disturbingly similar to the stuff people said about Lindy Chamberlain when she was on trial. People refused to believe a dingo had stolen Lindy’s baby. They firmly believed she killed her own child with a pair of nail scissors. She spent three years in jail for a crime she didn’t commit.

At the time of the investigation into Azaria’s death, the Northern Territory police referred to Lindy as being “cunning”, “a nut”, “a religious nut”, “someone with killer eyes”. As they searched for a motive, they came up with increasingly bizarre theories: it was planned by either Lindy or Michael or both of them; one of their sons did it and they covered it up; they wanted fame; they wanted money; Lindy was jealous of her baby; Lindy had post-natal depression.

Commenters at Mamamia use simliar language when referring to Kathy. They call her “evil”, “cold” and “manipulative” because she doesn’t fit within their acceptable framework of how a grieving mother would behave.

The commenters accept the testimonies presented in Kathy’s case. So did the jury who convicted Lindy. After the first inquest, police commissioned British forensic pathologist James Cameron to examine Azaria’s jumpsuit. He found it had been cut by scissors and there was evidence of a wet, bloodied handprint. He was later proved wrong.

In Murder, Medicine and Motherhood, Emma Cunliffe concludes there was a “preparedness of expert witnesses to generalise extemporaneously – and wrongly – about the state of medical knowledge. The evidence that medical literature did not reliably report any case in which three or more infants from the same family died of natural causes was simply incorrect. Research published since Folbigg’s trial has cast further doubt on the criminal explanation for recurrent unexplained infant deaths.”

Some of the Mamamia commenters have decided they are medical experts in their own right, asserting: “Medical evidence does not support the deaths of 4 babies in surprisingly similar circumstances.” And “Mental illness my arse! She knew what she was doing when she did it. She blamed cot death when she went too far. That’s not mental illness.”

Another refers to a feature written by Lee Glendinning: “When each baby came, love at first sight didn’t come with it. Kathleen would sit at home, alone, despairing. Maybe it was the breast feeding. She tried each time, hoping it would help with the bonding, but it never worked. She knew it was not a physical thing, but a psychological one. Sitting in the lounge chair, her feet tucked under her, she tries to psyche herself into trying again, but the idea of it repulses her.”

It’s an evocative piece of writing. Yet, according to a mutal friend, Megz, Kathy couldn’t breastfeed because she had inverted nipples. That’s why she used infant formula, not because breast-feeding repulsed her.

Some commenters even confuse her with someone else jailed for murdering her child. “I’m not going to waste my money buying the book, so can you please tell me how the missing child is explained? Folbigg testified that she gave the child away but couldn’t remember to whom …”

None of Kathy’s children went missing. That was Kelli Lane.

People are often convicted by the public and media before they even get their day in court. As Hedley Thomas discusses in a feature he wrote for The Australian about Lindy Chamberlain and Gabe Watson (the American whose wife drowned while scuba diving in Queensland and was charged with her murder, with the case later being thrown out by the judge due to lack of evidence) –  http://www.theaustralian.com.au/national-affairs/opinion/judged-guilty-in-the-minds-of-the-mob/story-e6frgd0x-1226281032516 – sometimes mob mentality and reliance on circumstantial evidence overshadows a lack of concrete fact.

If Kathy’s case does get re-examined and another guilty verdict is reached, I will accept that decision. I will believe that justice has been served. It will not stop me visiting Kathy because if she is found guilty (again) then she must be mentally ill. And whether she is innocent or mentally ill, she needs help not hate.

27 thoughts on “Help not hate”