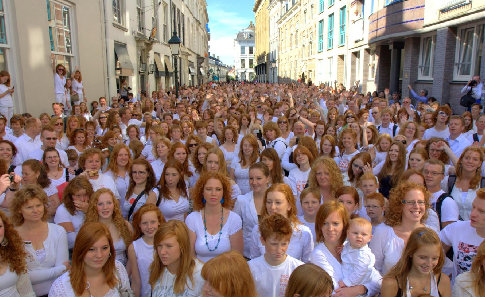 I didn’t know Hug/Kiss A Ginger Day existed when I wrote a blog about it last year. I just thought it was a cool title. Barely a day goes by when someone doesn’t Google “Hug A Ginger Day” and come to my blog, so there are obviously a few redheads out there needing some love. The day was actually sparked by an awful thing called Kick A Ginger Day. Hilarious idea that one. There are various dates for celebrating fiery tresses, depending on what country you live in – this one was tweeted by Lindsay Lohan in January.

There’s also this brilliant festival in the Netherlands every year called Roodharigendag (Redhead Day). It’s a two-day gathering for people with naturally red hair (see pic above). Thousands of people turn up wearing whatever the colour theme of the year might be. This year it’s being held on Friday, August 3o, and the dress code is blue. Visit the offfical website here.

And good for them. I still remember this youTube video (below) being shared by a Facebook acquaintance, who mocked the poor bastard. CopperCab rants emotionally about how he was bullied in school because of his red hair. It’s pretty confronting, has received more than 32,00,000 views and over 210,000 comments (many of them unkind).

Anyway, here’s my blog about life as a redhead, in case you missed  it first time around: 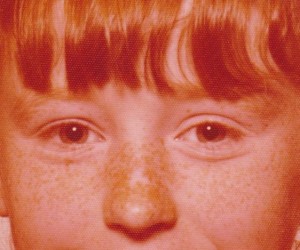 It ain’t easy being a redhead. You are pale, you are freckly, your hair is a weird colour and people make fun of it. I have no idea why I was so thrilled when Sprog 1 was born with red fuzz on her head. I didn’t think, poor little thing, you’ll blister in the sun, you’ll be called a ranga, you’ll curse your tresses. I was totally besotted with my little mini-me. Sprog 1′s red hair grew like grass, straight up in the air. It was quite the talking point. When gravity finally took hold, it fell into a perfect, silky bob (with a little help from the hairdresser). It never needed combing, it was streaked with gold and glorious. Sprog 1 has never mentioned any ranga teasing in the playground. It probably helps that she has honeyed skin, not ghostly white; she’s freckle free, aside from a cute little sprinkle on her nose; and she has dark lashes and brows, not invisible ones. My childhood wasn’t quite so asthetically pleasing. You couldn’t put a pin between my freckles (well, except for the big white spot in the middle of my nose that got so badly burnt once, all the melanin was seared out). Many years were spent in the shadows during my teens, studious fading those bloody freckles. Then I went on a school ski trip and recoiled in horror when I looked in the mirror at lunchtime. Every damn one was back, they were bold and I wanted to weep. Fortunately, in my 20s, I grew into my hair and out of my freckles. And I discovered there were men who fancy redheads. Like Husband. But being a redhead still presents challenges. I burn in bright sun in 15 minutes flat, even when slathered in 30+ suncream. Going on Asian holidays often feels like I’m the bearded lady in sideshow alley. I remember walking into a suburban park in Bangkok once and a hush falling over the crowd. Everyone stopping what they were doing and turned to stare. In Singapore, they call caucasians “ang-mo”, which means “red-haired” or “red devils”. They’re not the only ones – in the Middle Ages, red hair and green eyes were thought to be signs of a witch. Redheads require higher levels of anaesthetic, which makes the dentist lots of fun at needle time. Wikipedia includes such cheering facts as: “In November 2008 social networking website Facebook received criticism after a ‘Kick a Ginger’ group, which aimed to establish a “National Kick a Ginger Day” on November 20, acquired almost 5000 members. A 14-year-old boy from Vancouver who ran the Facebook group was subjected to an investigation by the Royal Canadian Mounted Police for possible hate crimes.” And “In December 2009 British supermarket chain Tesco was forced to withdraw a Christmas card which had the image of a child with red hair sitting on the lap of Santa Claus, and the words: “Santa loves all kids. Even ginger ones” after customers complained the card was offensive.” I was discussing the downsides to being a redhead with a fellow tawny mum over drinks the other night. And we agreed that whatever the disadvantages, it was better than being a redheaded man. Or worse, dating one. Redheaded women are generally repelled by redheaded men. And vice versa. Perhaps it’s a biological imperative to stop albinism or something. There are exceptions. I was completely ga-ga over a ginger boy called Gavin at my Sunday School. And I once shared a flat with a divine rust-haired surfer (though his habit of louding blowing his nose into his hand in the shower cooled the heat in my loins somewhat). All the brunettes at drinks opposed our aversion. They insisted Damian Lewis from Homeland was totally HOT. Can’t see it myself. He’ll always be icky Soames in my eyes. But good on him for waving the sexy redhead flag.

Are you a redhead? Any war stories to tell?