Twilight fans rejoice – those reports that Kristen Stewart and Robert Pattison have reconciled might be true.

“They are living together and have reconciled,” an insider tells Us Weekly.

Lainey Gossip says: “My sources tell me that though things are “fragile” as Pattinson works out his trust issues, they are apparently “more intense than they’ve ever been, especially Kristen. It’s like they’re desperate for each other all the time. She’s trying to see this as something that brought them closer together”.

Her smug smile in these photos – taken as she arrived in Paris on Wednesday morning – says it all.

“I’m not a skinny girl,” Salma Hayek confesses in the latest More magazine.

“I push it. I’m at the limit of chubbiness at all times, but I’m happy at all times. Everybody has a weakness. Mine is food. If you love food and you love red wine and they put you in France, you’re in a good place and you’re in a bad place at the same time. You have to weigh yourself every day, and you have to have an alarm number. When you get to that number, you have to start putting it in reverse,” Hayek admits, adding, “I don’t have stamina in exercise…but I have it in life.”

Salma is married to Francois-Henri Pinault, the French CEO of luxury-brands firm PPR, which handles Gucci and Balenciaga.

“I think if I was not in love, I would probably let myself go faster. Love gives me the vanity to continue. I’m not necessarily vain, but when I gained 50-something pounds in the pregnancy, it did something to me. Since then, at least I make an effort.”

Salma isn’t joking, I worked on a photo shoot with her many years ago and she hoovered down every morsel she could find, even snatching a piece of bread out of the stylist’s hand at one point – the first piece of food he’d managed to grab that day – and gobbling it down. It was quite startling to see an actress eat with such gusto. Viva Salma!

PS I take it back, I’ve just read in The Daily Mail that: “The 46-year-old actress went for lunch in Rome in between photocalls for her latest film Savages and was spotted only eating a cup of strawberries and drinking a cup of coffee. Salma is thought to have initially ordered a bowl of pasta, but apparently changed her mind and opted for the healthy fruit snack instead.”

Following lots of ooohs and aaahs in the press about Tom Cruise “abandoning” Suri by not seeing her for two months, it looks like he might have colluded with People magazine on its latest cover story, “Tom Cruise – Inside His Life Alone”. The story explains he’s been unable to see Suri because he’s been “based in London since mid-August, where he is deep in pre-production for the sci-fi action film All You Need Is Kill.”

“I’ve got to see her,” an emotional Cruise told a friend recently. “I miss her.”

With Suri now based full time in New York City, where Holmes enrolled her inManhattan’s private Avenues school, she has far less flexibility to visit him on set than under her previous home-school arrangement. Several sources say that a planned visit to London in mid-September was called off.

Still, the newly minted first-grader is a fixture in her father’s life, speaking with him several times a day.

“I can tell you that I haven’t had a meeting with Tom that was not interrupted by a phone call with his daughter,” says his friend, screenwriter Christopher McQuarrie.

Lainey Gossip is pretty scathing about the article:  “So that now all he can do, the man who once was Hollywood’s most powerful star, is call up PEOPLE and beg for a puff piece. Fine. Here’s your puff piece, Tom Cruise.”

She also wonders: “But it could all be fixed with an airplane, non? Put the child on a plane, she sees her daddy for a few days, everything is fine.”

J.K. Rowling has admitted she might consider writing another book set in Harry Potter’s world.

“It was murder saying goodbye,’’ Rowling told the BBC. “Now if I had a fabulous idea that came out of that world — because I loved writing it — I’d do it.”

But don’t hold your breath for more of Harry’s adventures.

“Where Harry’s story is concerned, I’m done,’’ she said. Instead, she would craft a “sidestep’’ story, rather than a sequel or prequel.

Meanwhile, Rowling’s new adult novel, “The Casual Vacancy,” will be released on Thursday.

Meanwhile … Dlisted reports that a “minor Gaelic* team were out celebrating their win when they ran into DanRad walking the streets of Dublin at 4 in the morning. They invited him back to their house and he came … DanRad sort of looks like a hipster Gollum here. Dude got so drunk that he drank himself into a different fantasy series.”

“Last year, Daniel Radcliffe said that he and booze were taking a breakfrom each other, because his guzzling of the sweet nectar had gotten so out of hand that he regularly woke up naked, trapped in Hagrid’s beard with a mouth full of what he thought was pond slime. But BREAKING NEWS, DanRad and the sweet nectar have reunited and are back together again.”

For more mortifying pics of the night, including Daniel weeing in the street, click over to Oh No They Didn’t! (oh yes they did!)

The Daily Mail says:  “It has been reported that Kylie Minogue is so proud of her pert posterior that she insured it for a staggering $5million. So when it came to appearing in a spoof body insurance advert for British artist Katerina Jebb, it was only natural that Kylie’s bottom should have a starring role. The 44-year-old singer is seen looking sexily into the camera as she strolls into the room wearing a sexy white gown. But it’s only when Kylie turns around that the true nature of the advert is revealed, because the dress is in fact entirely backless … she makes her way slowly up a spiral staircase in the 40-second video … with a voiceover saying ‘Are your assets fully covered?'” 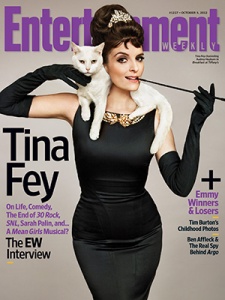 * I’m loving the new Entertainment Weekly with Tina Fey on the cover.

* Priscilla Presley is playing the Evil Queen in a London pantomine of Snow White. And her dodgy plastic surgery kinda suits the role. Here she is in costume at a photo call.