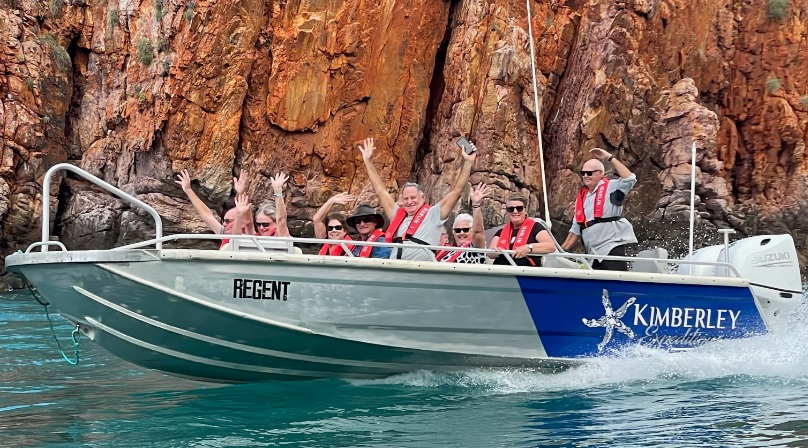 We hit the ground running on Day Two of our cruise on the Reef Prince. The boat heads for one of the Kimberley’s bucket list destinations: the Horizontal Falls.

They’re called the Horizontal Falls because of the fast-moving tidal current that squeezes through two narrow gorges of the McLarty Range, pushing the water into rapid-like formations that produce waterfalls turned on their side. Sir David Attenborough describes them as “one of the greatest wonders of the natural world”.

As we motor to the falls, I have a natter to the trip director, Paul, out on the deck and discover he’s an ex-magazine guy who used to do production work for Ita Buttrose. He made his fortune when there were still fortunes to be made in publishing. Well, not exactly a fortune, but enough to set himself up with a sailing boat and diving equipment so he could explore the underwater world with his wife. When the time came to settle down, he searched the east coast of Australia for somewhere out of the rat race, but couldn’t find anything that felt quite right.

Then he started exploring the west coast and found his version of paradise in Geralton, where he can surf and kite sail to his heart’s content when he’s not working on an expedition cruise.

The first mate Fritz turns out to be another character, he was born in Africa and misses hunting for warthogs to spit roast for his dinner. He’s our driver for the Horizontal Falls and regales us with tales of his wild youth.

We’re expecting crowds at the Horizontal Falls, but there are very few boats around and we have the place pretty much to ourselves. It’s a stunning location.

The crew tell us about the floating hotel that sits anchored near the falls: Horizontal Falls Seaplane Adventures’ luxury houseboat.

Founder Troy Thomas started the award-winning Horizontal Falls Seaplane Adventures company in 2006, but sold it in 2019 to tourism group Journey Beyond to spend more time with his family. He was retained for one year as a manager, so was still working with the company when he died in a helicopter crash last year. He was described as a trailblazer for tourism in Western Australia and his death has devastated the Kimberley tourism community. So sad.

There’s also a very fancy cruiser in the area, owned by Multiplex heiress Denby Roberts, who used to be married to the heir to the Mrs Mac’s pies fortune. The skipper sails the boat around Australia for Roberts and her friends and family, so they can explore the sights. I can’t imagine what the boat is worth, since Denby’s brother Tim sold his superyacht for $70million a few years ago.

After zooming through the falls, we head upstream for sunset drinks, with the crew tying three tenders together for the experience. It’s so special to sit sipping prosecco in such untouched wilderness. I feel a bit teary about how lucky I am to be having this amazing experience as we head back to the Reef Prince.

We take one last look at the unique falls at dusk before returning to the boat for dinner, followed by a little shark spotting (and patting by the crew, eeek!) at the back of the boat.

Click here to read more about our day at the Horizontal Falls over at The Thirsty Travellers.

Song of the day: TLC “Waterfalls”

Who knew whisky pies were so delicious? Fab night out with Oliver at @thewhiskylist
Over and out … officially downsized and celebrating at @deanandnancyon22 with delicious Woodford Reserve Old Fashioneds
Very distinguished
And that’s a wrap … bittersweet as it may be her last skipping comp